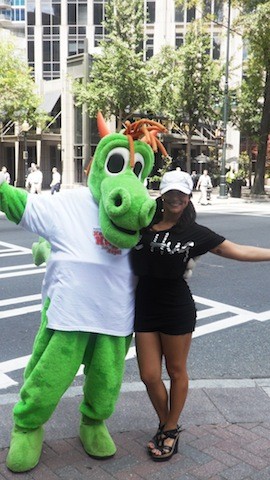 The purpose of the green dragon giving out hugs in “Homer’s Hugs for Hope” is to reach out into the community and spread a little joy to everyone. Spreading hugs not drugs! But they are suggesting a $1 donation per hug which will be distributed to local schools, Community Blood Center of the Carolinas, and the Disaster Relief Initiative.So technically that hug isn't free, but worth every penny. They're hoping to raise $8000 in the hug-a-thon.

Homer will be downtown and at local elementary schools this afternoon and at Knights Stadium for the game from 5:30 p.m. – 8:59 p.m., when the hug felt around the world ends.

I propose in addition to hugging a dragon, we spread the love and all just give out hugs to another. I'll be wearing a Free Hug shirt all day giving out hugs as well. Just please don't squeeze me guys ... I know your little trick about making women press their breasts against your chest during a hug.

I will be giving away hugs and shoes tonight at RE:Public for Fergie's gifting suite for her new footwear line.