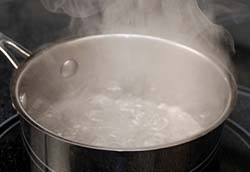 They say a "watched pot never boils" ... but that's bullshit because I just put a pot of water on the stove to make lunch. And as a little science experiment (and to get a nice steam facial), I watched it — and it did in fact start boiling.

The water molecules aren't shy — they're not thinking, "Hold it in. Don't boil ... she's watching us!"

Theory debunked. Perhaps they should change the saying to "A watched phone never rings" ... because that's more accurate.

It may vibrate from a text (most likely not from the person you're waiting on a call from), but it will never ring if you're sitting there waiting for it to. 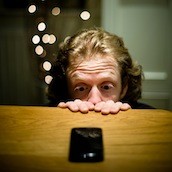 Not the boss you just interviewed with, not the friend you pissed off, and especially not the person you like and just started dated. Only when you're out living your life will the phone ring, for you to answer at your convenience. It's a law of attraction — if you're sitting around anxious, staring at your phone wondering when they're going to call, all that negativity will keep the phone from ringing. But if you just go about your business knowing that the phone will eventually ring, it does. It's even more scientifically accurate than the boiling water theory.

And no, closing your eyes will not help. A watched phone will never ring.