Don't shit, or have sex, where you eat

I'm about to go where no woman blogger has gone before ... to the bathroom.

You can read advice columns about dating and maintaining a passionate relationship, but what about when the shit hits the fan? And I mean that literally.

You're dating a guy. It's still relatively new, in the sense that you spend the night together, but he doesn't know you poop or fart yet. You guys go to dinner and go back to his place for sexy time. But your body is busy digesting your food and is ready to dispose of it. What do you do?...what do you do?

How do you make going #2 a one-person affair ... and go in his house without getting caught?

I called in back-up to answer this question for you ladies. Those for whom I seek my own advice from like volunteer therapists and muses — my girlfriends.

"The shower trick. Works every time. Tell him you want to shower before bed, run the water and poop. Then jump in the shower and wash off, using soap and something that is smelly so you can dilute the poop fumes." ~a girlfriend

"Take a shower! He also likes this usually cause I come out all wet, smelling good and naked but really I just wanted to have an excuse to shit without killing the mood. Girls can be sneaky, too." ~a different girlfriend 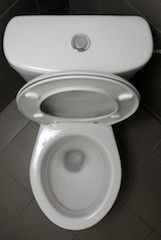 "I'm a fan of the good ol' fashion fan. Just turn on the overhead fan. It masks the sound and clears the smell more quickly. Guys typically don't have air freshener in the room (if they do, maybe look around and make sure they have both testicles) so if it's really stinky you can take like the shampoo or liquid soap and wave it around the room with the cap open (that way it smells like their usual products versus perfume, or worse, shit). But realistically, girls have a keener sense of smell than guys, so they probably won't even notice. Plus, a big poop is easier to explain than weirdly waving around their hygiene products." ~another girlfriend

"LEAVE! Make up a reason for having to leave or go home. Tell him you got to let your dogs out and use that time to go to the bathroom yourself." ~another girlfriend

"When I'm traveling with him I tell him I'm going to get a snack or some drinks and use the lobby bathroom." ~another girlfriend

Or, you can take my married girlfriend's advice: "I'll sit there and take a poop while he's shaving at the sink and then dutch oven him. I don't care. Girls shit, piss, burp and fart .... just cause we have a vagina doesn't mean we aren't human. We have three holes to control and men only have two. Cut us some slack."