Gah. Why didn't they have cool toys like they do now when I was a kid? Here I thought my Barbie and her red convertible — which I had to push around the floor myself — were cool. Now you've got electronic gadgets coming out of the ying yang. I bet now Barbie drives her red convertible on her own ... while texting.

Toys 'R' Us — which is still surprisingly around despite the corporate giant Wal-Mart and its lower priced toy aisles — recently released its 2009 Hot Toy List. You can read the expansive list here.

What I'm more interested is the Fabulous 15 picks — the retailer's top picks for best new toys of the holiday season. See below (listed in alphabetical order). (Via ShoppingBlog.com) 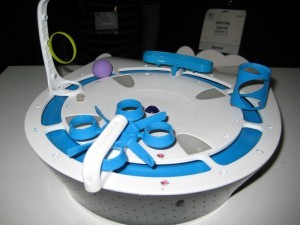 Check out this video of a guy testing out Mattel's Mindflex, a very 21st century gadget that reads your brain waves in order to move a ball through a hoop. Mad cool. (video via GadgetReview.com)