This past weekend, the Mint Museum of Art held the 2nd Annual Charlotte North Carolina Fashion Week right outside its front door. Pulling up to the parking lot, seeing the white tents billowing in the wind, women and men running frantically carrying garment bags filled with fabulous clothes, I felt a surge of excitement rush over me. I was about to partake in the viewing of some of Charlotte's, and the world's, best fashions.

Perhaps I set the bar too high, but the excitement I felt first entering the lot was not the same feeling I had upon my exiting. While a few pieces really stood out in my mind as true greats, it was difficult to forget everything else that had left me desiring more. It seemed that there were plenty of unique and beautiful concepts that simply fell short in their execution and final product.

The night began with a couple of boutique shows, LA East and Reign Fine Apparel. The hip, savvy fashions of LA East were very fashion-forward and urban oriented, with the model’s attitudes coordinating well with the apparel. All in all, the runway show was well organized and carried a nice concept behind it, and kept me entertained as well as my eyes busy taking in the fun, youthful clothing.

This is where Reign seemed to leave me high and dry. When the host of the event Barbara McKay was talking about the boutique, I was on the edge of my seat, ready to see gorgeous gowns and cute cocktail dresses, but instead ended up feeling as if I were in attendance at a high school prom fashion show. The silhouettes of the dresses seemed stiff, obviously because of the choice of material, but also in the cut of the bodice. While the vibrant colors of some pieces were refreshing in the designs, the wrinkled, curtain-like feel of the fabric ruined any chance that the dresses may have had. The cheap-looking lace accents didn’t help either. Amidst slips turned into evening gowns and ice skater wedding dresses, the occasional gem, like the beige lace and chartreuse green gown with pockets, popped up. But even a formal dress with ample storage compartments couldn’t save face.

When we reached the meat of the show, the actual designers, things seemed to be looking up. The models were smoother, the concepts tighter, and I was getting a little less of a Project Runway feel. The first was Luis Machicao Couture, and it definitely got my attention. I’m not entirely sure of the theme that the designer was going for, but it was very 1950’s Asian Vampiress, with no shortage of red or Oriental influence. There were some interesting design decisions, such as the sheer top with strategically placed feathers, but let us keep in mind that interesting does not always equal amazing. A lot of the silhouettes felt stale, with the kimono-inspired shapes and mandarian collars, as well as the more modern style halter dresses that seemed awkwardly placed in the collection. And while the audience appreciated the lack of material exhibited in the men’s collection, the juxtaposition between the lavishly dressed ladies and the semi-nude men seemed more than a bit discongruent and as if they were from a completely different designer.

The beautiful and simple bridal designs of Kimberly Pixton were a wonderful refresher from the previous attempts. Her pieces, though quite traditional for the most part, were exquisitely displayed and well made. Her decisions in model styling lent a unique twist to the classic dresses, adding plenty of interest to the show, despite the lack of true innovation in designs. 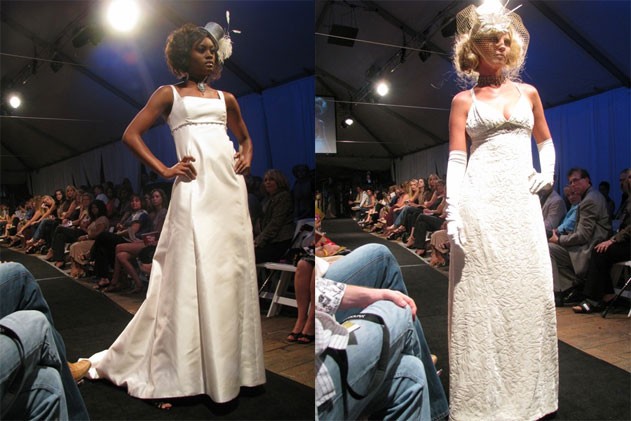 With three designers remaining, all of which hailed from Europe, I was holding on to my hope that I would leave having seen something truly original; something that I would not be able to stop talking about. First, with Omniamei by Slavica Aleksijev, I was thrown a lot of hand-dyed fabrics and hand-made appliqués, which, while I admire the effort, tended to look a little too Fibers 101 for me to be appreciative of.

Then when Alen K’s show began, instead of cutting edge European designs, it all felt a little too Forever 21 to me. These were all outfits that I felt I could easily find by taking a short trip to the mall, not something that I’d look for on the runways of Paris.

Finally, Amela Radan, the last designer to show, sent her models down the runway, draped in screenprinted silk and sheer panels, with scenes of city streets and the Statue of Liberty, as well as a few paintings. Teetering on the fine line between beautiful and tacky, the photographic prints on the otherwise gorgeous, flowing dresses and pants suits, worked out OK, though at times overpowered what would have been even better without it. Sometimes innovation harms more than it helps, and truly, less is more.

Being a fashion week virgin, I’m not certain that I should have gone into this expecting New York in the Queen City, but even so, I can’t help but feel a little disappointed in the quality and lack of creativity that was shown. Perhaps we are still working out the kinks and Charlotte will beef up their fashion presence, and be able to really impress me next year.