August 19, 2015
1 comment
There are a good number of reasons why Kindred Restaurant in Davidson was recently named to Bon Appetit’s 2015 list of 50 Best New Restaurants in America. 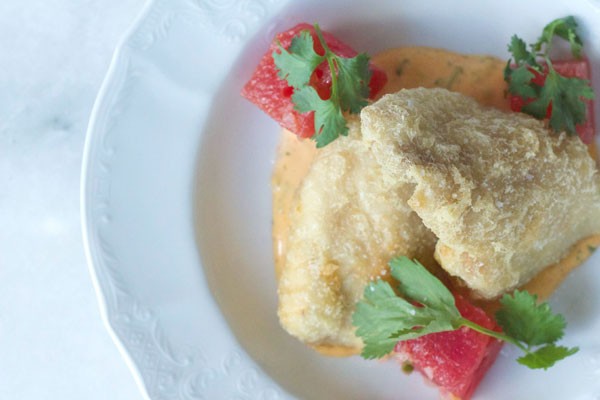 The ambience and warmth of the interior, reflective of its history as a century-old pharmacy, is one. The attentive servers and expert bar staff are another.

Chef Joe Kindred’s intense focus and attention to detail are notable while Katy Kindred’s front of house wizardry and wine expertise add to the magic, too.

Yet, there is something else at hand, a key element that registers almost completely in the subconscious– nostalgia, that thing that stirs the memory and transports one to their happy place. In this case, the McDonald’s drive-thru window.
Yes, Joe Kindred has found a way to make his Korean Fried Chicken taste like a McNugget. Of course, with a few flourishes. The dish, which can be found on Kindred’s dinner menu, is made with chicken thighs that are dredged and fried to an uncanny science.


Chef Kindred and his team found a way to pull the moisture out of the chicken to allow for more intense surface cooking which creates that feathery McNugget crisp. You know the one, when you open that rectangular box of nuggets, peel the lid off your favorite sauce (mine was the honey), and dip in with that soigne scooping motion before taking that first bite. That audible crunch, the stuff of Happy Meal dreams.

Similarly, Kindred’s Korean Fried Chicken arrives well seasoned and wispy with batter made of cornstarch, finely-ground “00” flour, baking powder, salt and, wait for it, vodka (the alcohol eliminates the gluten structure which keeps it crispy instead of doughy). The chicken itself maintains a comforting tenderness thanks to the high heat that cooked the outside to perfection and created a tenderizing steam for the meat. Rosy cubes of compressed watermelon infused with jalapeno, shallots, ginger, champagne vinegar and olive oil accompany the dish.

The “Korean” element of the KFC at Kindred is a gojuchang aioli made of a combination of aioli, gojuchang (the essential Korean red pepper paste used as a savory, spicy, umami element to Korean cooking), creme fraiche and fresh herbs.

The result is a spicy, creamy, herbaceous compliment to your nugget o’chicken. No need to peel the lid off this one.
The Korean Fried Chicken at Kindred obviously transcends the drive-thru experience, but somehow recalls it at the same time which, if you ask me, is where the magic happens.

You’ll find other nostalgic nods on the menu too, like birthday cake for dessert and a throwback to Parker House rolls in their lauded milk bread. It’s new, yet familiar.