As the year comes to an end, people across the globe light up the night sky with blazes of cacophonous fireworks. Cultures around the world have long used candles and bonfires to brighten the depths of winter. Yet one of Charlotte's first food events of 2015 invites to you step into the dark side for a night of adventure. 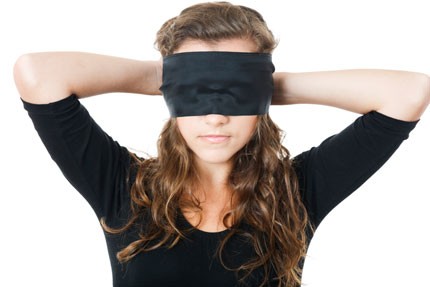 On Jan. 10, Good Eats and Meets of Charlotte presents Dining in the Dark, "a journey of taste, sound and touch" at Ballantyne Hotel. Centered on a multicourse meal by Executive Banquet Chef Michael Rayfield, the evening seeks to raise funds and awareness for the Foundation Fighting Blindness, by giving guests a taste of the darkness familiar to the visually impaired.

Usually I'd try to tempt you to a meal like this by dropping some ingredients or dish descriptions right about here. But diners will even be kept in the dark about the menu until after the last plate is cleared. Never fear though, Rayfield's team is unlikely to toss sheep eyeballs your way. "I'm giving them free rein," says Richard Gruica, the event's organizer, "but we try to keep ingredients pretty commonplace."

Still, the "dark" in this title is more than figurative. After a complimentary cocktail and introduction to the evening, guests will be stripped of their sight with "cosy" velvet blindfolds before being led to their tables. There, in a darkened room, they will enjoy the ensuing five-course meal using their senses of touch, smell and of course taste.

Aside from being an experiment in oft-underappreciated senses, the adventure gives guests a glimpse into the daily challenges faced by those with limited or no eyesight. "[Diners] end up compensating for their vision by talking louder," says Gruica. He encourages them to make a game of guessing what each dish is composed of, highlighting our dependence on visual cues.

The organizer's enthusiasm for these events, which he's arranged on-and-off for the past three years, comes in part from the cause it supports. "One of my family members was visually impaired, and it was unique to see how she coped," he says. "When I was small, I would close my eyes and duplicate what she was experiencing." In creating the same environment for guests, he seeks to raise both money and awareness for The Foundation Fighting Blindness. Established in 1971, the Foundation has raised more than $500 million, funding research into retinal diseases such as macular degeneration.

Gruica plans to make these truly "blind tasting menu" dinners a monthly event in Charlotte. He has already lined up locally noted chefs through June, including Heirloom's Clark Barlowe, the Asbury's Chris Coleman and Paul Verica of Heritage in Waxhaw. In the meantime, interested diners are encouraged to buy their tickets quickly, since all previous Dining in the Dark dinners have sold out. And who wants to be left in the dark for such a fascinating experience?

Tickets are available online for $75 a seat, with a couples' discounted price of $125.