If chewing on some beer-infused baked goods and downing a glass of Wake 'N' Bake sounds like the perfect way to help a good cause, stop in at Salud Beer Shop this Sunday, Dec. 7. Terrapin Beer is teaming up with Salud and Pure Intentions coffee to celebrate the 10th anniversary of Terrapin's Wake 'N' Bakecoffee oatmeal stout, while raising money for Changed Choices.

Supporting women currently in or transitioning out of incarceration, Changed Choices offers inmates guidance and support to make positive life decisions. The bake-off proceeds will be used to help provide their children happier holidays. "It's not necessarily going for toys," says Terrapin's Jennifer Davis. "It may mean food for their children or just keeping their houses warm."

The competition, begun a couple of years ago in the brewery's hometown of Athens, Georgia, comes to Charlotte for the first time this year. I asked Davis why a bake-off to celebrate a beer? "It's a great way to show that you can do more than just drink the beer," she says. "It's just a fun thing to incorporate food and beer together."

Ten local chefs have been challenged to create unique "munchies" incorporating Terrapin's seasonal high-gravity beer. For $25, tasters get to sample and vote on their favorite, as well enjoy a free pour of the beer of honor. They'll also receive a logoed mug, thanks in part to Pure Intentions Coffee, who will be providing the caffeine hookup for the event.

Started 12 years ago, Terrapin Beer distributes half a dozen year-round brews and a handful of seasonals in the Southeast and up the east coast. Wake 'N' Bake is one of its four "Monster Tour" beers, high-gravity varieties with more than 8 percent alcohol. Flavored with a proprietary blend of coffee developed by Athens roaster Jittery Joes, the stout's most bitter notes are smoothed over by the oatmeal in the brew.

While this year marks Wake 'N' Bake's decennial, Davis hopes to make the bake-off an annual event, expanding the number of competitors as Salud works on its own expansion. This year's contenders include chefs from restaurants, food trucks, two culinary schools and Fu Manchu Cupcakes' Andy Jackson. 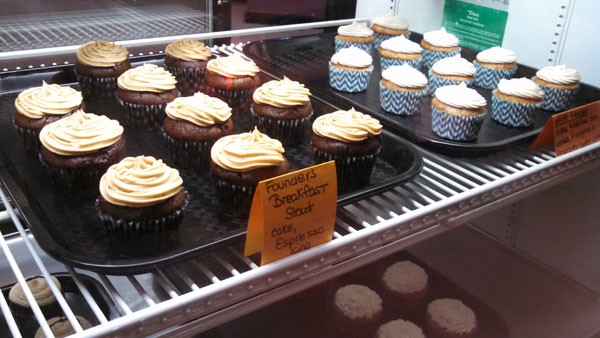 Although he's been baking professionally for four years, Jackson's only had his storefront open off of Central Avenue since April. A commercial plumber by trade, he is entirely self-taught and has made baking with adult beverages a specialty. "I don't do chocolate, vanilla or friggin' red velvet," he says with an impatient shake of the head. "Alcohol, beer, hot sauce and bacon is what I specialize in."

While baking with alcohol requires some recipe adjustments, Jackson says it's the yeast in beer that really affects the flavor. "Everything tastes different," he explains. "Except Belgians. All Belgian beers taste … like banana bread." The cupcake master is cagey about what he's planning for Sunday, saying only he's on his third recipe so far.

I'm willing to bet it doesn't taste like banana bread.

50 taster tickets are available for sale online, with a limited number of additional passes available at the door.