As a girl in Ohio only reading of it in novels, I had to imagine sorghum as dark, sticky sweetness poured over southern breakfasts of biscuits and grits. But I've lived below the Mason-Dixon line for nearly 15 years now, so when I heard that this year's crop was coming in I thought it was high time I educated myself. 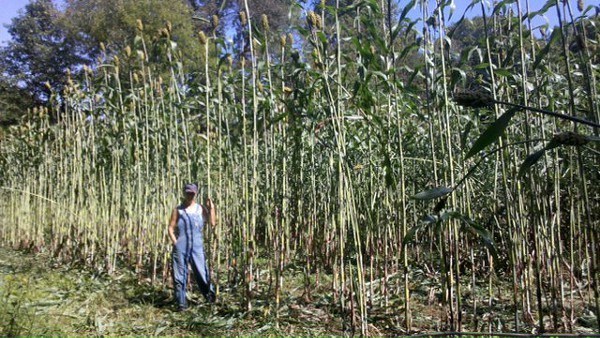 Part of a family of grasses that includes corn and sugar cane, different varieties of sorghum produce grain, animal feed or molasses. When Christy and Michael Underwood started their farm in Lawndale eight years ago, they embraced the area's longstanding culture of molasses sorghum as part of a move toward self-sufficiency. "It's a sugar we can produce," says Christy, adding with a laugh, "You need some sweetness in your life."

Sorghum cane, which can grow as high as 14 feet, is a utilitarian crop. Seeded in May and harvested in October, it grows in relatively poor soil with minimal care, resists both drought and pests, and can serve as fodder for pigs or cows. Still, for small farms like Underwood, harvest and processing are a laborious operation.

"It's all done by hand, machete work," says Underwood. With the help of a few volunteers, they remove the seed heads and leaves and feed the canes through a miller that crushes them to remove the juice. Requiring three to four days to harvest and boil down the syrup of their usual one-acre crop, the farm might bring to market anywhere from 40 to 85 gallons of finished molasses.

About four years ago, Ashley Boyd, pastry chef at 300 East restaurant, purchased her first jars of Underwood sorghum. A native of Charlotte, she had grown up with cane molasses, which supplanted sorghum in many southern kitchens. Today, the growing trend to source ingredients more locally has resulted in a renaissance for the southern sweetener.

Boyd likes to use sorghum in place of sugar cane molasses because of its more "mellow" yet complex taste, with hints of acidic sourness and bitterness. "I find I use it more as the weather gets cooler," she says. "It's got that deeper flavor that lends itself more as a fall menu item." She has also discovered that cooking with locally-milled molasses sometimes requires adjustments, as the taste varies year to year. "Some years it's got a way lighter flavor and some years it's got a more assertive flavor."

Recently, Boyd included a sorghum ginger cake with an apple dessert, and created sorghum molasses cookies for her butterscotch ice cream sandwiches. But it also plays well in savory dishes. The chef suggests using sorghum "anywhere you would use a little bit of molasses to give a little more depth to the sweetness," such as marinades or glazes for meats, barbeque sauces or candied bacon.

If you're as intrigued by I am by this unique southern flavor, stop by the Underwood's table at the Charlotte Regional Farmers Market this Saturday. With a smaller than usual crop, this year's molasses won't be slow in disappearing.