It's already time to talk turkey | Eat My Charlotte

It's already time to talk turkey

I too was taken in by Benjamin Franklin's assertion that these wild fowl deserve recognition for their wiliness, but Carl Wagner of Carlea Farms has since disabused me of that notion. He's raised our Thanksgiving turkeys for the past five years, and has regaled us with stories of bird-brained escapades and frustrations. 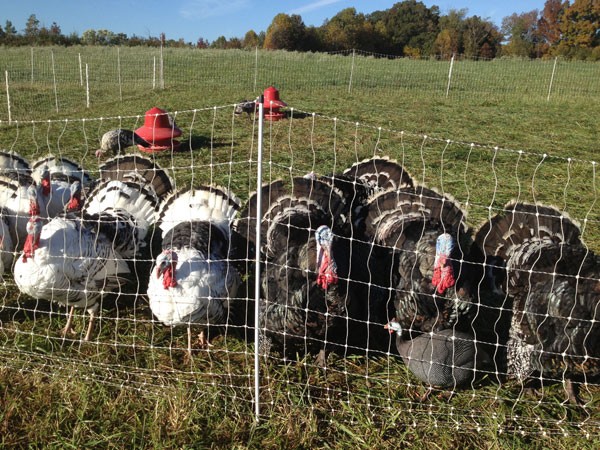 It took us a few years to get the timing right to be added to Wagner's turkey list, because who's thinking about Thanksgiving in the middle of summer? Yet that is when the young poults arrive on local farms and settle in for a few months of pastured plumping. Sammy Koenigsberg is also raising turkeys at New Town Farms in Waxhaw, where he recently welcomed 200 of the little bird brains.

Both farmers have had experience with raising heirloom turkey breeds and have moved back to the standard broad-breasted white breed favored by more industrial farms. The slower-growing heritage breeds not only require additional time and feed, but as more agile fliers, must be corralled into protected runs every night for protection. On small four-season farms, turkeys are a sideline that can only receive limited resources.

Regardless of breed, turkey raising is fraught with risk. From days-old hatchling to market-weight birds, flock losses run 20 to 50 percent; since bringing his 50 chicks home last month, Wagner has already lost 15. Besides predation and disease, the surprisingly fragile fledglings tend to die off inexplicably.

As a result, don't expect to snap up these pasture-raised holiday centerpieces for rock-bottom prices in the week before Thanksgiving. They go for at least six dollars a pound, and both farmers feel strongly about the value of their sustainable flocks.

For Wagner, the primary benefit is eating "clean food," meat absent of antibiotics or hormones. "They're raised as nature intended," he says, "outside on grass." What limited supplementary feed he offers is soy-free, non-GMO and organic.

Koenigsberg echoes that philosophy and cites the birds' quality of life. He contrasts pasture-raising them against the industrial system of allotting a square foot per bird in a huge barn, without fresh air, sunlight or exercise. "We use a system that sustains their life naturally, not chemically," he says. Moving from field to field, his turkeys will mow down five acres of grass in the 13 weeks they spend on his farm.

If sustainable agriculture and happy birds aren't enough to pique your interest, consider your taste buds. According to Koenigsberg, his turkeys' superior flavor reflects the higher nutritional content gleaned from grass, bugs and other elements of their varied diet. "Your tongue tells you about the vitamins in your food," he says.

Finally, humane slaughter minimizes taste-affecting stress hormones in the birds' flesh. Instead of transporting them to busy slaughterhouses, both farms process their turkeys either on-site or at a nearby farm. "We take great pains creating as little stress as possible," explains Wagner.

I doubt that these dumb birds appreciate all the extra work these farmers go through to give them a better turkey life. I, on the other hand, am smart enough to recognize a good thing when I taste it.

Carlea Farms has a few spots left for turkey reservations; New Town Farms will begin selling theirs in mid-September. Check their websites for contact information.