Get your ripe figs now

I have to confess, for much of my life I confused figs with dates. They were both seed-filled, squishy, brown fruits that I didn't eat often. But a few years ago, Pat Sain of Pat's Pickin's handed me a pint at the Matthews Community Farmers Market, and I started a new friendship with this dumpy little fruit. They're in season again right now, and you've only got a couple more weeks to enjoy their sticky sweetness. 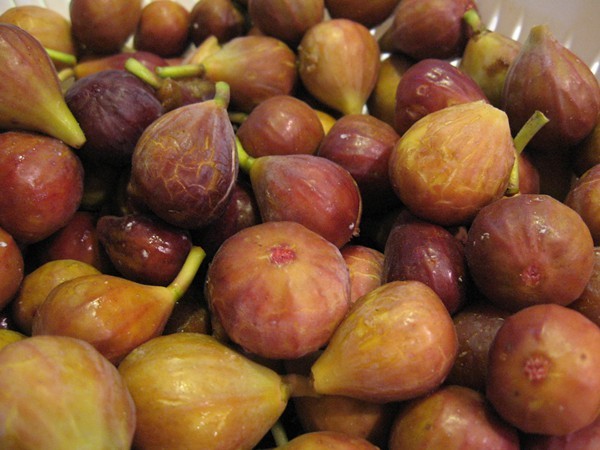 Native to the Mediterranean basin, these members of the ficus family do well in the American South. The ones Sain offered me were called brown turkey, probably the most common type in our markets. They and Celeste are the only two varieties hardy enough to survive our western Piedmont winters; the further east you go, the more varieties you can find.

According to Sain, growing fig trees isn't hard, though they do need a little protection in the winter. "Usually a fig bush is up against somebody's barn or outhouse or something," he says. Since they normally freeze back during winter, they typically top out at about eight feet tall. While the trees themselves are fairly disease- and maintenance-free, the fruit is another story.

Ripe figs attract swarms of wasps, and the wet leaves can cause some people to itch, so harvesting isn't a lot of fun. In addition, once off the tree, the fruit must be eaten or preserved within a day or two. To maximize his harvest, Sain picks them just before perfect ripeness and stores them in the refrigerator until market day.

And then what do we do with them? "Loads of people like them raw," he says. I personally used them in a preserve. But I wondered what a chef might make of them, so I called Adam Reed from Santé, who simply crosses Trade street in historic downtown Matthews to buy figs from Sain.

It turns out Reed also faces the quandary of too much of a good thing. "I've had people come in just bringing me figs," he says. "I guess their bushes are just going crazy."

Besides making his own preserves to serve with foie gras, Reed has a couple of other approaches. First, he sears the figs in butter before braising them in balsamic vinegar and adding them to a salad of arugula, which he also buys from Sain. "I can go through a ton of figs just braising them," he says. When even that doesn't use up his supply, he's turned to his dehydrator to preserve them.

"I like them even more when they're dehydrated," he says, "because it concentrates the flavor and the sweetness." He simply washes the fruits and leaves them in the dryer overnight. Afterwards, he'll use them in any number of dishes, including a favorite braised red cabbage salad served in the fall, and a yet-to-be-determined dessert.

So maybe I was wrong. Maybe you have more than two weeks to enjoy the chewy sweetness of these little fruits. Just watch out for wasps.