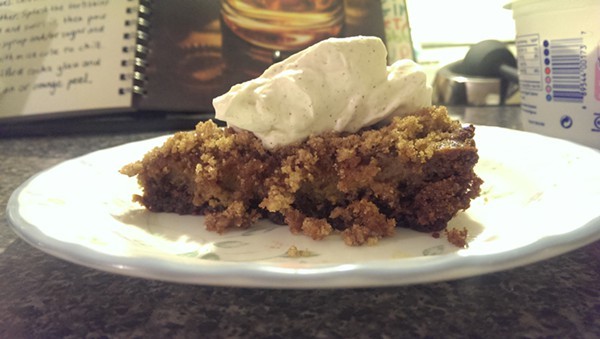 Oh my fucking good god gracious, I love pumpkin pie. Not that you fine people give a shit, but I assume you do, too. Or, at the very least, I'm not going to trust you if you don't.

That's because pumpkin pie is goddamned amazing. Forget your pumpkin spice mocha grande whatever lattes and your apple ciders, pumpkin pie IS fall. It's a freaking slice of autumn; it's the nutmeg and cinnamon-crammed exclamation point on the utter majesty that is Thanksgiving.

But that deliciousness comes with a far worse and utterly lame underscore: the crust. Because as amazing as that pumpkin pie is, you have to deal with some boring, flavorless cardboard crust that someone probably dragged out of the frozen-everything aisle and unceremoniously shoved in the nearest oven to get to it.

Doesn't pumpkin pie deserve something better? Doesn't something so creamy and pumpkiny and beautiful need something equally beautiful and delicious supporting it?

Yes. Yes it does.

That's why I threw that boring-ass crust out the window and made a gingersnap crust instead. Also, cinnamon whipped cream, because who doesn't love that stuff? Nobody, that's who.

Directions:
First, crumble up the gingersnaps into a food processor. You might have to use some muscle to break up those cookies, so pretend you actually go to the gym for a few seconds while you do it. Maybe grunt or something.

Melt your butter in a small pan over medium heat. Now, this is the extra special secret trick that's going to take this crust from "good" to "I have to change my pants now, excuse me." Let the butter melt, and then keep cooking it until it starts to turn brown. If it smells kind of nutty, it's ready, and it'll make your crust taste nutty and awesome too.

Pour the butter into the food processor with the gingersnaps and give them a few pulses until they're mixed together. You want small pieces, not ginger-dust. Don't overdo it.

Use something heavy and flat, like the bottom of a big glass, and press the crust into the bottom and sides of a 9 inch pie pan. The crust isn't going to be picture perfect, and it'll probably crumble a lot. It's OK, it's supposed to do that. Just do the best you can.

Wrap the crust with tin foil and stick it in the fridge for 20 minutes while you preheat your oven to 325.

After 20 minutes, take the crust out, put it in the oven for 15 minutes, and start making your filling.

Once the crust is ready, take it out of the oven, turn the heat up to 350, and pour in your filling. Make sure you put tin foil around the visible crust like in the picture; otherwise, you're going to have a burnt crust on your hands.

Stick the pie in the oven for another 30 minutes while you make your topping. This part's easy too: just mix together the brown sugar, salt and cinnamon.

After the 30 minutes is up, sprinkle the topping on top of the pie, turn the heat down to 325, and put it back in for another 25 minutes.

Now's a good time to make the whipped cream. Again, easy stuff: pour the cream, powdered sugar, vanilla and cinnamon in a stand mixer with a whisk attachment. Crank it to medium-high, watch until peaks form, and taste-test it a few dozen times while you wait for the pie to finish up.

Once the pie's done, let it cool to room temperature, get some whipped cream on top, and put the whole thing in your mouth. Oh, and make sure you stick it in the fridge when you're done. Pumpkin pie's just better when it's nice and cool.

Speaking of cool, check out some cool beats to go with that pie. It's Yusef Lateef with a classic: "Love Theme From Spartacus":

Look. If you want to pour some delicious, creamy pumpkin goodness into a crust with roughly the texture and flavor of paper mache, by all means, do it. Ruin Thanksgiving. But if you want to make a pumpkin pie that people'll actually talk about, then you got to put a little more muscle into your crust. You got to make people want to come to the table for the whole damn pie, not just the middle part.

Don't half-ass your pie, folks. That's the lesson for this week. Happy Thanksgiving.