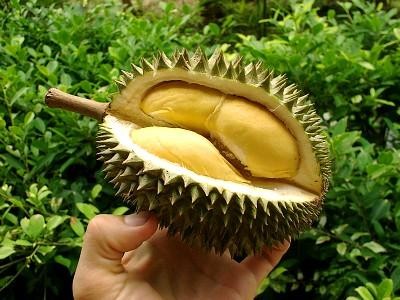 Tucked inside the Overseas Market, a large international market off Woodlawn and South Boulevard, amongst the eye-catching aisles of spices and herbs, near the fresh whole fish on ice and flanked by coolers stocked with frozen animal parts, you will find a tiny cooler holding single-serve containers of exotic ice cream made with durian fruit.

Maybe you've heard of this "King of Fruits" from Southeast Asia? The durian fruit is a spike-covered enigma equally loved and hated by people all over the world. It is known for its powerful aroma and intense flavor that has often been described as offensive by some and is revered for its pleasant uniqueness by others. Durian fruit has even been banned from public places because of its malodorous character. In Asia, "No Durian Signs" replace the "No Smoking" signs. Descriptions of its flavor run the gamut from rotten garbage to gym socks and turpentine. Sounds delicious, right? 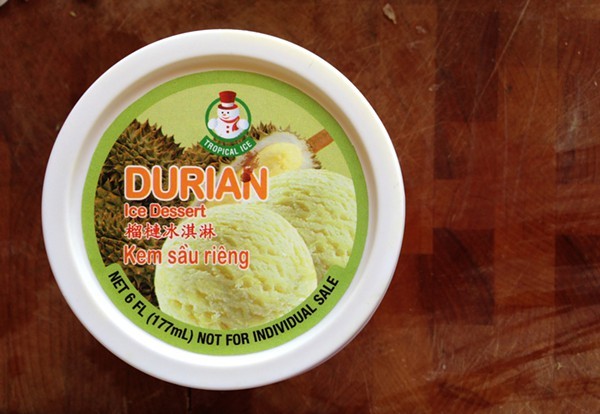 Call it what you will - curiosity, sadistic punishment or an invigorated taste for adventure, I set out to try the durian fruit in its tasty dessert form. Digging into my first single-serve cup, the aroma is inexplicable but not overpowering. Descriptions of the actual fruit itself report something more memorable, a noxious smell that hijacks the air before the fruit is even cracked open. The flavor is another thing.

My first bite of durian ice cream came in three distinct waves. The first, an unidentifiable taste that can only be described as an odd popcorn-like flavor. Next, the troubling phase, where my senses were flooded with the taste of vomit and old trash. At this point, I was tempted to spit it out, but I didn't. The unpleasantness lasts only seconds before a rather tropical, passion-fruit like finish rounds out the final phase, a reward for surviving the offensive wrath of the durian fruit.

Oddly enough, the roller coaster of flavor is just intriguing enough to have you going back for a second scoop. The curious flavor will have you pondering its complexity by the spoonful.

Check out the latest issue of Creative Loafing for more oddball eats. I figured the new year is high time I test the limits of my palate by exploring new foods.

Keia Mastrianni loves to tell stories about local food products and the people behind them. When she's not scouting out local discoveries, she is happily buzzing about her kitchen, nosing through cookbooks and taking way too many pictures of food. She maintains a happy food blog called The Sunnysideup where she shares recipes and culinary adventures.