As soon as I walked into the large airy Atherton Mill and Market on Friday morning, the scent of something unmistakably sweet welcomed me at the door and ushered me in. 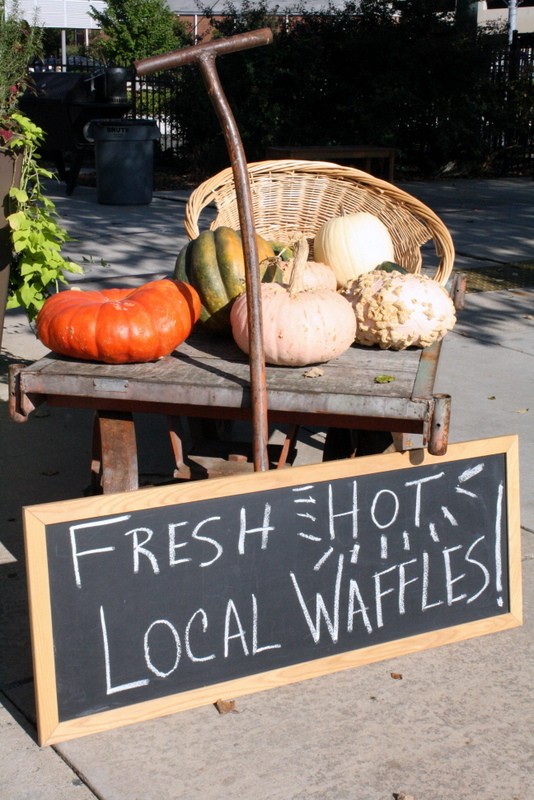 I wandered in to see the source of that intoxicating scent and found Chris Duggan, owner of Cast Iron Waffles, hard at work making his signature Belgian Leige waffles. When asked why he chose Atherton Mill as the first expansion from his storefront in Ballantyne, he replied: "I like the feel of the market and I like this area of town. I like being able to connect with out customers when they come through the market. Here, I can talk to people about how different our waffles are than the waffles they ate as a kid."

So how are these waffles different than your standard waffle? Cast Iron Waffles are made with brioche style dough and infused with Belgian pearl sugar. According to Duggan, this is the exact same kind of waffles you would find being sold by Belgian street vendors. He says a lot of their customers are actually Belgian and some even think his waffles are better than the ones from their homeland. 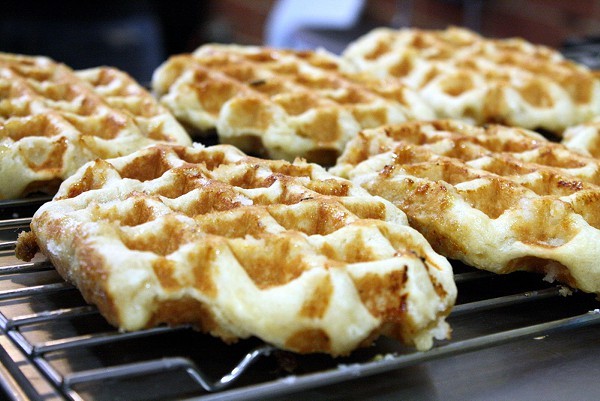 The iron that produces these dense waffles weighs over 100 pounds and cooks the waffles at an even 340 degrees, a lower temperature than your standard waffle iron. And because it's cast iron, the temperature is distributed evenly so waffles don't end up with parts that are cooked more than others. 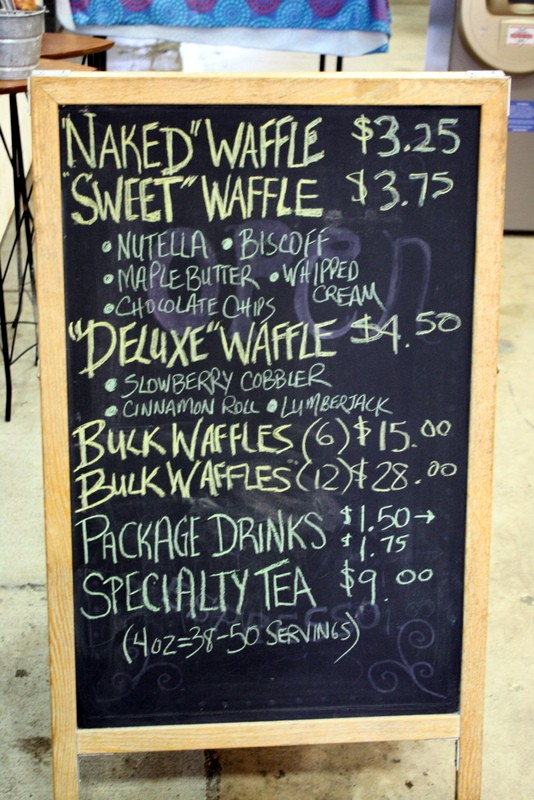 Duggan dresses his waffles up with numerous toppings. For traditionalists, there is the Naked Waffle, which is lightly dusted with powdered sugar ($3.25). For those of you who like dessert for breakfast, try one of the sweet waffles ($3.75) and choose from Biscoff, Maple Butter, Whipped Cream, Nutella, or Chocolate Chips as your topping. And if your motto in life is "Go big or go home," opt for a deluxe waffle, which is the choice of the Slowberry Cobbler Waffle, the Cinnamon Roll Waffle, or the Lumberjack Waffle.

Not available for purchase and especially made for sugar fiend journalists is the sampler platter. Duggan cut a waffle in fourths and dressed each with the toppings of my choice so I could report the findings back to you. It was very scientific.

From left to right, starting at the top, I tried the:
- The Cinnamon Roll Waffle - covered with sugary glaze and cinnamon
- Lumberjack Waffle - topped with maple butter and crumbled bacon (one of their most popular)
- The Naked Waffle - dusted lightly with powdered sugar
- The Biscoff Waffle - topped with Biscoff, a buttery spread, the consistency of peanut butter, but made with Biscoff cookies (the same cookie they serve on Delta Airlines flights)

I thoroughly enjoyed the sugar high that ensued for the next two hours, but my favorite was the Biscoff. Biscoff spread, like its cookies, has a salty sweet combination that I can't get enough of. Paired with a piping hot, just off the iron, Belgian Leige waffle, I was won over.

You can check out Cast Iron Waffles at the Atherton Mill Market from 8 a.m.-12 p.m. Thursday and Friday or from 9 a.m.-2 p.m. on Saturday. Additionally, I have it straight from Duggan that plans are in the works to open another storefront for the waffle shop in the SouthPark area in the near future.