Do your ears perk up when you hear "cake"? Mine do. Well guys, have I've got a cake for you.

It looks so sophisticated, this cake's got me feeling like Miss Fancy Pants baker girl. It's called the Perfect Party Cake, courtesy of baker extraordinaire Dorie Greenspan and her book Baking: From My Home to Yours.

Four lemony layers of white cake are married together with raspberry filling, lemon hot meringue buttercream, and finished with a feathering of shredded coconut. Nothing makes my mouth happier than lemon and raspberry cake combos. The cake is "perfect" because the crumb is delicate, the flavors are fresh and bright, and the presentation of the cake is beautiful. The cake also lends itself to many variations with alternate frostings and fillings. 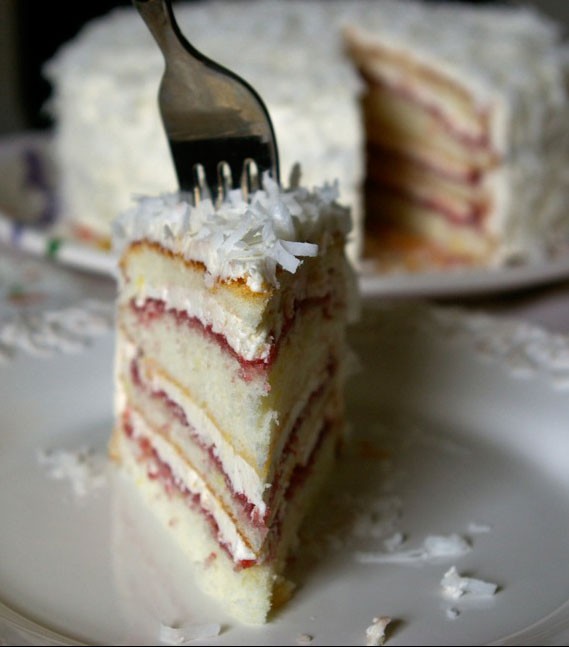 This was my first time making a hot meringue buttercream, and I'm a convert. It was so thick and silky smooth – zero grittiness from the sugar because egg whites and sugar are melted over a double broiler before getting whipped into an oblivion. Yes, it did require three sticks of butter, but it's amazing, so I'm willing to overlook that. Plus, who wants a cake that is skimpy on the frosting?

At first I was a bit concerned because the butter, egg, sugar mixture was a big liquidy mess. There was no possible way it'd come together and thicken ... or so I thought ... but after 6 minutes of whipping, it started getting shiny and thick. Almost mayo-esque. It's ok if your frosting comes apart mid-whipping. Just keep on going and it'll pull together. (Tip: You might have to drape a kitchen towel over the stand mixer to keep the frosting from flying out and spackleing your kitchen.)

Once baked, the two cakes had to be halved to make four layers, and as you can see, one of my layers is a bit thicker than the others. Oopsies. Anyway, moving on ... here's how to assemble the cake: Layer of cake, layer of raspberry, layer of buttercream, repeat another two times. Layer last piece of cake on top, smother entire cake with buttercream, press shredded coconut all over cake. Easy! Now just cut, eat, repeat. 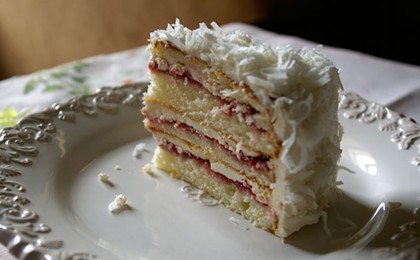 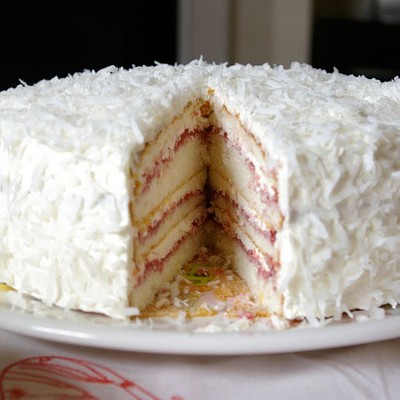 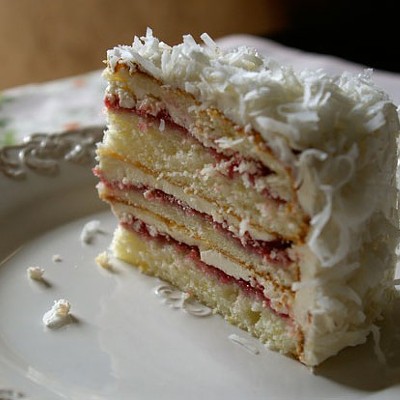 from Dorie Greenspan’s Baking: From My Home to Yours

Center a rack in the oven and preheat the oven to 350 degrees F. Butter two 9 x 2 inch round cake pans and line the bottom of each pan with a round of buttered parchment or wax paper. Put the pans on a baking sheet.

Cake: Sift together the flour, baking powder and salt. Whisk together the milk and egg whites in a medium bowl. Put the sugar and lemon zest in a mixer bowl or another large bowl and rub them together with your fingers until the sugar is moist and fragrant. Add the butter and working with the paddle or whisk attachment, or with a hand mixer, beat at medium speed for a full 3 minutes, until the butter and sugar are very light. Beat in the extract, then add one third of the flour mixture, still beating on medium speed. Beat in half of the milk-egg mixture, then beat in half of the remaining dry ingredients until incorporated. Add the rest of the milk and eggs beating until the batter is homogeneous, then add the last of the dry ingredients. Finally, give the batter a good 2- minute beating to ensure that it is thoroughly mixed and well aerated. Divide the batter between the two pans and smooth the tops with a rubber spatula. Bake for 30-35 minutes, or until the cakes are well risen and springy to the touch – a thin knife inserted into the centers should come out clean. Transfer the cakes to cooling racks and cool for about 5 minutes, then run a knife around the sides of the cakes, unfold them and peel off the paper liners. Invert and cool to room temperature, right side up (the cooled cake layers can be wrapped airtight and stored at room temperature overnight or frozen for up to two months).

Buttercream: Put the sugar and egg whites in a mixer bowl or another large heatproof bowl, fit the bowl over a plan of simmering water and whisk constantly, keeping the mixture over the heat, until it feels hot to the touch, about 3 minutes. The sugar should be dissolved, and the mixture will look like shiny marshmallow cream. Remove the bowl from the heat. Working with the whisk attachment or with a hand mixer, beat the meringue on medium speed until it is cool, about 5 minutes. Switch to the paddle attachment if you have one, and add the butter a stick at a time, beating until smooth. Once all the butter is in, beat in the buttercream on medium-high speed until it is thick and very smooth, 6-10 minutes. During this time the buttercream may curdle or separate – just keep beating and it will come together again. On medium speed, gradually beat in the lemon juice, waiting until each addition is absorbed before adding more, and then the vanilla. You should have a shiny smooth, velvety, pristine white buttercream. Press a piece of plastic against the surface of the buttercream and set aside briefly.

Assemble: Using a sharp serrated knife and a gentle sawing motion, slice each layer horizontally in half. Put one layer cut side up on a cardboard cake round or a cake plate protected by strips of wax or parchment paper. Spread it with one third of the preserves. Cover the jam evenly with about one quarter of the buttercream. Top with another layer, spread with preserves and buttercream and then do the same with a third layer (you’ll have used all the jam and have buttercream leftover). Place the last layer cut side down on top of the cake and use the remaining buttercream to frost the sides and top. Press the coconut into the frosting, patting it gently all over the sides and top.

Storing: The cake is best the day it is made, but you can refrigerate it, well covered, for up to two days. Bring it to room temperature before serving. If you want to freeze the cake, slide it into the freezer to set, then wrap it really well – it will keep for up to 2 months in the freezer; defrost it, still wrapped overnight in the refrigerator.