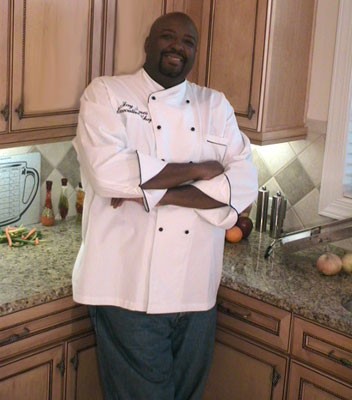 As a chef, caterer, and former DJ, it is safe to say that Chef Jay Jones comfortably wears many hats. At Chateau Noir, a full-service catering and event planning company, Chef Jones serves as the executive chef. His philosophy is simple: By making all his ingredients from scratch, he’s able to provide you with a culinary experience that’s not only enriching, but also satisfying to your palate.

Creative Loafing: I saw that you have an online cooking show, "Culinary Creations." Is that something you want to take mainstream?

Chef Jay Jones: Yes, eventually at some point in time. I can’t say I’m necessarily like, “Oh, I’ve got to get on the Food Network,” but I try to make it educational for people. I try to make it entertaining, but I want to teach people also, that’s important. Because, a lot of people just refer to cooks, or cookbooks, or a recipe, I want you to be able to come to me for information on something.

If you had a Food Network show, what would it be called and what would be your niche?

Because a lot of people are afraid of restaurant cuisine, like they think they can’t do it at home, I think it would be, "Restaurant Cuisine at Home," where it’s those dishes you get at the restaurant, and people say, “I had this really good, chicken stuffed with this and that, but I have no idea how to make it.” So it’s taking those recipes that people get, and showing them how to make variations of restaurant-style food at home, along with the educational part of it.

Wow, I would say that pretty much … see I love music, I love to DJ, I’ve been DJing since I was 9. And from my DJing, I kind of went into food, because we would do parties and we would try to figure out how we could get people to stay longer. And we were like, “If we gave them free food in the beginning, they will come earlier, drink more, stay longer, and it’ll be better.” So I started making food, and after the first person said, “Oh that’s really good,” then you’re like, “Really, you like that, huh?” And then you make more. Then, it came to the point where I couldn’t DJ and make the food, so I got people to work with me that could pick up the DJ end. And I just devoted myself to the food part of it. So, from the perspective of where I am now, I would say food.