I was talking to a guy yesterday who doesn't read my weekly comic book review column or this blog on a regular basis and he (let's call him DUSTIN) remarked that I don't really write negative reviews about the comics I read. And, although I do slam books regularly, his words got me to thinking that maybe I don't write enough about the comics I actually don't like. That said, here's a list of comics I currently detest: 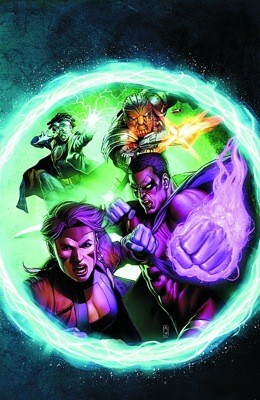 Milestone Forever No. 1: I liked a few of the titles published by this multicultural imprint of DC back in the day, but I was never a rabid fan. This book (pictured left) marks the return of the company's characters, and it's just awful. Elementary art from Mark Bright and an incredibly corny story line that works or fails based on your affection for the Milestone pantheon of heroes and villains. I have no affection for the folks, so the nostalgia doesn't move me.

Justice Society of America and/or JSA All-Stars: The JSA worked well under the talented pen of Geoff Johns — but he's gone and now the current creative teams just seem content to revel in lameness. Stale villains, bland action sequences, terrible dialogue and characterization that's just wrong. I love the team and even I can't read this shit anymore.

Booster Gold: Time travel comics suck. Why? Because nothing of consequence can actually happen due to the fact that you can't change the past. Just bring Booster to the present, and make him a money-grubbing hero again.

The Hulk: Who is Red Hulk? Who gives a shit?! Jeph Loeb and Marvel have been stretching this story out for so long, whoever ends up being revealed as the man behind the red bad guy — even if it's Jean Grey or something — won't be worth the wait.

Deadpool: I can't believe people read this. It's the most inconsequential book on the stands — yet, it sells. Amazing.

Uncanny X-Men: Yeah, I've given up on this title. It's just dull. How dull? Well one of the big sub-plots for the last few issues has been: How can the X-Men keep their island from sinking? The solution? Namor ended up building a pillar under it. Now, I'm no engineering genius, but how was this a big deal? The X-Men figure out ways to jump from one side of the universe and back every other month; they can't figure out how to build a pillar?!