Zero Dark Thirty an assault on the senses 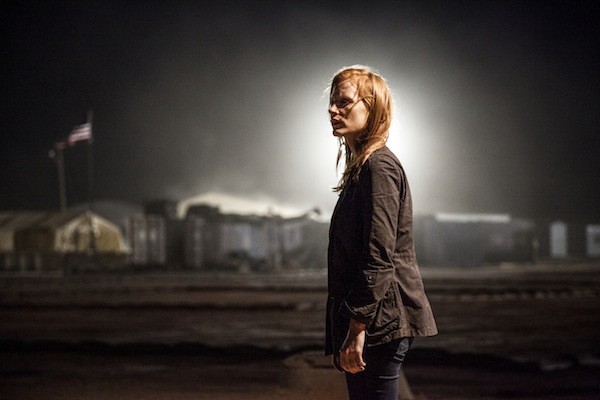 Kathryn Bigelow's Zero Dark Thirty is bold, provocative and challenging in ways not even attempted by other current award contenders like Lincoln and my 2012 fave Argo. The film recalls what President Woodrow Wilson reportedly said after screening D.W. Griffith's The Birth of a Nation: "It's like history written with lightning." Like that silent classic, this galvanizing picture is a work that's steeped in controversy, yet unlike that hearty shout-out to the glories of the Ku Klux Klan, the uproar here isn't nearly as clear-cut as it was when confronted with Griffith's racist ideologies.

Bigelow reteams with scripter Mark Boal — both won Oscars for 2008's The Hurt Locker — for a movie that relates in painstaking detail the CIA's decade-long search for terrorist leader Osama bin Laden. Delivering a sublime performance of ferocious intensity, Jessica Chastain headlines as Maya, an agency operative who makes it her personal mission to ferret out the murderous al-Qaeda head. Stumbling across helpful clues is, as another character notes, like trying to locate that proverbial needle in a haystack, but while other CIA figures come and go over the years for various reasons (Jason Clarke and Jennifer Ehle play the most prominent of these co-workers), Maya is determined to see the hunt through to the end, no matter how much resistance she meets from her superiors in this patriarchal agency.

Zero Dark Thirty is such a potent work — a methodical mystery, a political potboiler and a rueful American drama all rolled into one — that it's unfortunate it's become embroiled in a scandal which, frankly, it doesn't deserve. Erroneously denounced as taking a pro-torture stance by politicians trying to cover their own asses as well as by well-meaning but misunderstanding activists, the film actually does nothing of the sort. It instead acknowledges the very real presence of torture on the post-9/11 landscape — had the filmmakers ignored the subject, the movie would be little more than vile, jingoistic nonsense, made to appease rabid Tea Partiers and naive liberals alike. But in a break from traditional Tinseltown thinking, Bigelow and Boal insist on treating viewers like intelligent, discerning adults, able to absorb complexities and weigh knotty material. It's a gamble on their part, but without it, we wouldn't have a movie as important — and gratifying — as this one.