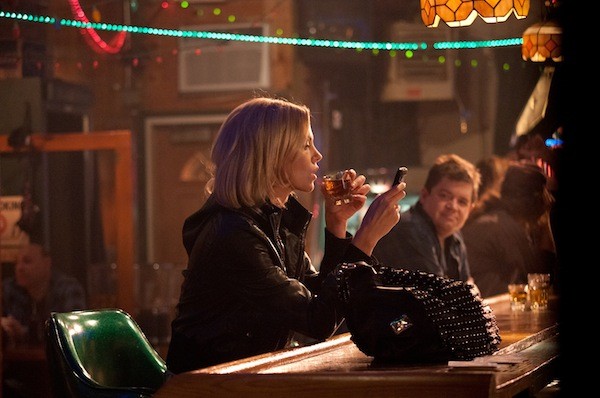 In an effort to prove she was more than just a pretty face, Charlize Theron was horribly made up for Monster and dowdily dressed down for North Country, consequently winning an Academy Award for the former and a nomination for the latter. In Young Adult, Theron has no need for such transformations: She looks weathered but beautiful, and it's easy to believe that her character, Mavis Gary, was one of the most popular girls at her high school back in the day. Make no mistake: Mavis is ugly, but that unattractiveness emanates solely from the inside. And Theron, ever the trouper, is only too happy to bring it to the surface in this wicked, biting seriocomedy.

The Juno team of writer Diablo Cody and director Jason Reitman have reunited for another movie about an idiosyncratic individual, but Mavis Gary is the polar opposite of the sensible and intelligent character played by Ellen Page in that 2007 gem. An unkempt, hard-drinking ghostwriter for a popular "young adult" franchise now on its last legs, Mavis leaves her Minneapolis stomping ground and returns to the dinky Minnesota hometown she detests, with the sole purpose of landing the one that got away. That would be her high school boyfriend Buddy Slade (Patrick Wilson), and what Mavis ignores in her quixotic quest is that Buddy is happily married to the sweet Beth (Elizabeth Reaser) and they've just welcomed a baby into the world. Dismissive of the wife and kid ("I've got baggage, too!"), Mavis continues her pursuit, despite the advice of former classmate Matt Freehauf (Patton Oswalt) to cease and desist.

Theron is excellent in the central role: Never once does she angle for audience sympathy, and she matures even less as a person than Cameron Diaz's boozy instructor in Bad Teacher. Yet the real ace here might be Oswalt, who's terrific as a guy who's endured genuine hardships in his life. Savagely beaten as a teenager by jocks who believed him to be gay (he isn't), the physically damaged Matt becomes Mavis' unlikely pal and sounding board. Like Mavis, he's also trapped in the past and needs to grow up, but his good heart and sensible brain suggest that, of the pair, he's the one who stands a better chance of belatedly snagging the senior superlative, Most Likely To Succeed.