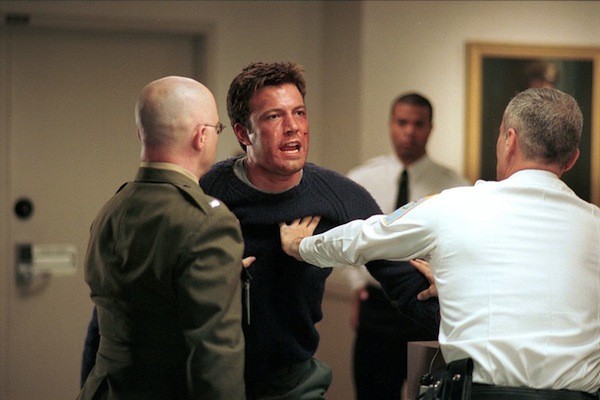 If the James Bond film series evokes the spirit of Oscar Wilde's The Picture of Dorian Gray -- after 40 years, the secret agent with a license to kill hasn't aged one iota -- then the Jack Ryan franchise would suddenly seem to have established some sort of link with H.G. Wells' The Time Machine. The CIA analyst created by best-selling author Tom Clancy was played by a 31-year-old Alec Baldwin in The Hunt for Red October and a 49-year-old and 52-year-old Harrison Ford in, respectively, Patriot Games and Clear and Present Danger. Yet now we have The Sum of All Fears (*** out of four), which is set in the present day yet finds Ryan being portrayed by 29-year-old Ben Affleck. What gives?

Actually, nothing more sinister than an attempt by Paramount Pictures to resuscitate a series that, while hardly on life support (all three previous entries were huge box office hits), nevertheless had trouble getting up off the couch. It's been eight years since Clear and Present Danger (part of the delay was due to Ford's hemming and hawing on whether to reprise the role), but this late-blooming entry shows that none of the luster has worn off the series; in fact, the Jack Ryan line has proven to be immensely more enjoyable than the recent 007 adventures with Pierce Brosnan.

Rather than the authoritative, take-no-prisoners man of action portrayed by Ford, Affleck's Jack Ryan, as befits his age, is a more tentative hero who knows his place in the CIA chain of command yet isn't afraid to voice his opinion in matters that fall into his area of expertise. In The Sum of All Fears, the Jack Ryan we meet is still a CIA greenhorn, having joined the bureau not too long ago as an analyst. One of his strengths is his intimate knowledge of Russian president Nemerov (Ciaran Hinds), which comes in handy once US Intelligence gets wind that something might be stirring in the former Big Red nation. A nuclear weapon -- as well as three Russian scientists -- has gone missing, and tensions begin to mount at such a rapid clip between the former Soviet Union and the US, it soon appears that World War III is an inevitability.

CIA Director William Cabot (Morgan Freeman) thinks that Ryan's knowledge might be of use, a view not particularly shared by the US President (James Cromwell) or any of the members of his staff. Nevertheless, Ryan's hunch proves correct: The Soviets are blameless, since the real threat turns out to be a shadow organization of neo-Nazis (in this day and age, about the only group that Hollywood can present as villains without having protests organized across the nation). But convincing his superiors without hard proof is another matter, and Ryan frantically embarks on a global jaunt to gather evidence before both nations' bombs start bursting in air.

Arriving a week after Insomnia, The Sum of All Fears offers more proof that reports of the death of the well-structured screenplay may have been greatly exaggerated. As scripted by Paul Attanasio (Quiz Show) and Daniel Pyne (Any Given Sunday), this is an intelligent thriller that patiently lays out the necessary expository groundwork in the first half so that matters can come to an exciting head in the second part. The Cold War may be over (the Lukewarm War is the best we can hope for these days), but Sum harkens back to the 60s era of classic espionage dramas that invariably starred the British likes of Michael Caine or Richard Burton.

If this film seems a little more tightly wound than its screen antecedents (admittedly, it could also use a little more grit and a little less slick), that's probably because, reflecting today's technologically dependent world, it features covert operations of an era in which quicker means of communication hasten the pace of secrets exposed and master schemes altered. Director Phil Alden Robinson (Field of Dreams) tackles the escalating events as if his own coffee buzz was building, and his staging of a major disaster that wipes out scores of Americans, while especially uncomfortable to witness in this post-9/11 age, never feels sensationalistic; on the contrary, it serves not only as a reminder of the perpetual threat of terrorism that hangs like the Sword of Damocles over our nation but, more reassuringly, also shows the efforts of Americans to step up to the plate in the aftermath of a tragedy to offer support and aid.

Affleck's youthful vigor suits his rookie character, and the Jedi Master-Padawan Apprentice rapport he shares with the commanding Freeman is one of the film's most enjoyable aspects. Liv Schreiber, that rare lucky actor who's often cast in colorful roles that indicate Hollywood doesn't always resort to typecasting (his Laertes was one of the unexpected bright spots in the disastrous Ethan Hawke version of Hamlet), makes a strong impression as an American agent who ruthlessly kills for God and country (Willem Dafoe handled the same part in Clear and Present Danger), while old reliables like Philip Baker Hall and Bruce McGill are aptly cast as some of the president's men.

As for that age-discrepancy matter between the old, older Jack Ryan and the new, younger Jack Ryan -- well, no matter, really. It may be a sad fact of life that Tinsel Town likes to discard its old to make room for fresh faces, but in this case, the transfusion of Affleck's young blood might be enough to keep this series pumping along for another few years -- or at least until Haley Joel Osment reaches voting age and can take over the part.