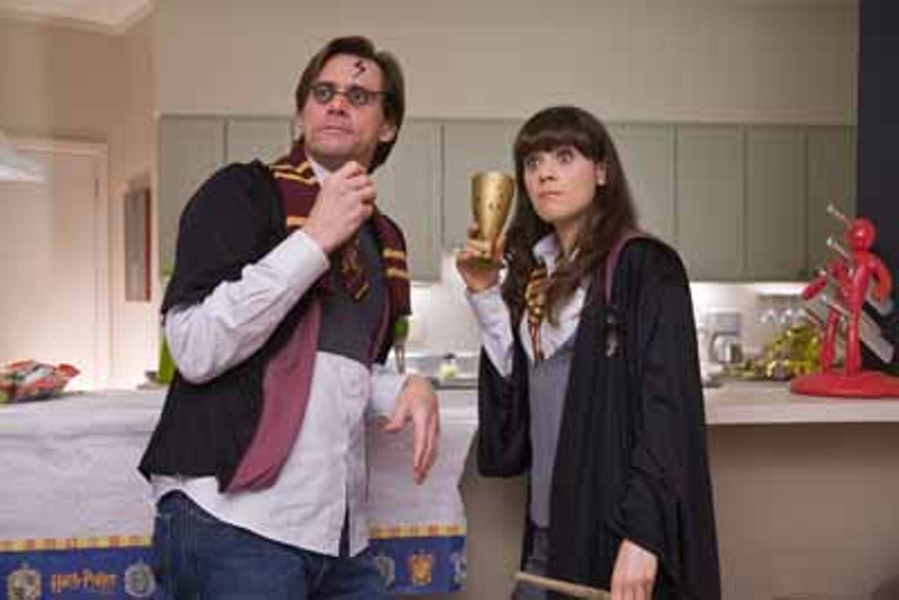 WHEN HARRY MET CARREY: With Allison (Zooey Deschanel) at his side, Carl (Jim Carrey) attends a Harry Potter-themed party in Yes Man.

No one can really blame Jim Carrey for returning to the same spastic well time after time. When the actor attempts to stretch, as in the woefully underrated Man on the Moon or the time-wasting The Number 23, audiences usually stay away in droves. So, yes, Yes Man finds the elastic comic working a variation on his patented routine from such hits as Bruce Almighty and Liar, Liar. The difference here is that there's a winning romance to go along with his hyperactivity -- for once, he's as sweet as he is sweaty.

Much of the credit goes to co-star Zooey Deschanel, who matches up better with the comedian than either Bruce Almighty's Jennifer Aniston or Me, Myself & Irene's Renee Zellweger, to name but two past movie g.f.s expected to stand aside as he cut loose. Deschanel, often cast as a charming flake, mines similar ground here, and her off-kilter personality allows Carrey to maintain his goofy brand of humor while also displaying a softer side. It results in a likable turn as Carl Allen, a perpetually gloomy introvert whose entire life changes after he's convinced by a self-help guru (Terence Stamp) that he must say "yes" to every situation that comes his way or risk a spell of bad luck. Thus, Carl ends up saying "yes" to a homeless man (Brent Briscoe) needing a ride, a nerdy boss (New Zealand actor Rhys Darby, very funny) who invites him to a Harry Potter costume party, an elderly neighbor (Fionnula Flanagan) who offers to "service" him, and so on. Into this mix comes Allison (Deschanel), a free spirit who responds to Carl's newfound sense of adventure.

As is often the case with Carrey, his shtick can be appealing in some scenes and simply tiring in others, and the film itself runs too long for its own good. But the sequences between Carrey and Deschanel provide the picture with a needed boost. Is Yes Man worth seeing? Yes ... but feel free to wait for the DVD.