X-Men: Days of Future Past: The Future is wow | Reviews | Creative Loafing Charlotte

X-Men: Days of Future Past: The Future is wow

Far be it for me to commit the cardinal sin of dropping any spoilers — particularly in the first act of a review — so let's just say that X-Men: Days of Future Past lets slip a couple of bombshells involving John F. Kennedy and his assassination, material that is conspicuously missing from our nation's textbooks. It also demonstrates conclusively that there were moments when Richard M. Nixon opted not to allow everything to be recorded on his infamous Oval Office tapes. Personally, I can't wait to see what future franchise installments hold in store for our nation's leaders, though rumors abound that we'll see Bill Clinton unwisely hit on new White House intern Kitty Pryde and learn that Ronald Reagan was the real power behind the Brotherhood of Evil Mutants.

For now, we can bask in the company of this latest X-adventure, which, like 2011's excellent X-Men: First Class, manages to smartly incorporate historical events into its rollicking tale of mutant mayhem. With the goodwill generated by director Bryan Singer's X-Men and X2 run into the ground thanks to the messy inclinations of X-Men: The Last Stand (thanks a lot, Brett Ratner), not to mention Wolverine largely striking out with his own solo saga, it took Matthew Vaughn's X-Men: First Class to return the Marvel property back to its lofty status. Vaughn elected to pass on this latest picture, a potential quality-killer averted when Singer himself decided to return to the director's seat. The presence of Singer is appropriate, since the film itself expertly bridges the gap between his earlier works and Vaughn's reboot.

Based on a storyline introduced in the January 1981 issue of The Uncanny X-Men (as a childhood comic-book reader who subscribed to this title, I own that issue and will seriously consider any six-figure offers for it; OK, make it five figures and we have a deal!), the story begins in the near future, when powerful beings known as Sentinels have been tasked by those in charge to exterminate all mutants as well as round up any humans who dare to help them. Among the few mutants still alive are Kitty Pryde (Ellen Page), who has the ability to send a person (or, rather, their consciousness) back into the past; Professor X (Patrick Stewart) and Magneto (Ian McKellen), who decide that someone needs to travel back to 1973; and Wolverine (Hugh Jackman), who volunteers for the job when it becomes clear he's the only one who could survive such a decades-spanning jaunt. Why 1973? Because that's the year that Mystique (Jennifer Lawrence) murders Bolivar Trask (Peter Dinklage), the scientist who creates the Sentinels in the first place and whose death-by-mutant galvanizes the nation's leaders into seeing his project come to fruition. To stop Mystique from carrying out her hit, Wolverine will need assistance from that era's Professor X and Magneto, a tall order since the professor (James McAvoy) has dulled his abilities with painkillers and Magneto (Michael Fassbender) is being held in a maximum-security facility. 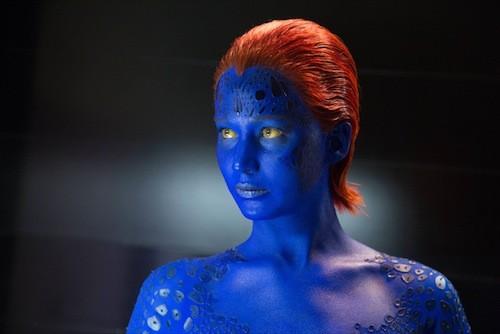 The 1986 hit Star Trek IV: The Voyage Home found Kirk and company traveling back in time from the far future to the mid-80s, thus allowing much culture-clash hilarity to ensue (case in point: Spock performing the Vulcan nerve pinch on a Mohawked punk playing his boombox too loud). In Days of Future Past, there's little time for Wolverine to stop and smell the zeitgeist: He's a man on a mission, and the film hurdles ahead with purpose and urgency, a decision that allows a plot that could have gotten bogged down in dry exposition to move forward with clarity at a fast and furious clip.

That's not to say the movie is bereft of humor. Jackman's Wolverine is always up for providing a curt quip, although most of the laughs derive from the new-to-the-series character of Quicksilver, a cocky teen with the ability to move at such super-speed that the rest of the world seems to be frozen in time (as evidenced in one superb sequence scored to Jim Croce's "Time in a Bottle"). As this brash youth, Evan Peters (TV's American Horror Story) is so enjoyable to watch that it's a downright tragedy the dull Aaron Taylor-Johnson (Godzilla, Kick-Ass) will be essaying the role in next summer's Avengers: Age of Ultron.

As is the norm for superhero flicks, X-M:DoFP contains plenty of snacks for the diehard fans. There are some surprise cameos from past series regulars. There are knowing references to previous pictures in the franchise. There's even a tantalizing tease to further whet appetites (less savvy viewers will be forgiven for thinking they're watching an outtake of Jaye Davidson in Stargate). But more universal themes are also addressed, specifically the perpetual series standby of the evils inherent in a world that believes in prejudice and segregation. And in addition to the presidential perspectives, the movie also manages to incorporate the Vietnam War, Roberta Flack ... and Sanford and Son. It's that kind of movie: knowledgeable, emotional, and packed with incident and excitement.