The house that beer built 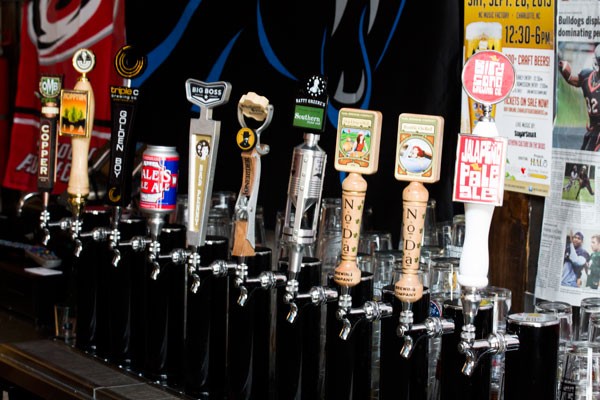 I had my first experience with local beer in college at the University of Georgia in Athens. Terrapin was the largest local craft brewery, and I drank plenty of its beer. My main watering hole, though, was a brewpub on Washington Street called Copper Creek. These guys brewed small batches (probably five barrels at a time) and always had four house beers on draft that ranged from light in color and body to dark and heavy. I first encountered so many styles there, including pumpkin ales, oatmeal stouts, märzens and steam ales.

Every time I went to that bar, I spoke with someone who made and/or loved beer. These guys were knowledgeable, passionate and driven. They loved to talk, and I was more than eager to share in their lessons and stories (which probably explained my less-than-trim physique at the time).

In 2007 I returned to Charlotte to find a city with no local distributing breweries. Hops and Rock Bottom, local brewpubs, were open at the time, but were nowhere near my home, so it wasn't until 2009 when OMB opened its doors that I was able to get consistently fresh local beer in the Queen City.

Once upon a time, all beer was locally made. In 1900, there were more than 1,700 mostly local craft breweries in this country, until Prohibition wiped out the industry. Post-Prohibition, fewer breweries meant less competition, and by 1979, there were only about 80 breweries left. Through consolidation, the Buds, Millers and Coorses of the world were able to build incredibly successful businesses that control the beer industry in the United States today. Because of the limited number of domestic beers to choose from and the far-reaching marketing programs of these large brewers, people developed strong brand loyalties and began to identify themselves as "Bud guys" or "Miller guys" — and such strong loyalties ultimately kept people from trying new products.

The local and craft scene is now thriving. In cities like Denver and Asheville, craft beer has boosted tourism and the local economies tremendously. Here in Charlotte, we have a passionate, competent craft beer community too, and it is only getting better. Today, the Charlotte area is home to six fully functioning breweries: OMB, NoDa Brewing Company, Four Friends, Triple C, Birdsong and Ass Clown in Cornelius; two brewpubs (Rock Bottom and Heist); and several others in the works (Free Range and Unknown among others).

Local beer is about quality, variety and choice. It's also about building and supporting the community you live in. Since they started popping up in Charlotte, independently owned breweries have positively impacted the city's economy. Breweries here have created more than 75 local jobs in the last four years, and arguably hundreds more if you consider the business they generate for other vendors that provide those breweries with goods and services. In addition, the employees of these breweries live locally and spend their money in the community. This virtuous cycle keeps money recycling in the local economy, creating growth and ultimately wealth — not only for local businesses and vendors, but for the community as a whole.

Our local breweries are also huge community supporters themselves. Both NoDa Brewing and Triple C host weekly run clubs on Wednesday and Thursday respectively, and OMB has a Sunday bike-up sponsored by Team Reeb, a local cycling group that participates in charity rides to raise money for cancer research. Breweries have donated beer and gift baskets to events that support everything from the Humane Society to Levine's Children's Hospital. The yearly Brewer's Ball, organized by local breweries, raises money for the Cystic Fibrosis Foundation; this year's event, which was held Sept. 7, brought in more than $50,000.

These days, I often hear craft beer referred to as "cool" or "the next big thing." While I appreciate this buzz, such language also scares the hell out of me. It subtly suggests that craft beer, or in Charlotte's case, local beer is simply a fad that will blow up and then fade into obscurity, like the Angry Birds of the beverage world. For now at least, that does not seem to be the case, but another challenge looms larger.

With a certain level of success comes great scrutiny, and the large regional and national breweries that have distributed in the Queen City with very little competition up until this point are taking notice. As craft breweries continue to grow in both size and number, they are taking market share held mostly by the world's three big beer companies: Anheuser Busch-InBev from Belgium (Budweiser, Stella, Becks, etc.), MillerCoors from England/Canada (Miller, Coors, Blue Moon, etc.) and Heineken from Holland (Heineken, Newcastle, Amstel, Dos Equis and more). These brewers have hundreds of brands each and operate globally.

In 2012, all five Charlotte breweries produced approximately 11,000 barrels of beer, or roughly 2.7 million pints. Seems like a lot, right? In reality, that volume is still less than 1 percent of the total Charlotte beer market, which exceeds 1.2 million barrels annually.

But in response to the growing demand for craft beers, large companies are creating craft-like (some refer to them as "crafty") brands like Shocktop and Blue Moon, as well as purchasing well-known local craft brands like Goose Island out of Chicago and taking them national. They know Americans are developing more diverse palates and are investing in this "trend," which is making the craft market that much more competitive. Unlike most local breweries that often have little to no marketing budget, these multi-billion dollar companies have a lot of money to spend on marketing and can get their message to a lot of people (think Super Bowl ads like those majestic Budweiser Clydesdales or that ice cold Coors Light train that comes out of nowhere to cool off poor, sweltering, insanely attractive coeds). That makes word of mouth and interactive grassroots marketing such as social media critical for local breweries' success.

The one advantage local brands will always have over national or even regional brands is freshness. The cliché is that beer is "liquid bread," and for the purpose of freshness, it actually is an apt analogy. Bread is at its best as soon as it comes out of the oven. Beer is at its best as soon as it comes off the yeast in our tanks (these are beer's "ovens"). There is simply no way that breweries producing beer on a national or international scale can provide customers with fresher beer than a local brewer, based on proximity alone. At OMB, we get beer to our customers within days (and often hours) from when it comes off of the yeast in our lager tanks. Other Charlotte breweries do the same. There are things you can do to extend a beer's shelf life, such as use chemical preservatives or pasteurization (a heating process), but they can significantly affect the flavor. Small breweries that distribute fresh beer locally do not require those "preservative" steps to maintain the integrity of their product.

We are about to hit prime beer festival season in Charlotte, which is a great time to start supporting area breweries. Go talk to local reps at Charlotte Oktoberfest (Sept. 28), Mecktoberfest (Oct. 5), Brewz Music and Art Festival (Oct. 19), Salud's Sour Fest (Oct. 26) or any number of other great local festivals and sample the beers. When you find something you like, visit the breweries and get to know their staff. You'll learn more about a product that you like and get to experience the passion of the people who make it. If your experience is anywhere near as positive as mine, you can start to seek out bars that carry those beers, or more importantly, request that your local bars start selling your favorite local beer. That is the best market research these independent business owners could ask for.

Whenever I go back to Athens, I always spend at least one evening at the bar at Copper Creek talking shop with many of the same employees who worked there when I was an undergrad. Aside from tailgating for football games with my former roommates, it is my favorite part of the visits. With any luck, 10 years from now, there will be a whole new group of college kids sitting in Charlotte bars, listening to our stories and sharing our passion.

Cam Heiliger is a freelance writer, homebrewer, educator and overall craft beer geek. He works in marketing and distribution at Olde Mecklenburg Brewery, where he runs social media, gives tours of the brewery and ensures that Charlotte has the cleanest OMB beer lines around.