We played with prophylactics for Condom Couture and we liked it

Sara Workman This gown, currently on display at Boris & Natasha, was showcased at Asheville’s 2014 Condom Couture.

I'm leaving to go pick up condoms," I announced to my staff proudly one Friday afternoon, slipping on my coat. "Things you don't hear at the daily paper," I quickly added with a grin. Jeff, our music editor, glanced my way and then turned back to his computer, shaking his head slightly. He's used to my randomness.

"Yes!" Melissa, our creative director, cheered. She gets excited about projects.

I was headed to Planned Parenthood on Albemarle Road to meet Marcie Shealy, director of philanthropy. I'd emailed her earlier in the week to ask for a handful of condoms. I asked for six pink and 12 black. We're going to attempt to make an accessory, maybe a boutonniere, I wrote.

Shealy responded, saying she'd give me more. "You will need them," she wrote back.

And more she gave me. A whole tote bag full, in fact, of a rainbow of colors I didn't even know existed in birth control — pink, purple, orange, black, yellow, etc. She even showed me some designer condoms.

As I carried the bag back to my car, I made sure none of the strips of condoms were peeking out. I knew I had no reason to be ashamed — if a stranger saw just how many foil packets were in there, they'd at least know I was being safe. But I grew up in a religious household, where my parents never — ever — had "the talk" with me. Sex stuff turns me into an awkward penguin, as I'm sure is the case for a lot of folks who grew up in the Bible Belt.

That's why the upcoming fashion event Condom Couture is such a cool idea. Seventeen of Charlotte's A-list designers and artists will showcase their individual works, utilizing at least 1,000 condoms, in the name of fashion and promoting safe sex. The Feb. 21 event benefits Planned Parenthood South Atlantic, an organization dedicated to helping women and men get educated on reproductive care, sex and family planning.

It's not the first time customized condom dresses have made their way down a runway in North Carolina. Asheville has hosted an annual Condom Couture for three years now. It's finally Charlotte's turn.

For event chairperson Lesa Kastanas, a big advocate for AIDS awareness, it was never a question of whether the Queen City was ready for this type of event. Rather, she worried about how to make Condom Couture stand out from other fashion or recycled art events. "I felt like, right away, if I didn't get Scott Weaver and Sharon Dowell involved in this, then it wouldn't be a success."

Weaver, a local artist/musician who's always got his hands in something cool, is handling party details at the Chop Shop while Dowell, a champion for public art and UNC Charlotte gallery coordinator, among other things creative, curated the designers. The list ranges from Art Institute of Charlotte students to the muralist responsible for the work done on the side of The White Rabbit, to a wedding gown designer.

To get an idea of what these designers were having to deal with as they worked on their dresses, my creative director and I spent an afternoon playing with condoms. As you can see from the photos, we did not make a boutonniere. Go big or go home, right?

THE MODEL'S NAME is FiFi. Actually, I have no idea what her name is. When we pulled a short black wig over her bald head, the mannequin oddly looked French to me. An eyelash-less French model with high cheekbones.

FiFi is one of the mannequins that greet visitors in our office lobby, and what we deemed a perfect dress form for our condom dress project.

While most fashion designers take their time to brainstorm, pattern and cut, our first concern was simple and to the point — where do we even start? I can't even remember the last time I sewed a button back onto a shirt.

Before tackling our project, I talked to Patrick Tai, an up-and-coming fashion designer who currently attends the Art Institute and will have a gown in the show. I told him we had no clue how to begin.

"This is new to me, too," he confided. "The glue that I'm using doesn't stick the way I want it to, so I started going back and then hand-stitching it to give it that kind of reinforcement. I don't want the model that I'm using to be walking and condoms falling off of the piece. That wouldn't be a good look at all."

Luckily, we didn't have the added stress of having to put our dress into motion.

Tai offered me a final piece of advice: "You can't really think about it and be too literal about it. You just have to go and just do it. It will come together."

We unrolled condoms, stretched them out, rolled them back up. We flicked them at one another like slingshots. We tied knots. We untied knots.

Finally, we figured out a direction. Start with some glue, aim for an empire waist, incorporate newspaper (because, duh, we've got plenty of it) and then see what happens.

ANOTHER CONDOM COUTURE designer, silversmith Day Hixson, says she started the same way we did. "I really didn't know what to do." But in her own work, she's recently been fixated with a hammered teardrop shape, which has made its way into her condom creations.

When I visited her backyard studio to see the progress she'd made so far, Hixson was finalizing various pieces including cuffs, rings, crowns and more. She said she really wanted to challenge the viewer's perception of what the material is.

As Hixson and I discuss the symbolism behind some of the materials, words like "unsheathed," "explosive" and "movement" make their way into our conversation. She talks about the threads she's incorporating into some of the pieces, a possible symbol of "other things we don't need to talk about." It's hard not to giggle a little. Isn't there a 13-year-old boy inside us all?

I think the folks at Planned Parenthood South Atlantic understand how the topic of sex can be awkward. In a press release, the organization, which helps 25,000 people in North Carolina annually, states the event "is intended to spark a dialogue about sexual health and safer sex in the context of a laid-back, fun, party environment."

And maybe seeing a form of birth control take the spotlight will help folks feel a little less embarrassed about it.

That doesn't mean there isn't a profound message underneath it all. Kastanas, the event chairperson, says young people just aren't as hyper-aware of the scary stuff as she was when she was in college in the '80s. That's why Condom Couture is a 16-and-up event. "I had a close friend that I lost as a result of complications related to AIDS about 10 years ago. But I have a lot of friends who are affected by it. We lost people regularly.

"[Young people] don't have the kind of fear that we had, because you aren't seeing people dying from it. Today, you're seeing people living with it. It's a big difference. [Back then] if you didn't use a condom, it was like, holy cow I could die. That's how it was, and it's not like that anymore."

A COUPLE HOURS after switching the color scheme to coordinate better with the newspaper, fighting with strings of glue and shredding newspaper, we were done. (Side note: After gluing about 60 black condoms to the fabric we'd fashioned for the torso, my fingers were both dry and sticky. The condoms were non-lubricated — can you imagine what a mess this would have been otherwise?) Sure, I had accidentally stuck a few of the black condoms on the wrong way — the tip of the condom was supposed to be facing inward, not out saluting the world like a nipple. And sure, maybe we did say to hell with it and glue orange condoms directly to FiFi's neck to serve as a choker. Accessories are a girl's best friend, right?

Planned Parenthood's Shealy was right. We definitely needed more condoms than the 18 I had originally requested. We used closer to 100 and didn't even cover half of the model.

I can't wait to see what people with actual skill will present at Condom Couture.

FiFi, who once donned jeans, a T-shirt and cap, now stands erect in the office, looking down on us cooly. It's amazing what a little high fashion will do to one's attitude, isn't it? 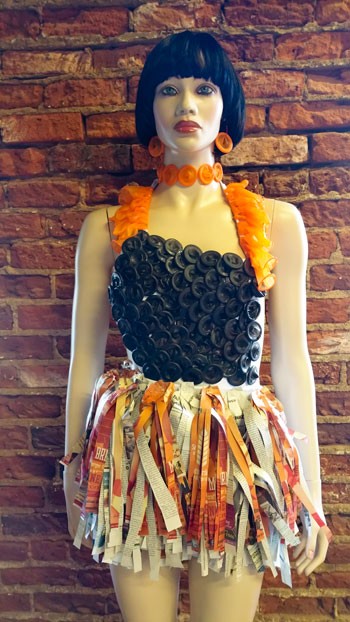