We heart you, Charlotte

I'd like to think that if Creative Loafing and Charlotte were tagged in a relationship on Facebook, it'd be listed as, "It's complicated."

With 26 years under our belt, we're certainly not dumbstruck with love for this city. We aren't afraid to tell it like it is. When the announcement was made that MetLife would move its headquarters to Charlotte, we pointed out that the actual number of local jobs would be less than half than suggested. When local government backed a plan to build a Charlotte Knights stadium in Uptown after voters expressed they wanted a park in Third Ward instead, we criticized the move.

But we do love this city and all that it offers, from the greenways that curve with graceful athleticism to the restaurants that offer creative, mouth-watering treats.

It's this relationship that inspired the theme for our annual Best of Charlotte issue, where we honor all of the people, places and things that are the best, according to our panel of critics and the readers who participated in our ballot.

This year, you'll see a few changes from past editions. For one, we opted to update our critics' categories a bit. Rather than rack our brains to fill in some formulaic categories — which often awarded many of the same winners year in and year out — we tailored our picks to that which truly deserved recognition from the last 12 months. Of course, there are some past winners we couldn't ignore — the banh mi from Le's being a prime example. When music editor Jeff Hahne brought both of us back a sandwich for lunch one week, with the intention of taking a photo to accompany the write-up on our website, we forgot about the photo and inhaled the banh mi instead. "Did you remember to take a photo?" he asked me as I swept bread crumbs and swigs of cilantro off my desk. Uh, nope, and neither had he.

Another change you'll notice is the elimination of the Media section. In the last few years, participation on this portion of the reader ballot has steadily declined. Why that is, I'll never know. The media gets a lot of flack from trolls who think every published story or social media status is a calculated ploy to garner pageviews or scare people into thinking a certain kind of way, but great journalists keep government officials on their toes and hold the city accountable for its actions. They are an intrinsic part of city life, and it's for that reason we honor a few notables in local media in the, uh, City Life category.

As you flip through the following pages, reminisce about the scandalous relationship between Mrs. Robinson and Benjamin Braddock from The Graduate. Consider the attraction between Jack and Rose in Titanic, between Baby and Johnny in Dirty Dancing. Remember the obstacles Ilsa and Rick face in Casablanca, Frank and Rachel endure in The Bodyguard and the dogs overcome in Lady and the Tramp. And recapture that warm feeling from the happy ending of Pretty Woman.

We might not scribble love notes to you all the time, Charlotte, but we heart you. We really do.

As always, this issue wouldn't be possible without the combined efforts of various people: the critics, vote tabulators, sales people, designers, writers, photographers, editors and distributors.

Special thanks go to Improv Charlotte for modeling in this year's Best of Charlotte issue. Learn more about this talented group at www.improvcharlotte.com. 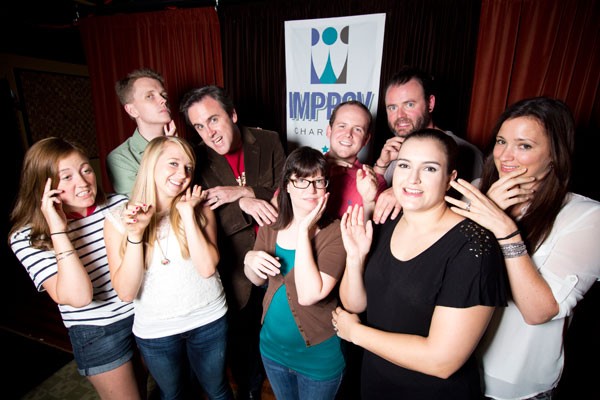