Was the first big snow all it was hyped up to be?

Creative Loafing took to the streets of Plaza Midwood, Noda, and spaces in between earlier this week to talk with Charlotteans about how they spent the year's first snow.

"It was pretty bad," said Carl Hall. He was hanging out with friends in below-freezing temperatures Monday afternoon next to This & That Home Mall at the corner of North Tryon Street and Dalton Avenue, trying to stay warm. Over the weekend, Hall waited out the storm at the nearby Men's Shelter of Charlotte.

Hall's cohort James Delford was laid up in the hospital during the storm, having a leg treated for a bite that became infected. He was glad to be there. Delford said that even in foul weather he avoids the shelter, where insect bites are the least of his worries.

"I've had some bad experiences at that shelter in the past when I first came to Charlotte," Delford said. "I don't deal with it. It's open war. When the weather gets bad, I got some friends I can stay with."

Two of the more dependable Noda/Plaza Midwood hotspots — Amelie's French Bakery in the Noda at 28th complex in Villa Heights, and Common Market on Commonwealth Avenue — remained open despite the slick roads and pouring snow Saturday morning. And customers flocked in, said Garrett Ballard, a manager at Amelie's. While other Amelie's locations closed, the one in Villa Heights kept the lights on and coffee flowing. 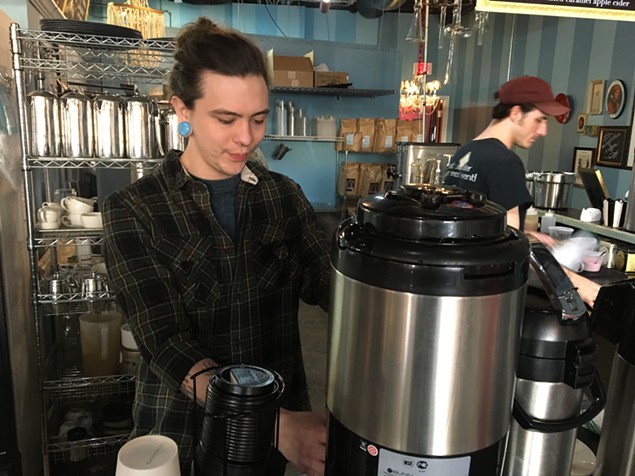 "The Noda location has always said it would be open for people 24/7, and we keep that promise," Ballard said. "Unless, of course, there's civil unrest and the government makes us close or something crazy like that. Otherwise, we're going to be open, no matter what.

"And we were slammed," Ballard added. "The phone rang off the hook all day: 'Are you guys opened? When are you gonna close?' We had a line all the way into the dining room all day."

The biggest worry for Davidson College student Lexi Wombwell, 19, was whether her boyfriend Josh Sawyer would be able to make it down from Durham. He did. 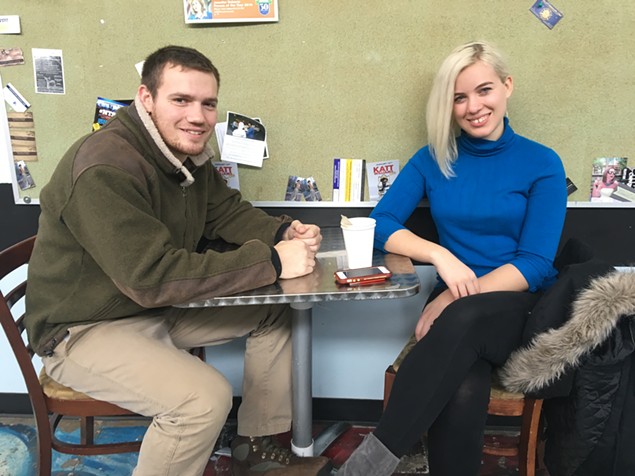 "I drove two hours through the snow," said Sawyer, 21, who sat with Wombwell over steaming coffee Monday in the atrium behind Amelie's. "It was pretty treacherous on the back streets, even with four-wheel drive. My Jeep was fishtailing. But I was determined. I was gonna come down to visit Lexi."

Did she expect him e? "No, I didn't expect him to come," Wombwell said with a laugh. "Not in a Jeep that fishtailed six times on the way here!"

When Tajanee Johnson heard school was canceled on Friday, she took it in stride. "I didn't have any plans," said the 12-year-old, sitting at a table in the atrium across from a friend, both deep into their school work. "I just worked all day."

And what is work for a Middle Schooler on a snow day?

"I expected to go to school, so I spent the day studying," Johnson said.

What, no snow cream? Are all preteens Einsteins these days?

You wouldn't have found Blair Bowman studying science on a snowy weekend. Bowman, who works at House of Pizza, knows snow, and she knows what to do in it. After all, Bowman is from the upper Midwest, where snow is real.

"My friend picked me up and we went to a baseball field and attached a sled to the back of his truck and he pulled me around," said Bowman, sitting with Dustin Cape on the front patio at Common Market.

The 32-degree temperature didn't seem to be bothering Bowman at all. "Although I will say that, being from Michigan, they don't do a very good job here of salting the sidewalks."

Go on. "I had to walk home from work on Saturday morning and I..." She busts out into laughter. "This is not a good story."

In short: Bowman busted her ass.

Sitting on a picnic table next to Bowman, a smirk on his face and angst in his soul, Cape suffered an existential crisis when he got up on Saturday after all the snow-warning hype the day before.

"I was disappointed," he said.