When my editor asked if I'd write a story about the artist who paints inside Walmarts, I asked, "Would I actually have to go to Walmart to write the story?"

I'm proud that I have only been to a Walmart on two occasions in my life. I loathe the retailer for all the reasons you'd imagine: questionable labor practices, putting mom and pop stores out of business, selling guns and ammo.

The artist, Atlanta-raised Brendan O'Connell, will be at the Walmart on Wilkinson Boulevard Aug. 6 and 7 to paint, uh, the banana. Apparently, it's his favorite fruit — he eats 10 to 30 'nanas a day.

Needless to say, he was not what I expected.

I assumed O'Connell was making fun of Walmart by painting scenes inside the big-box stores. He's not. Since the media dubbed him "Walmart's Warhol," I also presumed his art was a statement on consumerism or unfair labor practices, but he says the moniker doesn't exactly describe his work or his aims. He says TIME dubbed him "America's Brand Painter," and that comes closer to describing what he does. (O'Connell has also been featured on The Colbert Report and profiled in The New Yorker.)

No place has more stuff than Walmart. The proliferation of brands on display there intrigues O'Connell. "Twenty years ago, people didn't have a relationship to brands," he says. "Today we do."

"Someone commissioned me to paint Swedish fish," he says.

"You mean that gummy candy?" I ask.

"Yes," he says. "And this wasn't someone who worked for the company or whose grandfather founded the company. This was someone who just really loves and connects with this brand. I'm fascinated by that loyalty to a particular brand. So, this is a fun petri dish for me."

Before talking to O'Connell, I wondered if he might be a latter-day Thomas Kincade. You know, the Painter of Light™. (Yes, the megamillionaire artis who painted country cottages nestled in magical woodland dreamscapes and babbling brooks meandering through idyllic faerie lands, trademarked the title.)

O'Connell is more interesting and complicated than that, though.

The artist, who describes his style as closer to Edward Hopper than Andy Warhol, began painting what he says was "the lone shopper in a big box store." Had Walmart been around when Hopper (whose best-known work may be the melancholy Nighthawks) was alive, he may well have been intrigued by the place that attracts big crowds at all hours of the day and night, yet manages to still feel lonely.

"Walmart stores are the most visited interior architecture on earth," O'Connell says. Where better to observe the human condition?

So, I wondered: These paintings of rows upon rows of Jif peanut butter and long checkout lines really aren't saying something about our consumer culture?

O'Connell says it's all up to the viewer. "I had a professor at Emory who told me, 'If you're going to paint 6 feet of Cheetos, people are going to draw conclusions," O'Connell says. "The painting becomes a political statement.'"

O'Connell wants people to draw their own conclusions. And they do. "One person can look at one of my paintings [of consumer goods] and say, 'Aren't God and America great?' and another can look at the same painting and say, 'The world is coming to an end.' The same painting can elicit divergent reactions. If I came out strong on irony, I'd miss out on people's earnest reactions."

He means it. O'Connell sounds both intellectual and sensitive. He doesn't talk the way I thought "the Walmart painter" would. He's not ridiculing the Walmart people. He respects his audience — no matter why they're drawn to his work. He will admit, "I do find a certain sense of irony, though, when someone basically says, 'There's just not enough advertising in this world. I think I'd like my living room to be an advertisement.'"

When O'Connell first began setting up his easel and canvas inside Walmart stores, he says he was politely asked to leave. But now he's welcomed like an old friend. In fact, Walmart's corporate office in Arkansas owns three of his paintings. And, unlike many large companies — including its competitor, Target — Walmart is not known for its corporate art collection.

Alec Baldwin is a fan (and an old friend), too. They first met in Paris in 1995 when O'Connell was painting portraits on the streets there. He says Baldwin owns several works from his "Blondes Shopping" series.

When your work is collected by corporations and movie stars (and featured in the national media), your prices tend to rise. But O'Connell says people often assume he's achieved Painter of Light™ level riches, and he has not. "I sold a painting for $40,000, and that's been reported in the media," he says. "But that was an enormous painting. That's not at all typical."

"Don't get me wrong," he adds. "I'm comfortable, but I'm not rich. I'm not complaining. I just want to be able to put my kids through college one day."

He and his wife, landscape painter Emily Buchanan, live what sounds like a simple life in a bucolic Connecticut town. Sam Waterston is their nearest neighbor. 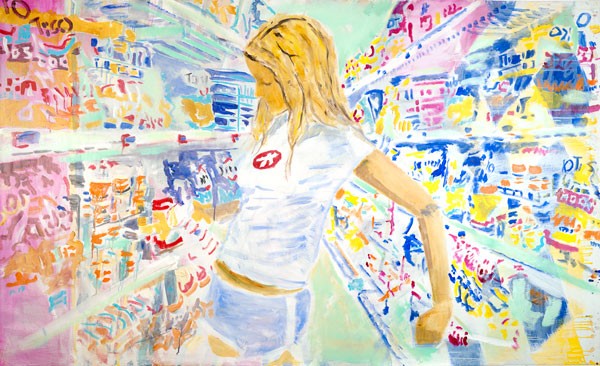 O'Connell is working to generate publicity for his Everyartist.me project, a nationwide effort to spark creativity in kids. (He says there's a "creativity crisis" in schools today and spoke at a TEDx event in Atlanta on how to ignite creativity.) Last year, more than 230,000 kids in 46 states joined in a day of painting, drawing, creativity and community — and, in the process, broke a world record for the largest single day art event in history. A similar event is planned for Oct. 23, and O'Connell is hoping Charlotte-Mecklenburg elementary schools will participate.

There's clearly much more to the Walmart painter than I guessed.

But I did wonder if O'Connell is a Walmart shopper himself. When I asked, he said he's actually a "bad consumer."

"I buy what I need from wherever I happen to be," he says. "When I'm painting in a Walmart, I'll pick up a few things there, but I'm really not a good shopper."

He sees the irony in America's Brand Painter not being particularly brand loyal. "I realize people may wonder, 'What is this minimal consumer, near-vegan doing painting all these brands?'"

It comes back to his captivation with consumption and what he calls "our fascination with affordability." Which of course leads us back to Walmart and its promise of the lowest prices anywhere.

"You can't address global distribution without addressing Walmart," he says. "When you talk about a green revolution, Walmart has the potential to do more than anybody. They can require their suppliers to comply with their guidelines. They've got this goal of making every Walmart truck on the road run by renewable energy by 2018 or something like that.

"Walmart is sort of like the U.S. government," he continues. "They do incredibly good things, but they also make blunders. When something is that big, you can't just have a knee-jerk reaction to it. I don't work for Walmart, and I'm not an apologist for them." But he does note and express gratitude for the company's support for his "Every Artist" project.

He makes a valid case for the good the giant retailer is capable of. O'Connell almost makes me reconsider my position on Walmart. Almost. But then I remember the social media project involving America's biggest retailer and check out "The People of Walmart." And I'm reminded all over again that there are more palatable places to buy my Cottonelle, Crest and Coke.

The only thing I think I want from Walmart is one of O'Connell's paintings.

Brendan O'Connell will be in Charlotte at the Walmart Supercenter (3420 Wilkinson Blvd.) on Aug. 6 from 11 a.m. until 1 p.m. and Aug. 7 from 10 a.m. until noon. He's planning to set up his easel in the produce section and paint one of his favorite fruits, the banana.