VisArt Video Focuses on the Future 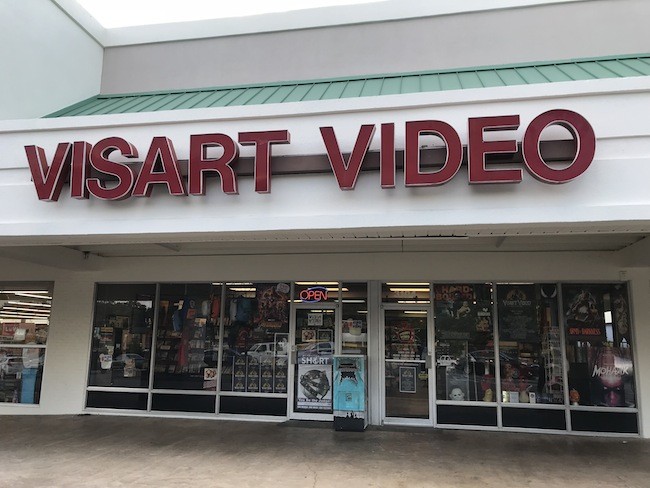 Mickey Aberman paraphrases Mark Twain when he looks at the ups and downs of owning Charlotte's most beloved and hip video store VisArt Video.

"Reports of VisArt's demise have been greatly exaggerated," Aberman says with a chuckle. In fact, the independent video store, which stocks over 40,000 titles in categories including foreign, cult, documentary and mainstream films, is hosting its official relaunch on September 22 at its current location at 3104 Eastway Drive. VisArt will unveil its new screening room at a party featuring local films, including Chris Baker's Glory Days, One More Cup and Zombie Hunters; Benjamin Sliker's Buy One. Get One; Andrew Huggins' Curb Service and Detour; Mike Reda's Him + Her; John Schwert and Jason King's George and Monty: The Documentary; and selections from Charlotte producer and director Tony Elwood. The band Tommy Nations provides live music and VisArt also promises a special announcement about its future.

That doesn't mean that the shop hasn't had a few near death experiences. Aberman, a local attorney, didn't know Visart was slated for closing when he stopped by the store on New Year's Eve 2010 to pick up a few movies to watch with his wife Linda.

"I walked in and there were people carrying armloads of movies out the door," Aberman remembers. He learned that the store was liquidating its stock prior to going permanently dark. Aberman got the owner's number then ducked into the children's video section to place a call. He halted the video fire sale and bought the store on the spot.

"Then I had to call my wife and say, 'Hey, you know how I was going to pick up a couple of movies? Well, I got a little more than that,'" Creative Loafing asked Aberman to pick up the VisArt story at its second moment of crisis, when the store moved from Elizabeth to Eastway in 2015.

Creative Loafing: What necessitated the move from Seventh Street to you current location?

Mickey Aberman: Parking was proving problematic at the old location and rents were going up a lot. It looked like the future was uncertain at that shopping center. We were offered a decent space at Eastway and Central, so we went for it. We lost a lot of our previous clientele. We didn't market the move very well and then we lost our phones for three weeks. People would see that the old storefront was dark, and if they called our number, they got a "no longer in service" message.

I think that fueled rumors that VisArt was deceased, but we picked up a good many new members. People started coming in saying, "Oh wow, I thought you were gone, and then I heard you were still in business." Business has been picking up, particularly since Gina Stewart took over as store manager.

How did Gina come into the picture?

Briana Kalbach was running the store, but she wanted to do less management. Then I ran into Gina Stewart, who I've known as a musician and an actress. She was interested in taking on the job of running VisArt, and I said great. She took over around September of 2017. She and the other employees finished the build out of our screening room. It's really nice, but I can't take any credit of the aesthetics of the room. VisArt's employees did that. We soft opened the screening room by running the films that normally run the store. Then [the Charlotte Film Society's] Jay Morong had some conversations with [store employee] Matt Christiansen. Jay saw the screening room and thought it would work well for [the Charlotte Film Society's] Back Alley Film Series. Since then the Charlotte Film Society has run several Back Alley Film Series events there

On September 22 you're going to announce VisArt's new direction. What can you tell us about that?

Gina and Briana brought to my attention what Scarecrow Video in Seattle has done in terms of becoming a non-profit and expanding its mission beyond passively being a video store. They said we might want to look at doing something like that. I went onto the Scarecrow website and I saw what they were and what they were doing, and it looked remarkably like they had evolved from what VisArt was. I called Kate Barr who runs Scarecrow and she was very supportive of the possibility that we would follow their lead. We concluded that VisArt ought to be a non-profit.

Charlotte has a lot of organizations that support arts like painting, photography and music. The only organization that supports video and film is the Charlotte Film Society and they don't have a physical center or a collection. We have some 40 odd physical copies of the movies [they have screened]. So while some society members only get to see a [Back Alley] film when they screen it, our members can rent the movie and take it home, or they can carry it into the screening room and watch it with their friends. We also realized that there is a large community of independent filmmakers in the area, and unless there is a festival going on, or they can get people to watch their films on the Internet, they've got no real place to assemble or show their work. We thought we could be a center for them as well.

Plus, we've had people who want to volunteer. If you're a regular for-profit business you can't have volunteers, but non-profits can. So it made sense to relaunch VisArt as a non-profit. That's what we're doing on September 15. We're going to celebrate with the relaunching of a reenergized VisArt as a non-profit and as a vibrant arts organization in Charlotte.

Will there be a special screening?

We're going to show a film called Raiders of the Lost Ark: The Adaptation, which the Charlotte Film Society has screened before. It's a fun movie that was made by a bunch of teenagers. They decided they were going to do a scene-by-scene remake of Raiders of the Lost Ark. It's incredible. I'm surprised the Department of Social Services didn't get involved in the movie because they have kids getting dragged behind truck and things like that. We thought that would be a good movie to show because most of the world has seen Raiders of the Lost Ark. If people wandered in after the movie has started, they can pick up on where things are and what's happening. We'll show that twice. In between the screenings, Juli Emmons, who is the president and founder of the Carolina Film Community, is putting together a schedule of films by local filmmakers. They're good in every sense of the word. They're art and they're fun to watch.

One More Cup from Randall Emmons on Vimeo.