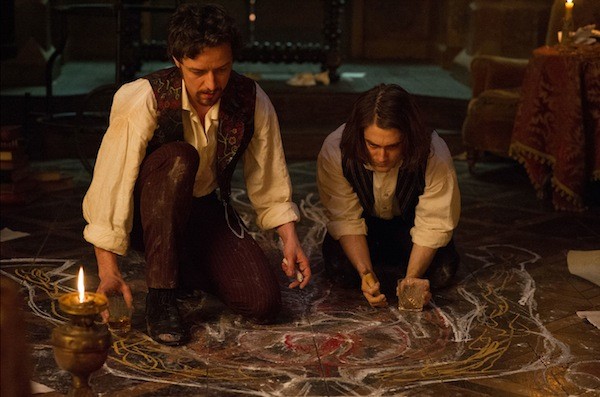 The new horror opus Victor Frankenstein cites Paul McGuigan (Lucky Number Slevin) as its director, but it's entirely possible he's only covering for Guy Ritchie. That's because in its approach and execution, it plays like an exact copy of Ritchie's Sherlock Holmes films, taking a popular piece of brainy literature and turning it into an action spectacle crammed with dashing heroes, a villain who dreams of global (or at least U.K.) domination, and the most elaborate sort of visual effects overkill that money can buy.

James McAvoy plays the title character, but he's not really the star. That would be Daniel Radcliffe, cast as a nameless circus hunchback whose medical knowledge so impresses the good doctor that he makes him his lab assistant, removes his hump by siphoning all of the liquid from inside it, and gives him the name of Igor. There are nods to the 1931 Boris Karloff classic Frankenstein as well as a shout-out of sorts to Mel Brooks' 1974 masterpiece Young Frankenstein (although, sadly, no one exclaims, "What knockers!"). There's an extended cameo by Dawn of the Planet of the Apes' scar-faced chimp Koba. And, oh yeah, there's also a monster, a lumbering behemoth who figures in a risible climax that owes more to Michael Bay than Mary Shelley.

McAvoy and Radcliffe deliver fine performances, but they're let down by Max Landis' script. Instead of portraying men who dare to play God, they come across as boys who would be rather be playing God of War. Too bad it hadn't been created yet.