While poring over decades worth of Creative Loafing issues in research for our recent 30th anniversary issue, about five years into CL's existence I started to notice a name popping up again and again.

Beginning around 1992, I noticed that a journalist named Vance Cariaga was pumping out an impressive amount of stories in his weekly MetroBeat column, along with a bulleted news column called MetroBits, the still-standing bizarre crime column The Blotter and impressive, in-depth, longform cover stories peppered here and there.

Cariaga's work added to the distinguished duo of John Grooms and Jerry Klein, and together the trio turned each week's news section into an amazing collection of reporting, even for a reader 25 years later.

I mentioned Cariaga in a column I wrote in that issue about my research and soon received a gracious email thanking me for the shout out.

The humble Cariaga failed to mention that he had just released some new work — work that both differed greatly and held striking similarities to his CL reporting of years gone by.

I later found out that Cariaga had earlier this year released Money Love and Blood, a collection of short stories that dips into the fictional world of crime that he had covered in real life as a reporter for nearly 30 years.

I reached back out to Cariaga to obtain a copy of the book, a collection of 12 dark stories that hit you with machine-gun speed, and later we met at a local bar to talk about the old days at CL and why transitioning from journalist to author wasn't as easy as he'd hoped. 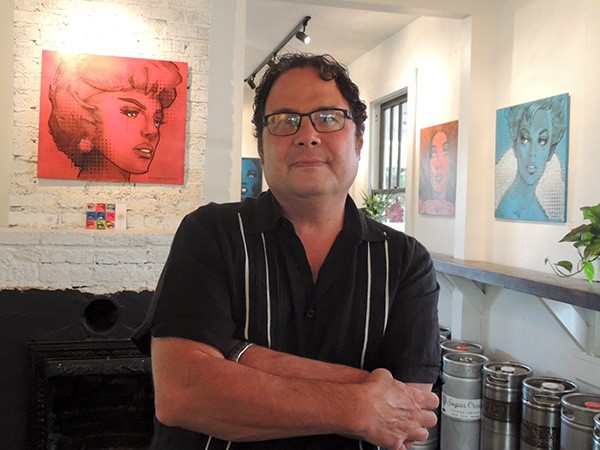 Creative Loafing: You had range in your reporting at CL, but a lot of it did come back around to crime and punishment. Has that always been an interest?

Vance Cariaga: Yeah, I mean, what's not to like about it? [laughs] There's grit and blood and guts. I think when I was at the 'Loaf, we didn't really have a beat, so some of that stuff I just happened to notice.

There was stuff going on with the police. There was really high crime back in the '90s, and it could be a pretty bloody place back then, so it was more looking at it from the perspective of: How did this happen? What contributes to it? What's the relationship between the police and the people? There was just some interesting angles to it.

Back then, and this is still the problem now, there was this tension between certain neighborhoods and the police. The two sides were sort of speaking over each other, and so it created some really down-and-dirty shit that happened back then.

What was it like for you working for Creative Loafing in those early days?

It was actually a lot of fun. I think we surprised a lot of people. Everybody thought, "This is just an entertainment weekly," and then we would hit some stories that sort of caught wind at a higher level and started making a little noise.

Like I said, you didn't have a beat, so we would just sort of cover what we thought was important. People would come to us or I would just go to certain neighborhoods and talk to people.

It was fun just to stick a bug up Charlotte's ass, you know what I mean? They've got all these sacred cows and they didn't take us seriously until they had to; I mean the government, the corporate structure, the media. We did some stuff that really made a lot of noise, so in that respect it was a lot of fun.

I had come up with daily papers and I know what it was like to work with them, and when you have some large corporation breathing down your neck and you have to do it this way or that way, of course Creative Loafing was much more freeform. It was fun, we had a good time. Of course, the pay sucked.

What got you into writing fiction?

I've always thought about it, like you probably think about it. Anybody who writes for a living thinks about it. You know when you're writing fulltime for a paper, which I did all the way up until a year ago, the last thing you want to do when you're off the job is write.

I was kind of lazy in that regard, but then I just decided, I'm going to do it. So I've been doing it seriously for a couple of years now, but I'd always done it.

Are any of the stories in this book inspired by real crimes you covered?

In terms of crime reporting, yeah, all this information you absorb sort of feeds into that. Plus, some of the writers I really like are sort of the crime fiction, crime noir thing that I'm really interested in. So I kind of try to set that mood in this book. And these stories are really short, so you don't really go into too much "This happened, this happened, this happened," it's more like you're setting a mood and capturing a moment.

You write in the intro that you figured writing fiction would be easier than journalism, but it wasn't.

Well, it's really hard, because when you're a journalist you have the story in front of you. When you have to imagine it from point zero, it's very difficult. And it's not easy for me to construct a plot.

That's tough for me — it's like walking through quicksand. Some people can knock it out and they're good storytellers. I think I'm better with characterization and setting a mood, setting a scene. But in terms of actually telling a story, it's very difficult.

What's the biggest difference in the two types of writing?

When you have to come up with it all. And you're also trying to keep the reader in mind — you don't want to lose them. But journalism, I did it for so long I could do it in my sleep. It was never that hard for me. Fiction is a different thing, which is that you're creating something from nothing and you don't know that it's ever going to see the light of day. You're sort of writing for an audiences that doesn't really exist yet.

Are you working on more short stories?

Yeah, but it's getting pretty long. It's a short story about — my wife is a big sci-fi fan, and I've never read or written sci-fi — but it's sort of a story that takes place in this alley, and there's this guy who's a homeless guy and he imagines this nightclub and it gets into this whole thing of: Is he imagining it? Is it real? Is he going to die? I don't know yet.

Right now my problem is that I've stuck myself into something that I don't know how to get my way out of [laughs]. From a plot standpoint it's like, "Where am I gonna take this damn thing?" But I'm still sort of slogging along with that.

Do you hope to move into full-length novels at some point?

It's something I aspire to, because that's where the market is basically. Short stories, it's limited. And I read a lot of novels.

So I will probably work on some longer pieces, there's no question about it, and I've sent this thing around and gotten a little bit of interest in doing other stuff, so we'll see how it goes.