Valerian and the City of a Thousand Planets: Soft center

VALERIAN AND THE CITY OF A THOUSAND PLANETS
**1/2 (out of four)
DIRECTED BY Luc Besson
STARS Dane DeHaan, Cara Delevingne 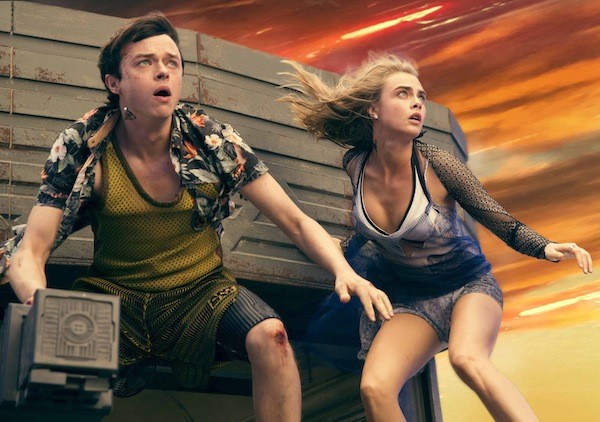 The latest eye-candy achievement from director Luc Besson, Valerian and the City of a Thousand Planets should be seen on a large movie screen — preferably in 3-D — or not seen at all.

Based on the influential French comic series Valerian and Laureline, the movie opens with a clever and amusing prelude that spans the centuries (backed, of course, by David Bowie’s “Space Oddity”) before shifting to a lengthy segment in which the visual effects dominate everything else. But rather than the CGI distancing viewers (as if too often the case), they prove to be completely immersive and instead invoke sympathy for the alien creatures placed front and center.

Unfortunately, the movie then switches over to the human protagonists, and all magic is quickly dispelled. Valerian (Dane DeHaan) and Laureline (Cara Delevingne), two 28th-century government agents doing their part to make the universe a safe place to live, are introduced as they flirt with one another, and the witless banter recalls Katherine Heigl and Gerard Butler far more than it stirs memories of Stanley Kubrick and Ridley Scott.

From there, the film blazes through one frenetic episode after another, all featuring cutting-edge effects that are especially striking in 3-D. The storyline involving a rogue commander (Clive Owen) isn’t particularly inspired but it is perfectly serviceable, and late-inning appearances by Rihanna and Ethan Hawke are properly entertaining. But it’s ultimately all for naught when balanced against the dead weight at the center of the film. That would be DeHaan and Delevingne, neither of whom are especially convincing in their trite roles. Stronger performers might have been able to provide the characters with interesting shadings and distinct personalities, but Delevingne and especially DeHaan are woefully miscast, and the final impression is of two children playing dress-up against a galactic backdrop that ultimately swallows them whole.