Things were so different in 1906, the year E.L. Doctorow's Ragtime begins. Theodore Roosevelt, a conservationist Republican, was in his second term at the White House. The wave of immigrant Jewish refugees, fleeing pogroms in Russia, was at its peak.

American women would have to wait three more presidential elections before they could vote, but the charismatic Emma Goldman was one of the strong voices agitating on the streets. The African-American superstars who sparked the popularity jazz in New Orleans were still children, but Scott Joplin had already codified the musical architecture of ragtime.

When Terrence McNally adapted Doctorow's 1975 novel for the musical that opened on Broadway in 1998, costumes worn by the actors who played Goldman, Tateh the Jewish immigrant, and ragtime piano player Coalhouse Walker added to the impression that Ragtime was so yesterday. Women had already ascended to high elective offices and figured prominently in presidential politics. Jewish immigrants and their descendants had crafted the very framework of Hollywood's studios and Broadway's musical theatre. Satchmo and the Duke were far in the rearview mirror of American cultural history, and Michael Jackson was deep into his reign as the King of Pop.

Surely we had matured as a nation since those primitive days Doctorow and McNally chronicled. Each time I saw Ragtime again, in 2001, 2005, and especially in 2011 — when Barack Obama was President, and Hillary Clinton, his most formidable opponent in the 2008 election, was Secretary of State — my sense of U.S. superiority and progress as a nation continued to grow.

Then came 2016. The shocking election result. The inauguration. The women's demonstrations across America and across the ocean. The opening assault on immigration.

Or how about Trayvon Martin, Ferguson, and the cavalcade of atrocities posted to social media since early 2012? When Ragtime arrives this weekend at Halton Theater, in a new production by CPCC Theatre, it won't seem as quaint and primitive as it did five years ago. In so many ways, we've punched the reset button.

When Brian Stokes Mitchell, as Coalhouse, introduced the rousing song "Wheels of a Dream," he seemed to be dreaming of today. This week, when Charlotte powerhouse Tyler Smith takes on Coalhouse, he will still be envisioning a better tomorrow that hasn't come.

Smith was never under any illusions. "This country was founded on principles that were never all-inclusive," he says. "Our recent presidential results showed the world how much racial hatred still looms here." 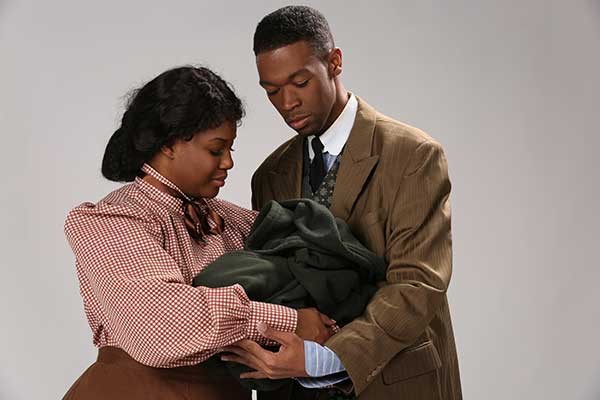 After a couple of lightweight roles at CP in last winter's Irving Berlin revue and last summer's Sister Act, Megan Postle is eager to show some range — and depth — as Goldman. "I have a personal attachment to Ragtime," Postle reveals. "It was my first Broadway show. My aunt took me to see the original cast."

One of the fascinating things about Ragtime is its mix of historical and fictional characters. Doctorow gives cameos of varying lengths to J.P. Morgan, Booker T. Washington, Harry Houdini, Henry Ford, Admiral Peary, and Evelyn Nesbit.

But none of the historical characters is altered more in trafficking with Doctorow's fictional characters than Goldman, who sheds her anarchist and assassin tendencies. "Goldman is the Greek chorus for Ragtime," says Postle. "She speaks for all members of the human race who feel there is inequality."

Emma's character also helps to stitch the various strands of the plot together. Coalhouse and Tateh head two of the three families that anchor this story. They are the outsiders while the third family, prosperous inhabitants of New Rochelle, complete the New York triangle.

Onboard a ship sailing away from America to join Admiral Peary's polar expedition as the show begins, the Father waves a hello across the water to Tateh, who is on a raggedy ship that's just arrived in New York's harbor at the end of its voyage across the Atlantic to Ellis Island. From there, the story forms an epic arc that resolves gracefully as the full company delivers its epilogue. Along the way, we glide past a labor strike by exploited millworkers in Massachusetts, Goldman's galvanizing oratory, horrid police brutality, and audacious, explosive, vengeful responses from Coalhouse.

Smith says the racial issues that have heated up since the most recent 2009 revival of Ragtime on Broadway and the end of the Obama presidency make the characters more relevant in the current political climate.

"Today's Coalhouse is every father, husband, brother and son killed without proper justice being served," Smith says. "Every wife, sister, mother and daughter who have to feel the grief and bear the weight of losing a lost one while nobody seems to care. People like Eric Gardner, Trayvon Martin, Keith Lamont Scott, the mothers of all those murdered in Chicago. There is a line sung in the show saying 'we're all Coalhouse.' It hits home because it is true."

Tom Hollis, CP's drama chair, chose Ragtime for the 2016-17 season back in spring 2015, around the time Donald Trump's announcement for candidacy was greeted with more laughter than alarm. Hollis considered it then in the vein of 1776, the musical that was already set to run last September, just before the first presidential debate.

He still does. "When we were doing 1776 we were constantly being struck by the parallels to life today," Hollis says. "Each generation of Americans has had to face coming up with an answer to these issues because they are woven into the fabric of our country. That we haven't been able to find a permanent solution is the sad irony of our history."

A tragic compromise on slavery clouded the happy ending of 1776, and what happens to Coalhouse clouds the ending of Ragtime. A member of the New Rochelle family who was inspired by Goldman ultimately vows to keep Coalhouse's story alive, while Tateh achieves the American dream.

Billy Ensley, a mainstay of the CPCC Theatre for decades, will play Tateh at the Halton. It's the latest in a series of Jewish roles he has played over in his acting career, including Eugene in Neil Simon's Broadway Bound, and two ill-fated historical figures, San Francisco activist Harvey Milk and Atlanta's Leo Frank. Wrongly convicted of the 1913 murder of Mary Phagan in Atlanta — and subsequently lynched — Frank was the tragic hero of Alfred Uhry's Parade, presented at the Halton in 2006.

So for Ensley, it's a journey back to the same period with a similar rueful takeaway, even if Tateh's story does end happily.

"Current events regarding immigration have only strengthened the way I have always felt about those that are marginalized, forgotten, discriminated against," Ensley says. "We all deserve a chance to live fulfilling, safe and happy lives, and those of us that have that already should do what we can to see to it that others less fortunate can as well.

"Our country was built by immigrants," he says.

Ensley offers advice for immigration opponents: "For those today in favor of a closed-off America, I suggest a trip to Ellis Island and a little research on where the people came from that made this country the wonderful and rich country that it is."

Travel advisory: Ellis Island is just a short boat ride away from the Statue of Liberty, depicted on the cover of numerous editions and translations of Ragtime.