Five photographers share how you, too, can be an urban-exploring enthusiast.

Urban exploring is hardly a new practice, tracing back to the 1970s, but in recent years, it's grown increasingly popular. The social news and entertainment website Reddit has tens of thousands of contributors to its AbandonedPorn and Urbanexploration forums. There's even an iPhone app that offers suggestions of "hundreds of locations" to explore, GPS mapping and the ability to upload your own photos.

But urban-exploration enthusiasts do more than just take cool photos to post on Instagram; they force viewers to notice the abandoned and the camouflaged. And certainly, there's plenty to uncover in the Charlotte area.

Here, you'll find the fruits of urban exploring from five Creative Loafing contributing photographers — consider these captivating images inspiration if you aspire to document the unseen. We've also asked them to share some tips on what to bring, how to avoid getting caught and more. "Ask for forgiveness, not permission" was the resounding note of advice.

"Historic preservation is the ultimate recycling," says Desiree Kane, CL's travel/tech blogger, whose photos are among the bunch. "It blows my mind that we throw away whole buildings. I take these pictures to remind us of the things we discard and understand the value of the things we have."

Disclaimer: Creative Loafing does not encourage its photographers or readers to trespass on private property. Friends, that's illegal.

Slideshow Urban-exploring in Charlotte, beyond 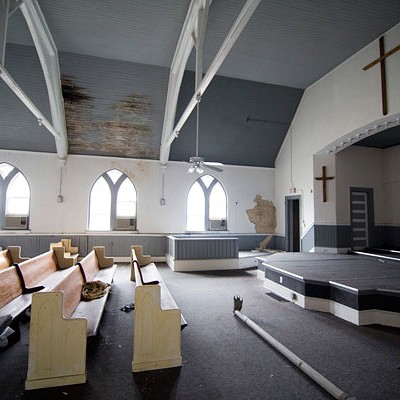 GET THE SHOT: ADVICE FROM THE EXPERTS

Where should you go?
"Drive around and look for places that look abandoned. The best places in Charlotte are the industrial areas of town: off Graham Street near Uptown, off North Tryon, behind the Men's Shelter along the railroad tracks. Be careful; you may not be alone in these areas." — Mert Jones

"Up Freedom Drive past the obvious parts of town — hook a left anywhere after the airport." 0x000A— Desiree Kane

"Do your own footwork — it only adds to the experience. I either just pull over on the side of the road, or new spots come up in conversation with local people. Talk to the elderly or the old man smoking at the convenience store." — Justin Driscoll

What should you bring?
"I never have a purse with me when I'm shooting, so I always keep my driver's license in my back pocket or in my boot. If someone kills me, at least the police will be able to identify me." — Natrice Bullard

"Water, flashlights (these are crucial), camera bag, cell, sometimes a facemask or bandana — the asbestos in these places makes you feel like you smoked a carton of Marlboro red cowboy killers." — Driscoll

How do you avoid getting caught?
"It depends on the areas, but shooting on Sunday mornings always works for me. There aren't a lot of people out and about and it gives me time to explore without interruption." — Bullard

"Be as obvious as possible. I've found that strutting around like I'm supposed to be there, especially when I'm in the middle of town, often in the middle of the day (I don't really explore at night for safety's sake), it works out much better." — Kane

What's the scariest or weirdest thing you've ever found?
"I haven't been anywhere scary, but I did find a place in the middle of the desert once that looked like a hunting structure but it turned out to be a sex dungeon. I knew so by the spray-painted declaration of slave-hood by one of the participants and included the mistress' email address in case anyone wanted to inquire further. People are into some crazy shit, I know that, but this felt uncomfortable because I felt like I was disturbing someone's personal space." — Kane

"I was at an abandoned V.A. hospital and found patient records where it was clear that they were giving WWII and Vietnam vets electroshock therapy." — Driscoll

"I haven't come across anything too weird, usually just dead animals, old moldy furniture and strange people that may be living in abandoned areas." — Bullard

"I've come across homeless people and crackheads a few times. I'm just always friendly and sometimes include them in the photos." — McGuire