Taking it to the streets

Standing at 5 feet 4 inches, the petite MaryBe McMillan doesn't look like your stereotypical union boss, and for her, that in itself is part of the message she's trying to send.

"There are a lot of myths and stereotypes out there," the secretary-treasurer of the NC State AFL-CIO says. "I always joke with folks like, 'Look at me, I'm the big union boss and I'm not big. I don't smoke cigars. I'm not male.' It challenges some of the stereotypes."

She says spreading the message that the nearly 120,000 union members that make up North Carolina's 200 unions are just normal, everyday people will be a part of a canvassing campaign that started on September 10, but that's just a small part of it. The real goal will be to get the word out about candidates her organization has endorsed, especially in three races that members see as most crucial to worker's rights: the presidential, gubernatorial race and senatorial race here in North Carolina.

Recently, as the latter two races have become more heated and the gaps between the incumbents and challengers have tightened, the national AFL-CIO, the largest federation of unions in the United States, recognized that North Carolina will be an important battleground in November. The organization re-prioritized the state by giving it a Tier 1 status, meaning a flood of money and resources will be shifted to organizers within the state in an attempt to lobby for the election of their endorsed candidates — namely Hillary Clinton, Roy Cooper and Deborah Ross — and a flood of union members will be hitting the streets to inform folks about each candidate's records regarding workers' rights.

"It will help us build a better mobilization structure so that we can hopefully eventually change some of the anti-union and anti-worker laws that we have in this state," McMillan says.

The national AFL-CIO will also send a large team of lawyers to North Carolina once voting begins to monitor polling places and protect against voter suppression in a year when right-wing rhetoric has encouraged residents to be militant against the voter fraud myth and local election boards have worked to cut early voting hours.

"We'll be working closely with organizations like Democracy North Carolina to promote the voter protection hotline and to educate working people about their rights under the law, including the availability of same day registration, expanded early voting, and that they won't need to show a photo ID to cast their ballot," said Jeremy Sprinkle with the NC State AFL-CIO.

Creative Loafing met with McMillan at the International Brotherhood of Electrical Workers (IBEW) Local 379 union hall in west Charlotte just a day before more than 100 members would come together there to launch the new campaign, joining thousands of others across the country for a national day of action.

She explained how this year will be different from past organized labor campaigns in North Carolina in that efforts will not just target other union members but the population as a whole. Canvassers, phone bank volunteers and mailers will be targeted at some non-union voters chosen by an algorithm that considers someone's past voting patterns and other data.

"We've traditionally just done a member-to-member program, so union members calling other union members and knocking on other union members' doors, and that's still our primary focus, but because of these additional resources we can also knock on the doors of the general public as well," McMillan says. 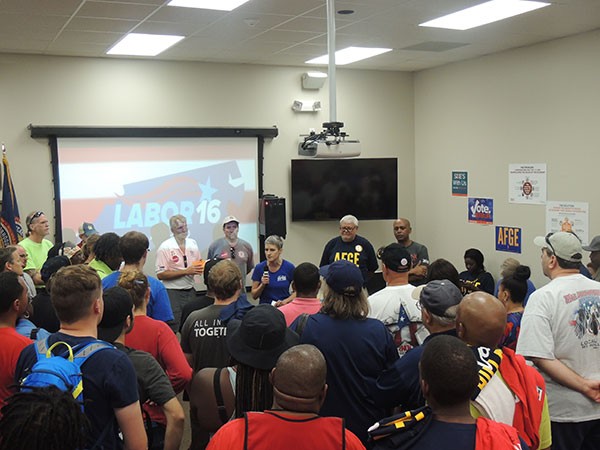 She hopes the efforts will help set North Carolina's organized labor movement up for success beyond the election, to help boost the state's poor reputation as one of the country's least unionized, "constantly flip-flopping with South Carolina for last place," as she puts it.

It would be tough to tell that North Carolina had any problem with unionizing from looking at the large group of high-spirited people who showed up on Saturday to kick-off this new campaign with four hours of canvassing through Charlotte neighborhoods. Organized labor leaders from around the state and country were in attendance and some addressed the crowd inside IBEW Local 379 before taking to the streets.

Tefere Gebre, executive vice president of the national AFL-CIO, addressed the crowd before walking through Charlotte's Wilmore neighborhood to connect with neighbors, targeting houses with an app used by all the canvassers, some on iPhones provided by AFL-CIO.

A day before joining him on that walk, CL spoke with Gebre over the phone from his office in Washington D.C. about the importance of North Carolina's upcoming elections. He made it clear that the North Carolina General Assembly inspired him and other AFL-CIO officials to look a little more closely at the state.

"Your state legislature would be how North Carolina was put on the top of the list," Gebre says. "With some of the draconian stuff that the state legislature and the Governor has been trying to do, including suppressing the vote, that has been a concern of ours for a long, long time before this week."

Just as with organized labor efforts across the country, organizers will also be stumping for presidential candidate Hillary Clinton, whose stance on the Trans-Pacific Partnership Free Trade Agreement and support for a higher minimum wage has gained her the support of most unions. And while Donald Trump's anti-worker practices within the existing companies and properties he manages is bothersome to many union members across the country, for Gebre, an immigrant from Ethiopia, it's a more personal concern.

"As an immigrant myself — the first immigrant elected to the national AFL-CIO as an officer — the rhetoric of this national election personally for me has been very scary and very nerve-wracking," he says. "This country cannot afford someone like Donald Trump in the White House. If we win North Carolina, that pretty much assures us that Donald Trump stays away from the White House." 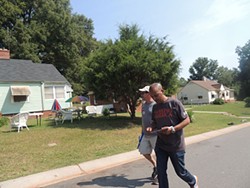 But as far as canvassing here in Charlotte, Gebre is ready to talk about any of the races that make up what he calls "the triple whammy" of winnable races for pro-worker candidates in our state. Most folks in North Carolina — and now, unfortunately, in the United States — are familiar with McCrory's missteps during his first term as governor, especially in regards to House Bill 2. Canvassers will be informing folks of the lesser knowns effects HB2 has had on workers' rights.

While McCrory has become somewhat of a pariah in Charlotte following the passing of HB2, Deborah Ross's campaign to unseat Sen. Richard Burr from the spot he's held since 2005 is not brought up as often around North Carolina's water coolers.

At just the second house Gebre visited on Saturday, a west Charlotte man quickly made it clear how he felt about Donald Trump ("That man just ain't hitting"), but said he hadn't heard about Deborah Ross or her campaign. After a short talk with Gebere, he said he would definitely be going to vote and would vote for Ross.

"[Deborah Ross] is a priority because we think the Senate can switch [to a Democratic majority]," Gebre says. "In order for that to happen, we have to put our heart and soul into North Carolina and helping Ross win that state. We're going to do everything we can to get Ross across the line and to victory."

Tim Rorie, president of the Southern Piedmont Central Labor Council, one of eight divisions within the NC State AFL-CIO, met with Ross earlier this year. He says he reached out to both Ross and Burr to converse about workers' rights and got more than he bargained for from Ross.

"We had a conversation and she asked me to tell her about my life as a letter carrier," Rorie recalls. "So I explained it to her, and it wasn't about just the issues but she wanted to know about the workforce, what the job entails, what has changed. So I explained it all in detail."

"I haven't heard from him," Rorie says.

Gebre says it's his wish that more Republicans would work with the labor movement, but it's been his experience that nobody on the right is interested.

"We wish we had some other friends on the other side of the aisle to talk to us and work with us, but we have not had any luck in getting that to happen," he says.

Once Election Day does come to pass, whatever the results, McMillan is confident that the new energy being pumped into North Carolina will be just what the state's organizers need to light a fire that will stay lit long past November. For the union boss that's not your average union boss, it might also help shine a new light on who it is that could be knocking on your door next.

"Hopefully by knocking on the general public's doors folks will be able to see that union members aren't these scary thugs and mobsters," McMillan says. We're their neighbors, we're the folks that deliver the mail and put out the fires. We're average, everyday people who are just looking to build better lives for ourselves and our families."