Paper shuffles in the background as the half-prepared radio newscaster interrupts regularly scheduled programming to break the news. An affidavit. The mayor of Charlotte. Arrested.

The big local news story of March 26 should have been one of closure: a multi-billion dollar settlement Bank of America reached with the Federal Housing Agency over misdeeds the Charlotte-based bank committed that led to the financial crisis. But that morning, black suits had appeared unannounced at City Hall and headed for the mayor's office. A security guard stopped city staff from getting too close as FBI agents searched Patrick Cannon's office.

A few months before, men dressed as electricians told mildly curious passersby they were installing new lighting on the 15th floor of the government building. There was no reason to think twice about them, not then.

In August 2010, a local cop working undercover came across information about corruption that he would eventually take to the FBI. By 2013, the mayor pro tem of Charlotte was in a SouthPark luxury apartment allegedly accepting his first bribe from an undercover agent. Cannon would use the influence of his official positions to accept more cash, plane tickets and a hotel room. He ran for mayor on platforms like fiscal prudence and "making tough choices," when in reality he'd illegally accept as much cash in one night as he'd make in a year as mayor.

To the public, Cannon would tout his 20 years in office as evidence that he could "get things done." To FBI agents posing as property developers, he'd use his experience as evidence of his leveraging power.

ON THIS CHILLY March day, Cannon thinks he's on his way to collect another cash payment from the agent posing as a venture capitalist he's had a relationship with since 2010. Instead, he is arrested. Charges include bribery, wire fraud and extortion.

A lone TV camera and reporter follows Cannon as he walks out of the U.S. District Court Western District of N.C. after posting bond. Dressed in a suit, yellow button down and blue-and-black striped tie, Cannon avoids the camera and says he has nothing to discuss at the moment. The crew backs off as he approaches a crosswalk. The tall apartment building across the street shields the mayor from the sun as he briskly crosses alone, head down.

The day before, he visited an elementary school, posing for a photo with a student. 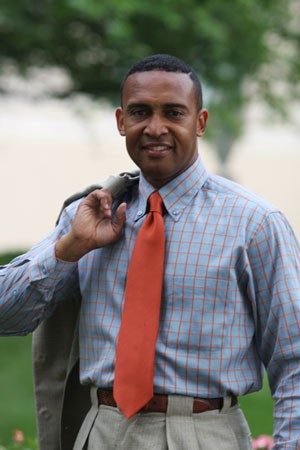 PATRICK DEANGELO CANNON announced he would run for mayor on May 21, 2013, in Elizabeth Park. Elected to City Council in 1993 as its youngest member ever, supporters said it was his time. From behind a podium that warm day, he told the crowd he was the change Charlotte needed.

"I'm running for mayor of Charlotte with only one agenda: to move Charlotte forward. I'll do that by continuing to tackle the tough issues and, as my record illustrates, making things happen."

Cannon had invited whom he thought was a new friend to the ceremony — he was actually an FBI agent posing as a venture capitalist from Chicago interested in developing property in Charlotte. Four months prior, the agent, known in an affidavit as UCE1, had handed Cannon the first cash bribe he accepted: $12,500, exchanged in that SouthPark apartment. The "zero percent return-on-investment" loan was for a business Cannon was allegedly creating called HERS. HERS, which isn't registered with the state, would sell feminine hygiene products.

Two days after the ceremony, UCE1 introduced Cannon to UCE2, an undercover agent posing as a Las Vegas real-estate investor, to discuss a nightclub UCE2 wanted to develop in Charlotte.

The following week, UCE2 and Cannon met at the business Cannon owns, E-Z Parking, to discuss future developments. Cannon agreed to travel to Las Vegas to lie to "foreign investors" about the length of time in which he had known UCE1 and UCE2 to encourage them to invest in UCE2's company. Cannon told UCE2 he was "in it to win it for you," adding that for development projects, Cannon could obtain money set aside for affordable housing, one of the "tough issues" he campaigned on. Cannon got to select his hotel and opted to take a city tour.

The worst kept secret of the 2013 mayoral election was the uneasy feeling Cannon gave Republicans and Democrats alike. Proof of his corruption came in October, less than a month before he was elected mayor, when the Charlotte Observer reported that Cannon had participated in a questionable vote as a city councilman that may have benefited E-Z parking. Still, Cannon was sworn in on Dec. 2, five months after his Vegas trip. One of his first decisions was to rename some city committees to better reflect their missions. The Council Manager Relations Committee became the Governance and Accountability committee, charged with reviewing organizational process to ensure local government "is accountable to the public," according to a city document.

AROUND 1:30 on what should have been a typical Wednesday, oblivious City Council members file into the Charlotte-Mecklenburg Government Center for an environment committee meeting on the 15th floor. Security guards meet them at the elevator. Stationed around the floor are tense city staffers, some to inform council members of Cannon's arrest, others to kick reporters out who showed up after they heard the news. A few Council members appear to be in disbelief. One leaves before she can start crying. Others don't seem too surprised.

The Mecklenburg County GOP quickly speaks. By 3 p.m., its leaders issue a statement calling on Cannon to resign. It'll be days before Anthony Foxx will comment on the matter.

Cannon's wife Trenna comes and goes from the couple's home in Ballantyne all afternoon. TV reporters follow her, but she has no comment. She's mentioned in the affidavit as accepting some of the cash, at one point thanking an undercover agent over the phone for a $1,000 payment. Cannon's children and his mother remain inside. At about 5, Trenna returns from an outing in her silver BMW 5 Series, this time with her husband in the backseat. He shields his face from cameras. FBI agents have spent the morning searching his home, taking away boxes of files and a computer.

Around 5:40, stunned City Council members file into a second-floor government center conference room to tell TV cameras Cannon will remain the mayor until he resigns or is convicted. Speaking on behalf of the group, Councilman Michael Barnes says they were just as surprised as the rest of the city to learn of the arrest.

Reporters begin to call local officials for comment. County Commissioner Pat Cotham is on her way to an event off Billy Graham Parkway when she gets a call. Unaware of the news, she asks for a minute. "I was sad. [It] felt like someone died." Days later, Cotham reads a city proclamation at an event at the Levine Museum in which she has to mention Cannon's name. "It was hard to read."

A few blocks away from the press conference, the Charlotte-Mecklenburg Police Department in Uptown is winding down for the day. Two officers sit behind a desk that allows them to see who comes and who goes. One is clean-shaven, the other sports a buzz cut. Their uniforms are the deepest shade of blue. They sneak peeks at a small television mostly hidden but audibly tuned to a local news channel reporting on the story of the day. The story of the year. They talk about the media feeding frenzy at the government center.

Meanwhile, a California senator known for being anti-gun is arraigned at the U.S. District Court in San Francisco for allegedly participating in international weapons deals.

TWO MONTHS into the job, UCE2 and another agent known in the affidavit as the "Skeptical Investor," visited Cannon in his mayoral office and gave him a leather briefcase filled with $20,000. As mayor, a part-time position, he would have made $22,000 in a year.

Cannon hosted the Mayor's Job Fair a day later. A website created for the event reads: "Even while unemployment numbers are falling, many people are looking for their next opportunity."

IN SOUTH CHARLOTTE, inside the headquarters of a major retailer, a group of employees crowds around a television near the cafeteria. They watch the news in disbelief.

A middle-age man in a three-piece suit says he's angry with the FBI for waiting so long to arrest Cannon. "I can't believe they let him run for office and get elected knowing what they already knew."

A young woman wonders aloud why Charlotte, why North Carolina, breeds so many crooked politicians. "Pat McCrory and the Duke Energy [investigation], John Edwards and his sex scandal, now this?"

Photos eventually show up on social media of people fanning dollars by their face, which Cannon allegedly did when he was handed the first bribe. They call it #cannoning. He resigns at about 7:30.

Long after the FBI had left Cannon's home, a reporter knocks on the front door. The only member of the family who answers is a wide-eyed beagle.

Michael A Cooper Jr., Ryan Pitkin and Erin Tracy-Blackwood contributed to this story.