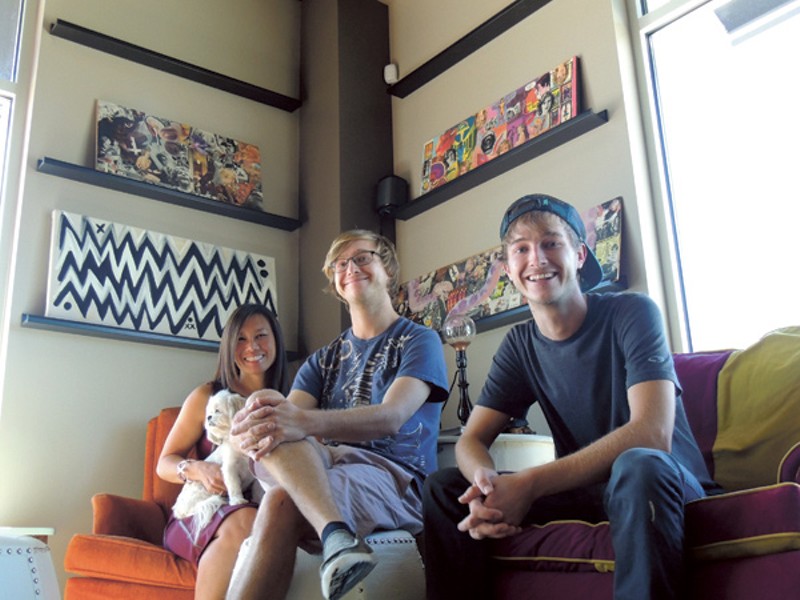 (From left) Kimie Silver, Vinny and Tyler Trierweiler at The Dirty Hippie.

It could be said that the Trierweiler brothers have come a long way since appearing on an MTV docuseries episode titled, True Life: I'm Preparing for the End of the World.

Geographically, the statement is certainly true. The 27-year-old twins, Tyler and Vinny, have also spiritually moved past the idea that a chosen group of highly evolved humans would ascend to a fifth dimension via a paradigm shift, leaving those of us still in the third dimension to suffer through a living hell.

Since filming the True Life episode, in which they preached the previously stated opinion, they left the art co-op in which they lived in Indiana to travel the country by RV. After breaking down in Asheville two years ago, they settled there for a year, then made their way to Charlotte, where they — along with local artist Kimie Silver — will open a new artistic venue on October 30 at the southernmost point of Historic South End.

The Dirty Hippie will offer collaborative opportunities between artists while serving local beers, cheap and creative cocktails and coffee specialties. Creative Loafing sat down with the trio to discuss what they hope to accomplish.

Creative Loafing: To most viewers, your behavior in True Life seemed embellished to say the least. How real was that reality TV episode?

Tyler Trierweiler: It was just a lot of fun. We definitely have eccentric beliefs when it comes to spirituality, and just being humans in general. It was a mix of both.

We believe — or we hope — that humans as a race are consciously becoming more aware of each other and becoming more loving beings, and we hope that we evolve collectively. That's definitely a belief that we have. I don't think the world is going to physically end, but we definitely believe in the evolution of humanity as a whole.

You have eclectic events planned daily. Tell me about some of these events.

Trierweiler: We're having different unique entertainment every night of the week. You don't even have to know the schedule, you can just drop into The Dirty Hippie any night of the week and you know there's going to be something entertaining happening and it's not going to cost you everything in your wallet.

For example, Free White Trash Buffet (Thursday nights) is a time when you can come together and express your love for macaroni and cheese and Fritos and potato chips and we'll have whiskey specials.

How do you plan to incorporate art into the Dirty Hippie atmosphere?

Kimie Silver: I was already running Paint Craze from this location, bringing art into the community and giving opportunities for local artists to be able to teach. We were never talking about closing it down but just evolving it and expanding, bringing in the other elements of the artist community, with music and fun drinks.

Trierweiler: I think every community should have an outlet for expression for all people, whether you're eccentric or not. We want to be that outlet. We want to be a collective hub for anybody with artistic spirit to come together and network and collaborate on different ideas.