My interview with Skyland Family Restaurant owner Dimitrios Kakavitsas — or Jimmy to friends and customers — took an unexpected turn when he said, "I've been in prison," then broke down in tears.

The story of Kakavitsas' imprisonment has been reported; he even wrote a book about his experience titled In Pursuit of Freedom and Justice after his release. His penchant for breaking down emotionally is also well-recorded, both in that book and in news reports of his trial. But in the moment, it still came as a shock to me.

Kakavitsas, 65, cried while he told the story of his son leaving for prison a week before Christmas in 2003. Jimmy would follow in January. Months before, Jimmy and his son, Kostas "Gus" Kakavitsas, 43, both pleaded guilty in federal court to racketeering. The charges stemmed from a high-stakes game of poker authorities alleged the father and son ran out of a spot called "The Basement," in Jimmy's "kafenio," as he calls it (a café).

Though both son and father insisted they were being charged for hosting a friendly card game, prosecutors said they were taking in $500,000 in illegal gambling profits annually. They were both sent to a federal correctional institution in Butner, North Carolina.

For a year, Jimmy and his son fought the charges, hiring lawyers to do battle with federal investigators and the prosecutor, but his lawyers recommended accepting a plea bargain. 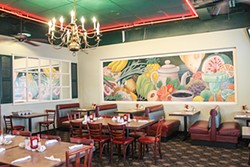 "At the end, [the lawyers] called me down, they said, 'Jimmy, you've got two hours to decide — you take this plea or they're going to lock up all your family in jail. And this is not threat, this is promise,'" Jimmy recalled in his heavy Greek accent. "So I had no choice but to do what they say."

Jimmy spent 28-and-a-half months in prison and paid a $350,000 fine. Gus served a few months longer than his father.

To this day, Jimmy claims he and his son were innocent of the charges. "People come around me and play cards there [kafenio], for fun," he said. "I don't charge nothing." The games became so popular, they were happening three times a week, he said.

Jimmy started writing his book while still in prison, aiming to highlight the injustices of America's legal system.

Published in 2010, In Pursuit of Freedom and Justice chronicled his life in Greece, his country of origin; his work life in America; time in prison and a few years beyond his release. Still available at Skyland, the book touches on prison overflow, the HIV/AIDS epidemic, natural disasters and religion. He even dedicated two chapters to his support of artists and professional wrestlers. 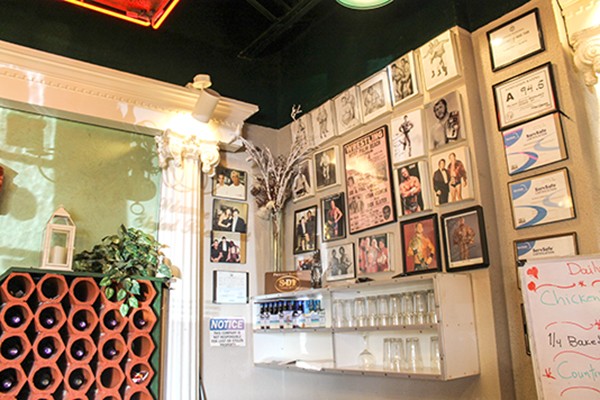 The book describes how his relationships with local police were misconstrued as dishonest; multiple Mecklenburg County sheriff's deputies went to prison in part for their role in helping protect "The Basement." Jimmy also claimed in his book that other Greeks in the community were jealous of his success and falsely reported the sale of drugs and alcohol and gambling to the police until eventually the FBI was brought in for an undercover operation to investigate rumors of a police-protected gambling ring.

"They put me in prison just to take what little money I had," Jimmy said. "They sent two Greek FBI from New York here for two years. They become friends with my sons and 20 more. They destroyed 20 families by making them do stuff. They say they have restaurants in New York and they have a lot of money."

According to Jimmy, the undercover officers repeatedly offered money to the people who frequented the cafe. Gus accepted a $50,000 loan and was told to keep 10 percent and only pay back 90 percent of the total, he said.

"So at the end, when they [FBI] saw that all these people have nothing to give and they spend a lot of money here for two years," Jimmy said. "They put me as the leader of all of these kids."

From Greece to America

Jimmy was born in 1952 in a small village in Greece. He came from a large family and spent much of his time as the shepherd for his father's goats. Jimmy's help was needed on the farm, and often, shepherding was put before school. "As soon as I finished my six years of school, I left," he said. "I'd never been to school again."

At the age of 15, Jimmy was offered the opportunity to move to Charlotte where his uncle lived. His first job was cutting onions at South 21 on Independence Boulevard. "I worked for Sam Copsis," Jimmy said. "I went there and begged him to give me a job and he asked me if I could promise him I'm not going to cut my hands on the machines in the kitchen."

It was 1967 and Jimmy earned $16 per week. Over the next twenty years, he moved back and forth from Greece to Charlotte trying to make a living. During his time in Greece, Jimmy was introduced to Venetia, a woman who would become his wife of 44 years and mother of Gus and his brother, Vasilios.

In 1986, Jimmy opened Plantation Restaurant at the intersection of Eastway Drive and The Plaza with partners. After it closed, he opened Skyland Family Restaurant in 1993. The restaurant is similar to a diner with a casual atmosphere, large menu and daily specials. They offer 25 fresh vegetables daily and other menu items such as chicken livers, beef liver, meatloaf, braised beef tips and pot roast.

Entrees such as chicken parmigiana; Greek-style baked chicken with oven potatoes; homemade chicken and dumplings; and roast turkey over dressing and gravy are priced between $9 and $11. There are a few exceptions for steak and ribs, but even those are in the $15 range.

Skyland serves 500 people a day during the week and more than 1,000 a day on the weekends. His secret to staying open for the past 23 years is about the food and the customers. Jimmy guessed that about 70 percent of his customers are regulars. He makes sure customers get attention and respect because they pay the bills. Jimmy won't serve food he wouldn't eat, he said.

The menus' variety requires a lot of preparation each day. Jimmy expressed concern that this style of a restaurant may not survive. "The new generations, they want something easier than this," he said. "Like my sons say, after me, they don't know if they can handle it. It's just too much."

Skyland is open 24 hours a day, seven days a week, except when they close on Mondays at 9 p.m. to do a thorough cleaning. They open back up on Tuesdays at 6 a.m. The staff of 25 includes one prep cook who has been with Jimmy from the beginning.

When Jimmy went to prison, he had to take on a partner for the restaurant and depend on his wife to keep Skyland operating. Despite the overwhelming pressure to keep the restaurant running, she visited him in prison every month. In 2006, the year Jimmy and Gus were released from prison, Skyland began hosting a free Thanksgiving dinner to anyone needing a meal for the holiday. He also flies Santa in on a red helicopter to the restaurant's parking lot every year.

It's clear that Jimmy loves being around his family, friends and customers every day, and perhaps that why his anger at the legal system is still present 12 years later. His life was forever changed by what he calls "the incident."

"That's why I say I have to work until I die," Jimmy said. "I'll never catch up again. I lost a lot of time, a lot of money. What I'm hoping is to stay healthy and enjoy life, and work."