Truckstop Preachers aim to entertain with unique brand of country 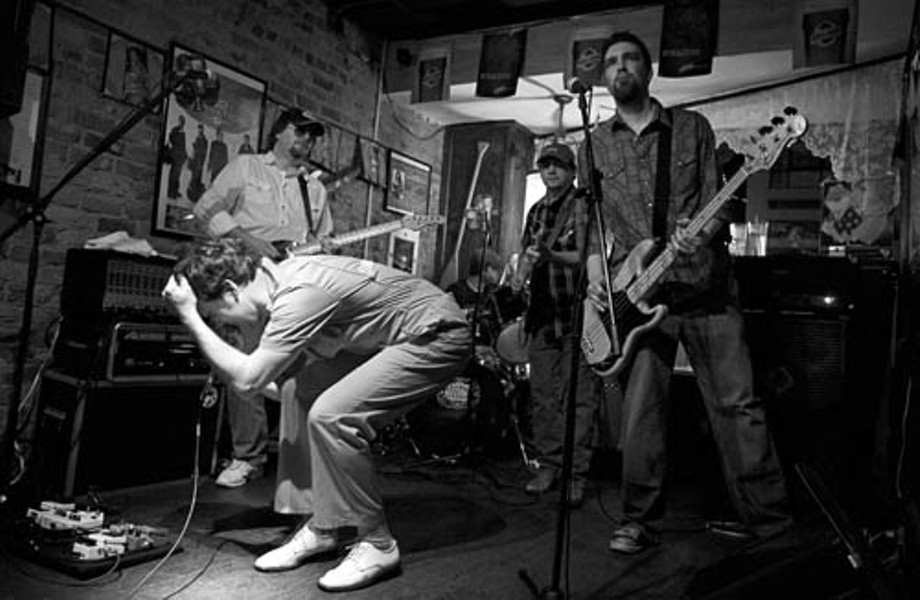 Johnny Cash prances around onstage wearing nothing but his boxers and a deer head. Dave Dudley wanders through the audience, giving lap dances while singing "Truck Drivin' Man." Welcome to a parallel universe created by the Truckstop Preachers, where country gets stood on its ear

Preachers front man Nathan Palmer is the man in the deer head and boxers, but his voice, a blend of Cash and Dudley, is just as much of an attention getter. "I really can't sing very good, so I sing deep," he says, laughing. But audiences have no problem with his voice.

The Rock Hill, S.C.-based band plays a variety of venues, from punk/rockabilly festivals like the annual Cash Bash to opening for David Allen Coe and Dwight Yoakum. "We're more just outlaw country, but we rock it up a little bit," Palmer says, adding that the band's originals sound like Merle Haggard and Coe. "But we try to amp it up, we don't have a steel guitar, so we get thrown into the rockabilly thing. We're a little bit different. We're a breath of fresh air."

Palmer and bandmates Lee Godwin on guitar, bassist Glenn Jones and drummer Mike Elder first started breathing life into their skewed country vision in 2001 as Four on the Floor. Their first release, Cowboys and Engines, earned them the respect of European audiences when they toured overseas in '04. They changed their name to The Truckstop Preachers in '05 after discovering that 20 other bands in the U.S. shared the Four on the Floor name.

Although none of the group are truckers or preachers, they still preach the gospel of the 18-wheeler lifestyle. "We like a lot of the truckin' stuff -- it rocks," Palmer says. That stuff would of course include Dudley's "Truck Drivin' Man" as well as Commander Cody and His Lost Planet Airmen's "Semi Truck" -- "Here I sit/all alone with a broken heart/I took two bennies/and my semi truck won't start."

Palmer says the band's ministry and message is not structured in any particular direction. "We just pretty much like to have a good time onstage." Palmer says that when they first started the band, it was geared to include as much entertainment as music, giving him carte blanche to do something stupid. "I'm still doing stupid stuff onstage," he says.

Crowd interaction is a big deal for Palmer. "I try to have two or three mike cables so I can get out into the crowd, sing to 'em , give 'em lap dances." That's after he's already warmed up the crowd with a fist full of truckers' favorites he's fond of delivering from behind a homemade hand-held Johnny Cash mask cut from old vinyl album covers and mounted on tongue depressors.

And then there's the deer head. Palmer has no explanation nor excuse for the critter creation, but it still stirs up a crowd when he does his antler dance. But it has gone through some changes over the years. "I think I'm on my fifth or sixth incarnation of the deer head," Palmer says. "We took the antlers off because there was fear of hurting someone."

But hurting someone is at the core of all good country, and the Preachers don't back away from that musical theme. "I'm packin' up my bags/sellin' my dogs, fixin' to rob a liquor store," he proclaims of his plans to enroll in a max security facility, sounding like Waylon at his most outlaw on "Lonesome For Folsom." Palmer tells a soon-to-be ex-loved-one that "My friends all say you're a whore/Razor wire and 20-foot walls keeps me safe from a woman like you."

"Most of our songs are a little bit misogynistic," he says, laughing.

Even though Palmer once described the Preachers as "a drinking band with a country problem," there's more in the mix than just country. Aerosmith pops up as an influence, and if you listen closely on the record, you can hear guitarist Goodwin getting in touch with his inner Joe Perry on "#5 With Coffee." "He likes to shred a lot more in live shows," Palmer says of Goodwin. "He loves Aerosmith and Alice Cooper."

Despite their love of performing and the fact that their last release, 2005's Truckstop Preachers, made it into the top 50 on the Americana charts, the band has no plans to pursue music full time. "You're gonna give up your life to really not make that much money, or you're gonna do something you like and you're gonna do it for fun. And that's the route we chose," Palmer says.

Everybody in the band has a day job. Palmer has Woodcycle, his own Charlotte-based cabinet and furniture refinishing business. When you log on to his website, www.woodcyclerefinishing.com, you find a very different Palmer from the deer-headed country singer, looking very professional, fondling a hand sander while he tells you about his lacquers. Guitarist Goodwin, bassist Faulkner and rhythm guitarist Jones work in a music store, and drummer Elder works for a pool store.

He says even though the band does have half a dozen new originals, he doesn't think they'll button 'em up into an album any time soon and tour nationwide. "You might be talking to one of the laziest bands in the world," Palmer chuckles. "I don't know why we're that way. It's almost better not to try, then you don't feel like you lost anything. We're really kinda apathetic."

But that doesn't mean that you won't be thoroughly entertained every time you come to see the Preachers play their limited local circuit that covers the Carolinas from Spartanburg and Columbia to Winston Salem, Chapel Hill, Raleigh and, of course, Charlotte.

"I'd like for us to be remembered as a band that really was very entertaining live, and I think we sound good too," Palmer says. "That's all -- keep it simple and give the people a good show."

The Truckstop Preachers will be a part of DudeFest. This event will be held throughout the neighborhood of NoDa. One ticket admits you to all venues. Tickets are $15 in advance and $20 on the day of show. Doors open at 3 p.m. Bring forth your inner dude to benefit charities including Save the Ta Tas and Pints For Prostate.