Troubled tenants look for light at the end of the tunnel 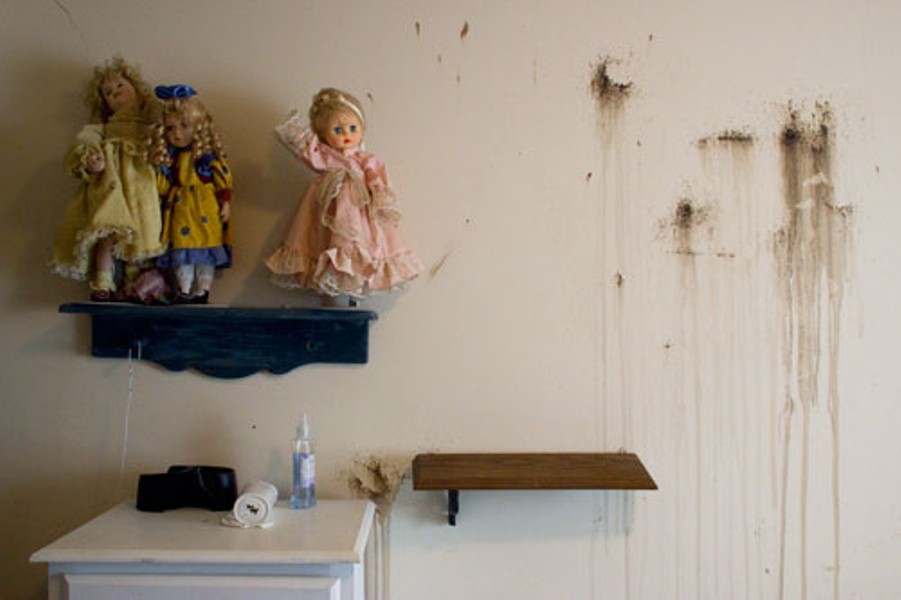 Tenants of the troubled Sandlewood apartment complex, now named Heritage Park, met with management to discuss their problems again on Thursday night. The meeting was a follow-up to a meeting that took place on May 30, during which a list of demands were presented to the ownership group.

On Thursday, representatives of Heritage Park's development group The Benoit Group and the new management group LEDIC Management, brought on after the May 30th meeting, addressed the list of demands and tried to convince disgruntled residents that more changes were coming.

A few of the demands, such as the hiring of a certified maintenance staff and the implementation of consistent office hours, have already been met. While many tenants seem satisfied with the way they have been treated by LEDIC employees now managing the property, conflict still arises around the issue of interior repairs.

Mold and electrical issues run rampant within the complex. Torian Priestly, vice president of The Benoit Group, used Thursday night's meeting as a forum to explain to residents why it is not that easy to completely renovate it in the time frame some tenants expect.

Priestly explained to those in attendance that of the $6 million dollars in loans used to acquire and make changes to the complex since being bought by The Banyan Foundation in January, only $50,000 is left.

The Benoit Group, which serves as a developer and asset manager for The Banyan Foundation, is now trying to make the changes they can with what they have while waiting for a crucial $500,000 grant, which they expect to come in six months.

Priestly said that the grant will be used on mold damage and remediation, among other things. Being told to wait does not sit well with many residents, who have watched ownership and management companies come in and out in recent years, sometimes leaving them worse off than they were before.

"What is Heritage Park going to do that the other management companies have only promised," said Doug Maxwell, a resident of the complex. "I have kids, and when I pick them up from school, we don't want to go home, and I hate that." Maxwell cited interior problems and heavy marijuana use by neighbors as a couple of the reasons he stays away from his own address.

Priestly listened to any residents who had complaints and encouraged them to sign a sheet of loose-leaf paper being passed around, promising that residents attending these meetings could be helped out as a priority. He stressed the fact that he needed help from all of the residents if things were going to get fixed in a reasonable time frame.

According to Priestly, Heritage Park is owed $38,000 in delinquent rent. Nearly 50 people have been evicted in 2012 alone, and the complex is at a 65 percent occupancy rate. Funds can't be gathered fast enough from the few who remain there.

The story of the pool seemed to play as the perfect allegory to the problem that Heritage Park faces. When asked if the pool would open at all during the summer, Priestly explained that it had been ready to go until a resident threw a diaper into the water, clogging up the filter's motor and causing tens of thousands of dollars in damage.

But there are still many problems facing residents on a daily basis that are no fault of their own. Tenants at the meeting stressed the need to have electrical problems fixed. Reports of loud buzzing noises throughout apartments and constantly flickering lights took precedent over even mold during a vote at the end of the meeting.

"If all of our homes burn down, there ain't going to be no mold to worry about," said one resident during the vote.

Luis Rodriguez of Action NC, an activist group who has been working for months with Heritage Park residents, announced at the meeting that he believes he has been able to see some improvement in management. Some people are even seeing results.

Adrianna Hodges was ecstatic when she was told earlier on Thursday that some major repairs would be made in her home. Her carpet will be replaced and the ceiling in her 2-year-old daughter's bedroom will be fixed up from its poor condition.

"I got the best news ever today and after that, I can wait [the six months for the grant] for all the smaller little fixes," said Hodges.

But for some, it will be six months or longer until their big problems are fixed, and waiting can be uncomfortable when they've been told the same sort of things before. After the meeting, Maxwell was happy with what he heard but still unsure of what to think.

"I'd like to believe it's all going to happen, but we've had smoke blown up from behind us so many times that we will just have to wait and see," he said.