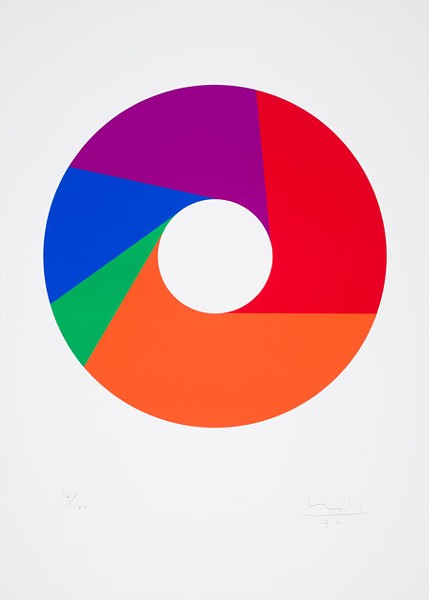 Concrete art falls along the lines of mathematical and geometric foundations, in that there seems to be a formula lurking beneath the shapes, colors, patterns and plains. In the Bechtler Museum of Modern Art exhibit Max Bill: Selected Works, viewers get a glimpse into works by the Swiss artist largely responsible for creating this movement, which has echoes in much of today's commercial and creative art.

Bill studied at Bauhaus in Dessau, Germany, under prominent artists like Paul Klee ("Senecio"). The vastness of creative disciplines would later mold his careers as a painter, sculptor, architect, industrial designer, graphic designer and writer.

The exhibit, hosted in the Bechtler's small second floor space, is comprised of 12 lithographs, serigraphs and sculptures created between 1935 and 1979.

Of the lithographs and serigraphs, there are striking similarities: The works have a graphic feel, with shapes (triangles, rectangles, squares, diamonds) and color patterns arranged through color prisms and randomly sequenced formats. "Achtteiliger Rhythms" ("8-Part Rhythms") is a lengthy horizontal piece that displays triangular patterns. These fall to form subsequent triangular patterns of different colors. Another work, "Neue Werke" ("New Work"), makes use of squares within squares, some tilted to create sloped rise-run triangles and an illusionary effect.

"Komposition in Funf Farben" ("Composition in Five Colors") seems to reflect Bill's interest in the Möbius strip. And an untitled piece from 1972 hangs vertically, with only very thin rectangular shapes lined with congruent patterns that resemble wallpaper strips.

The interesting thing about many of these works is the timelessness of the designs. Drive underneath the freshly painted bridge at N.C. Music Factory or eye a Samsung Galaxy S5's default color prism wallpaper for examples of how the concrete art form and people like Max Bill have shaped art's presence in billboards, flyers and graphic designs. To viewers of an abstract mindset, this art form appears pre-arranged, systematic and formulated, but to others, it may just feel like a lesson in carefully arranged shapes and colors.

Bill's "Art for Research: Five Piece Ring" is a circular doughnut with miscellaneous pie-like shapes; each, however, stays connected to its inner white core. Anyone see a similarity to the modern-day Google Chrome icon?

Bill's artwork isn't restricted to primary and secondary color palettes, though. His sculptures follow a similarly innovative format, but with the emphasis shifting from color to structure. There's a moon-like wooden sculpture with triangular cuts to its core, a white plexiglass piece with shapes stacked and shifted like a twisted Rubik's Cube and a granite piece that resembles a small spiral wishing well. The latter is tipped sideways so that if someone looks through the round hole in its center, they can see the "Kunst fur Forschung" ("Art for Research") piece. Arranged this way, on purpose or not, viewers who'd like to explore the exhibit thoroughly can be rewarded with a kaleidoscope of colors as seen through the small opening.

For an even more complete experience, pair this Max Bill showcase with a trip to the Bechtler's permanent collection and the Mario Botta: Architecture and Memory exhibit (through Sept. 1), which contains photos of architect Mario Botta's structural creations and models.