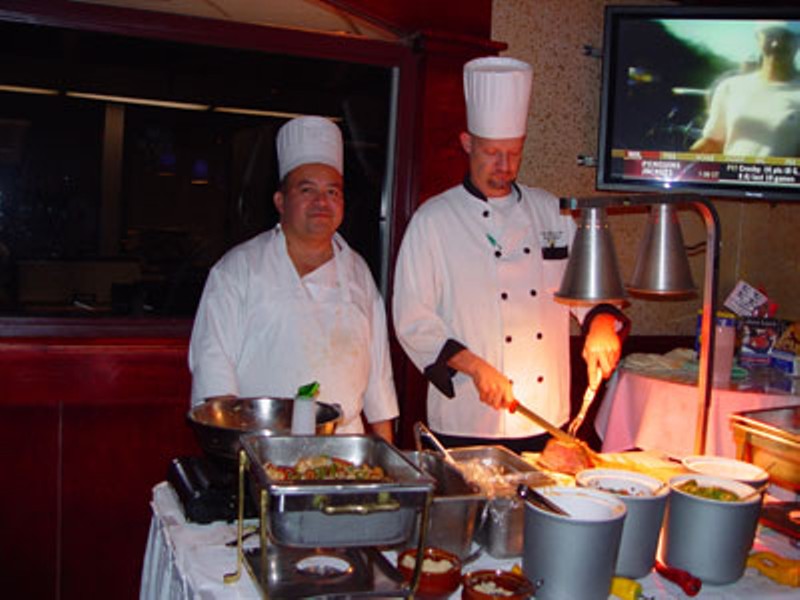 There are no strippers anywhere. None. And no gold for that matter. All there is, is one creepy old dude watching ESPN on a Jumbotron. "Are there any strippers at this strip club?" I ask the hostess, who is dressed conservatively in a buttoned-down blouse.

"They're all in a meeting right now. They'll be out soon," she says.

Riiight. This is like when little kids get behind the wheel of a car and pretend to drive. "Can I review the minutes?" I ask, but she's gone back to the bar. So, I'll make up my own stripper meeting itinerary instead:

A stripper finally makes an appearance (although this is an assumption I'm making based on her garter hose, leg suspenders and the amount of exposed tushy). The tall, skinny lady chooses the old dude to sit down next to instead of me. I feel rejected, but I must give her credit for recognizing that with age comes wisdom. Their riveting conversation proves it.

To cure my rejection blues, I turn to the buffet, which consists of only two chafers (tin buffet thingies) and a salad bowl. The salad is clearly the bagged, pre-chopped lettuce from the grocery, and the dressings aren't on ice. I choose a creamy ranch sauce, which seems appropriate. The only entree is watery spaghetti with Bolognese sauce. While I'm enjoying (bearing) the first plate, I hear a loud racket behind me. The chef is banging the Bolognese spoon against the chafer and glaring at me. "Don't leave the spoon in there!" He scolds.

"You can't even spell Bolognese," I think about sassing back, but neither can I without spell check.

Another stripper surfaces, looks around and joins the old guy. Damn! Two strippers for him, none for me. A stripper's sixth sense is detecting cheapness (recently I've received a great deal of heat in the office for habitually drinking Dr. Perky, a Food Lion brand of soda).

The other strippers finally descend a flight of stairs one by one, a clear stilettoed poon procession. Cybele, a stripper named after a goddess of fertility (who is appropriately shaped like the Venus of Willendorf) sits down next to me. Realizing I'm being rude, I look around for a sign that says, WARNING DO NOT FEED THE STRIPPERS, but I don't see one. "Do you want some spaghetti?" I offer Cybele.

"Even if it's delivered by an airplane?!" I start to make engine noises while flying the noodles toward her. She laughs a fake stripper laugh that sounds like a dying giraffe (I'm not exactly sure what a dying giraffe sounds like, but this would be my guess).

Cybele takes me to the stage and encourages me to tip Trinity, a baby-faced waif with stretch marks. "Hold out your dollar and she'll do something special for it." I follow directions and soon Trinity turns into a cat -- a cat who begins to purr in the vicinity of my crotch. I begin to wonder what other animals she can impersonate.

"Now do a turtle. A sexy turtle," I request.

On Mondays, I'm told, the chef doesn't put forth much effort on the buffet because not many people come out. Other days, they offer a larger spread for only $5. Even without clientele, the 10 strippers must pay the club $3 for the right to use it. If they don't get private dances or tips, they don't get paid. Today, Cybele is in the negatives. She's made only one buck the whole day ­­(from me because I felt bad).

I ask Cybele if men have ever had "accidents" during a VIP dance (a more expensive, higher contact private dance). In more than a decade of stripping, it's only happened twice, she says.

Trinity the twig, who has come to sit with us, laughs. "Then you must not be good."

Cybele proceeds to tell a story about one guy she had in the VIP room who got so excited that he ran out, saying he'd return in 20 minutes.

"Maybe he had to take a shit?" offers the ever-classy Trinity.

Cybele puts the mystery to rest. "No, he said he was going to a massage parlor to get jacked off."

This buffet is considerably more popular. Actually, it's on the verge of hip. Yuppies and women are as common as the old vets. The chef at the Men's Club boasts 70 items on his spread, but eight of those items are different salad dressings. Still, the food is above average, and for $9.75, all you can eat is a steal. Unfortunately, there's a catch. Tap water costs $3.75, so if you're on a budget like me, I recommend sneaking into the bathroom and drinking out of the sink. Scooping water from your hands works, but the head under the sink technique cuts down on wasted H20. I went to the boys club with four other CL staffers. Despite being the only one there actually doing research for my job, I somehow got shafted with a seat that faced the wall. Thus, I can not say much about the dancers other than I'm pretty sure they had butts.

The food is exactly the same as the Men's Club, in quality not quantity. At $14.75, the extra five bucks must be for the Uptown location. After I've eaten all I can, a Polynesian dancer asks me if she can sit down. I say OK, not aware she means on me. She tells me I'm cute and asks if I like football. Speaking of football, two pigskin players dance here: a defensive end and a free safety. They aren't Panthers, they're Carolina Queens. Eighty percent of the team is gay, Destiny claims, not including her.

"It's strickly dickly for me," she says.