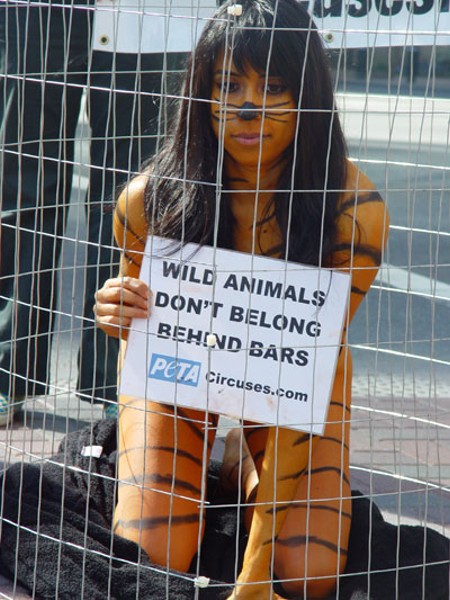 On a 47-degree Tuesday afternoon with a steady wind blowing from the north, Jabeen Akhtar, painted like a tiger, stepped out of her black robe at the corner of Trade and Tryon streets and crawled into a cage. The first-time exhibitionist was topless, concealed only by pasties and her black and orange body paint.

The publicity stunt was orchestrated by People for the Ethical Treatment of Animals (PETA), in protest of the Ringling Bros. and Barnum & Bailey Circus, which comes to Bobcats Arena on Wednesday, Feb. 22. PETA alleges the circus commits numerous violations against the Animal Welfare Act, backing up the claim with case documentation and hidden video footage.

Among the grievances: inhumane storage of animals, torture with electric rods and bull hooks, neglect leading to suffering and death, intentional killing of animals afflicted with illnesses. PETA believes the use of animals in circuses is outdated and would like to see Cirque du Soleil, an all-human acrobatic troupe, become the universal circus model.

Between noon and 1pm, males on their lunch breaks stopped in front of the Bank of America building to snap photos of the half-nude woman. One of them, when asked how he felt about animal treatment in the circus, responded, "I want her to move that sign so I can see her boobs."

Marta Holmberg, an intern with PETA on the anti-circus nudism tour, defended the tactic: "The way society is today, you have to do things like this for people to pay attention."

Judah Ragin, another lunchtime passerby, had intended to take his kids to the circus, but now says he'll boycott it. "The least they can do is feed their animals and take care of them the right kind of way," he said.

Crystal Drake of Ringling Bros. production company Feld Entertainment, denies all of PETA's allegations: "The animals are the superstars of our show and we treat them that way."