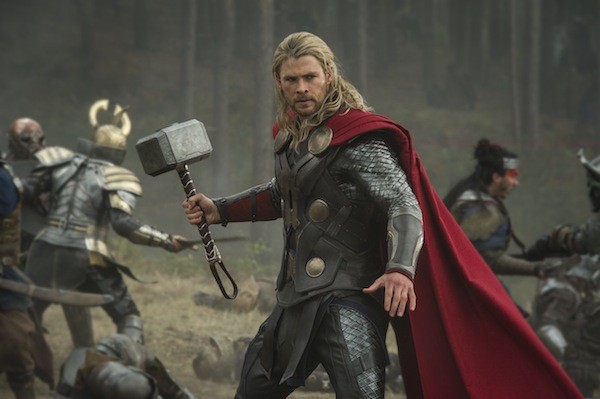 Recently rewatching 2011's Thor for the first time since its original release, I was pleasantly surprised by how I enjoyed it more this viewing. While recommending it with reservations when it first hit theaters, those initial flaws (most related to the script) seemed less conspicuous on this go-around, with the positives (most related to the characterizations) managing to more forcefully hold onto center stage. So given this tidbit, it's entirely possible that Thor: The Dark World, which I'm similarly recommending with reservations, will earn an extra half-star when I revisit it in 2015, on the verge of the release of Thor: Revenge of the Fallen or Thor Into Darkness or whatever else they might end up calling the inevitable sequel to the sequel.

In this outing, which (like Iron Man 3) takes place in the aftermath of the events that transpired in The Avengers, Thor (Chris Hemsworth) is busy implementing peace (via bloody battles, of course) throughout the realms surrounding Asgard while half-brother Loki (Tom Hiddleston) has been sentenced by their father and king, Odin (Anthony Hopkins), to eternal imprisonment. Meanwhile, down on Earth, scientist Jane Foster (Natalie Portman), upset that Thor never returned as promised, tries to move on by embarking on a date (a welcome appearance by Bridemaids' Chris O'Dowd) but mostly throwing herself into her work. The latter leads to her discovery of a mysterious substance, the Aether, that's being sought out by an old Asgardian foe named Malekith (Christopher Eccleston), a Dark Elf whose race was largely wiped out by Thor's grandfather centuries earlier. Malekith will stop at nothing to get his hands on the Aether, and his determination inevitably leads to the expected destruction as well as an unexpected death or two.

Thor: The Dark World contains almost as much humor as it does CGI, and that's for the most part a welcome development. While the antics of Kat Dennings and Stellan Skarsgård as Jane's colleagues occasionally grow tiresome, Hiddleston continuously hits home runs with the material that's handed to him, from calling Thor a "witless oaf" to using his camouflaging abilities to appear as another Marvel superhero (a great gag). Hemsworth's easy-going charm allows the God of Thunder to also mine much of the mirth, as what he does with his hammer Mjölnir when entering a house. And as the cherry on top, the requisite Stan Lee cameo also yields worthy dividends.

As with the first film, the characters and their interactions again provide all the high points (the exception is Hopkins, a colossal bore as Odin), with the cluttered storyline and routine action sequences jockeying for place position. The final battle, set in London, does manage to be exciting, but when an earlier sequence finds Asgard being attacked by spaceships, it's clear that the CGI overkill is under way.

Incidentally, be sure to stay through the entirety of the closing credits. That may seem like a no-brainer for a superhero flick, but be aware that Thor: The Dark World includes not one but two end-of-film teases, and since this fake out caused practically everyone to clear out after the first appeared shortly into the credits, less than a dozen folks remained for the final sequence. Now whether that second bit is worth the wait is debatable, but at least you now know it's coming and can plan that auditorium exit strategy accordingly.