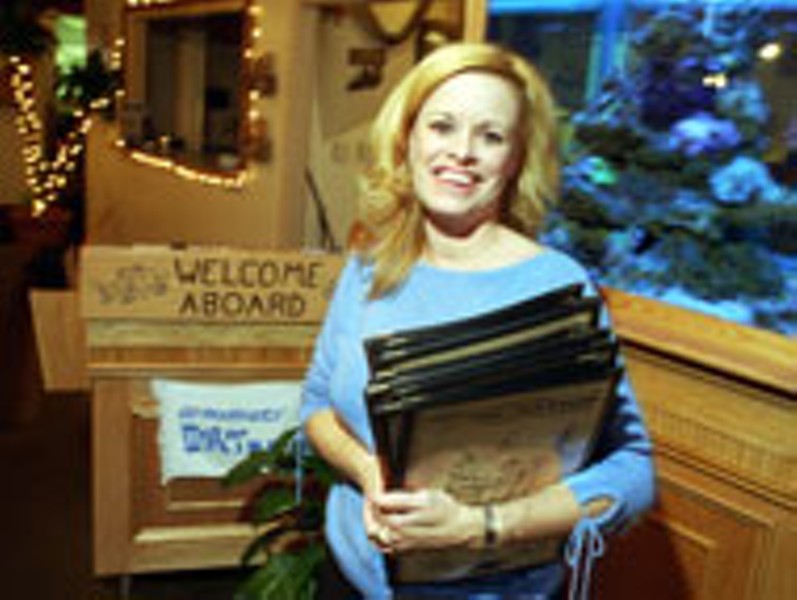 Radok AHOY! Captain Steve's Family Seafood Restaurant manager Kelly Gardner welcomes you aboard.
If you think a fish camp is the place kids go during the summer to learn how to cast, you're not from these parts, are ya? A fish camp is a restaurant dedicated to fried foods, primarily fish and seafood. Local legend has it that the concept of fish camps started on the banks of the Catawba River during the Depression. Local fishermen fried their catch in old wash pots filled with lard and sold them to local mill workers. Eventually some fishermen added metal roofs over their frying pots and soon the concept caught on. Subsequently fish camp restaurants were constructed. The food served at fish camps was freshly caught deep-fried river or ocean fish served with tartar sauce, hushpuppies, and slaw. Fish camp restaurants are among the oldest continuously operating restaurants in our area. Many were started by returning soldiers right after World War II and quickly became popular not only as eateries but as social gathering places.

One of these was the Hide-A-Way Inn Fish Camp on Monroe Road, which became a semi-legendary part of local pre-boom culture. Last summer the owners closed their restaurant after decades of serving fried foods. A restaurant broker approached Steve Mantikas and partner Pete Elefandis about taking the space. The partners had two successful Captain Steve's fish camps in South Carolina, one in Fort Mill, which opened in 1996, the other in Rock Hill. Steve Mantikas commented, "Our lease was up on our Rock Hill space. I knew that area of Charlotte and I saw the opportunity was there since many of our customers are from Charlotte. And the Hide A-Way had been successful there for 50 years. It was a good fit."

Both Mantikas and Elefandis grew up in restaurant families. Mantikas' father owned Johnny's Drive-in in Locust, NC, and then Mr. C's on Monroe Road about 30 years ago when Mantikas was seven or eight. Mantikas said, "I grew up in restaurants. My first job was as a dishwasher when I was 13." Fish camps were a favorite with his family. "Back then we used to go to Lineberger Fish Camp in Gastonia," he continued.

Since opening three months ago, the 400-seat Captain Steve's Family Seafood Restaurant has become a mecca for those with large appetites. On some nights, the wait line snakes out the door while folks cruising for a parking space cause traffic snarls on Monroe Road. Inside, the rapaciously hungry, waiting throng packs the center hall, which sometimes overflows into the paths of servers carrying towering platters.

The interior of the building has not radically changed since the Hide-A-Way Inn. Although a large salt water fish tank containing all the cast members of Finding Nemo ("Look Mom! There's Dory," squeals a little girl) is in the front, the old rustic, and very uncomfortable, non-cushioned hand-hewn oak booths are still there. The lighting has been updated, but the overall appearance is plain-faced fishcamp-esque with a fleet of sturdy chairs for hearty diners.

Of the fried foods, the onions rings are battered and crispy while most seafood items maintain a tender interior. If you don't like fried foods, choices are limited and, honestly, why are you in a fish camp in the first place? But, there are salads, steaks, and broiled fish for those who need to go against the grain. However, the best choices are the flattened marinated grilled chicken breast prepared with a light touch and the paprika-dusted scallops.

Portion size and price is what keeps folks packed in here. Entrees run from $6.95 for four stuffed devil crabs to $21.95 for a 14-ounce ribeye and a lobster tail. Kids under 10 eat free from the kids' menu on Wednesday.

The service at Captain Steve's is not subtle, and is rushed. T-shirted servers may bring an order before offering utensils, while dish presentation is slapdashed and piled high. But this is part of the longtime appeal of a fish camp: towering platters of fried food, casual service, and lots of styrofoam take-home boxes. If this appeals to you, then Captain Steve's will, too.

Not since the Grapevine in the Park Road Shopping Center closed years ago has Charlotte had a full-service Greek restaurant -- unusual, given the large number of Greek American restaurateurs in town. However the Photopoulos family is opening the 150-seat Greek Isles Restaurant at the end of February in the spot next to Jillian's at 200 East Bland Street in SouthEnd. The restaurant will be opened for dinner at first. Lunch will follow. Restaurateur Panos Photopoulos, who also owns the French Quarter downtown, said, "The food will be 100 percent authentic Greek." His partners in this restaurant are his sons George, Greg, and Frank. Call 704-444-9000.

"It's been a great ride," said Sara Mangione, daughter of Roberto and Anna Mangione who closed Mangione's on January 28, after 27 years in business. The Mangiones sold the lease to 1524 East Boulevard to a restaurateur who plans to open a Japanese-French restaurant in six weeks, Sara reported. Her parents have been known for their Italian cuisine since the early 1970s when they opened the first La Strada on Central Avenue. "It's hard to leave all the people. There has been a lot of tears," continued Sara. "But we have always managed the restaurant ourselves. It was difficult on my dad after my brother left two years ago. The restaurant was Dad's life, but it is time for him to retire." Roberto Mangione may have left the brutal hours and stressful life of the restaurant business, but he will continue to have a hand in the wine business. His company, with partner David Grosso, Viniitalia imports Italian wine.