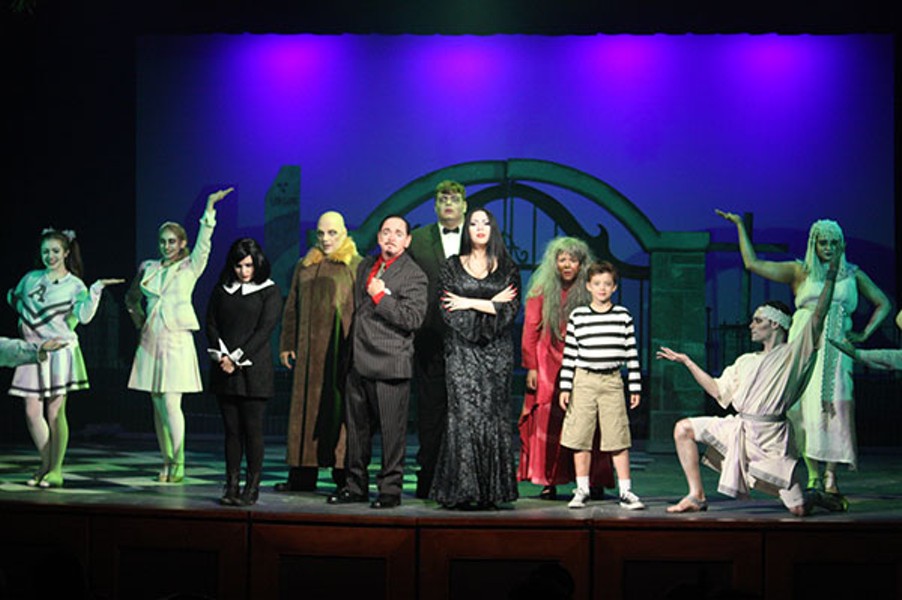 The Addams Family runs through May 29 at Theatre Charlotte.

Gloomy lighting and cobwebs. Raging thunderstorms and decrepit dungeons. The whole Gothic horror thing, on screen or onstage, is a carnival of special effects — the bizarre compounded by the supernatural. Vampires, ghosts, werewolves, and monsters don't often wear jeans and T-shirts. Costumers, wigmakers, prosthetic manufacturers, and makeup artists work overtime to get the right look. Buckets of blood must spew on cue, get mopped up, and spew again for the next take.

Even though fangs and gore aren't factors in The Addams Family, there was sufficient tech wizardry in the 2010 Broadway musical to give Theatre Charlotte pause. Past springtime hits at the Queens Road barn like Rent, Hair, and Jesus Christ Superstar haven't required fog, fangs, or extensive set changes. As we reported back in 2011 when Charlotte was the third city it visited, the national Addams Family tour cut back significantly on the tech pizzazz because it was so daunting. On Broadway, the curtain was so active, talented, and amusing that a Tony nomination wouldn't have surprised me.

There's a vestige of that precocity before the curtains part, but don't expect it to last. On opening night, the raging storm that sound designer Erik Christensen concocted to assail the Addams mansion was mighty enough, but it inexplicably subsided in a matter of seconds. Morticia's flaming red tango skirt peeped through her funereal black evening gown at least a minute too early, spoiling the surprise. And the apple that Wednesday Addams was destined to split with her crossbow on her fiance's head fell apart when Lucas Beineke first brought it in from the wings, half of it popping hilariously into the first row of the orchestra.

Perhaps because the script by Marshall Brickman and Rick Elice seemed more akin to the Addams Family sitcom on TV than the darkly comical Charles Addams cartoons in the pages of The New Yorker, the musical drew no more respect from New York critics than its Mel Brooks cousin, Young Frankenstein. That lack of critical cachet may explain why there are so many relatively unfamiliar names in the cast. Rest assured, the uptick in no-shows at Addams auditions hasn't been replicated at the box office. Locals filled the house pretty well for the opening and brought plenty of enthusiasm with them. Throughout the hall, finger snaps came resoundingly on cue during the overture.

Audience enthusiasm is the main thing stage director Jill Bloede, music director Zachary Tarlton, choreographer Lisa Blanton and the title characters keep going, earning almost every bit of the fervor with their high energy. With a storyline that echoes You Can't Take It With You, the Addams family has a license to be every bit as weird as George S. Kaufman's Sycamores. Each of these families has a mutant daughter who wishes to couple with a normal person, each of the daughters' beaus has parents who are conspicuously boring and respectable, and each of the hosts launches a game at the dinner table that causes the guests to reveal a deep-set fissure in their marriage.

Wednesday is the new wrinkle in the old formula, which most recently recurred on Queens Road in La Cage aux Folles. This mutant child is not as normal and wholesome as previous defectors who fled their kooky coops. No, our rockin' culture has overtaken the Addamses to the extent that Goths like them have established themselves on the fringes of high school life. Only those who enter the hall with black lipstick will fully recognize Wednesday as a kindred spirit. Yet the crossbow keeps her securely outre for everyone.

As a result, Wednesday can rock when the whole William Tell scene circuitously makes its point in the "Crazier Than You" duet. This role is not at all as humdrum as Alice Sycamore, and Emily Roy takes full advantage of Wednesday's weird glamor. Standing next to Morticia, Roy looks puritanical and punkishly pugnacious at the same time — and she can definitely belt her half of the duets. In his debut, Christian Regan is noticeably underpowered as Lucas the apple-bobbler, but his shortcomings are poignantly effective. After all, he and his family hail from Ohio.

"A swing state!" is how the horrified Gomez describes the unfathomable gulf. But you look at how sloppily Lucas is dressed and you already see that he is more than meeting Wednesday halfway. Regan talks his talk far better than he sings it.

Challenged by Blanton's choreography and a Morticia decades younger than he is, Kevin Roberge surpasses himself as Gomez, even if he is visibly panting at the finish line. He may not have the essence of this unctuous patriarch as thoroughly as Nathan Lane did on Broadway, but he has the Gomez sound perfectly, and there is such fatherly pathos when Roberge sings "Happy/Sad" in Act 2 that the power of it took me by surprise. Followed by "Crazier Than You" before Gomez teams up with Morticia for "Tango de Amor," the hits do keep coming as Roberge gasps for breath.

Nor is Aubrey Young less than breathtaking as the preternaturally tensile Morticia, though her dress is disappointingly less revealing than Bebe Neuwirth's was on Broadway. Young is also less Zombie-like than Neuwirth, further altering the icy marital chemistry. Ah, but when Morticia pines for the sewers of Paris, Young is just as wry. I was every bit as impatient as the red skirt for the tango to begin, and when Young stretched herself into its most extreme choreography, her youth provided ample rewards.

With the Addamses' pet squid axed from the script, Mal Beineke is no longer the sort of role that would warrant Terrence Mann's bravura. Instead of being asked to sing the bodacious "In the Arms of a Squid" in the Act 2 denouement, Jonathan McDonald merely piggybacks onto the "Crazier Than You" duet playing Mal with Jenn Grabenstetter as Alice Beineke. There is no diminution of the eclat Grabenstetter is allowed to make in Act 1 after Alice drinks the misdirected potion in the "Full Disclosure" game. She's a pure undersexed animal in the "Waiting" showstopper.

Delicacies are doled out deeper into the cast. After stomping around inarticulately on platform shoes for nearly the entire evening, Johnny Hohenstein makes good on his liberation as the family's Zombie butler Lurch. And who could possibly have a more ardent crush on the moon than Vito Abate as Uncle Fester? Abate was simply born for this role and the epic passion of "The Moon and Me." The lightbulb prop he messes with was still a work-in-progress on opening night, but his rocket backpack was pure bliss.

The wig and costume Vanessa Davis wears as Grandmama and the grimy makeup sported by Jackson Davis as Pugsley, Wednesday's masochistic little brother, help to make their Theatre Charlotte debuts successful. Up on Broadway, if you were buried in the Addams Ancestors ensemble, you went home with a paycheck. Down here in Charlotte, it's nice to find that the eight members of our ensemble are individualized in the cast bios with such identifiers as stewardess, baseball player, and Greek.

Make no mistake, there's plenty of authentic Charles Addams embedded in the script, nowhere more effectively than at the end. What Gomez and Morticia say to one another in the closing dialogue is quoted verbatim from an Addams cartoon. It still worked the third time I heard it.