Theater review: Smoke on the Mountain 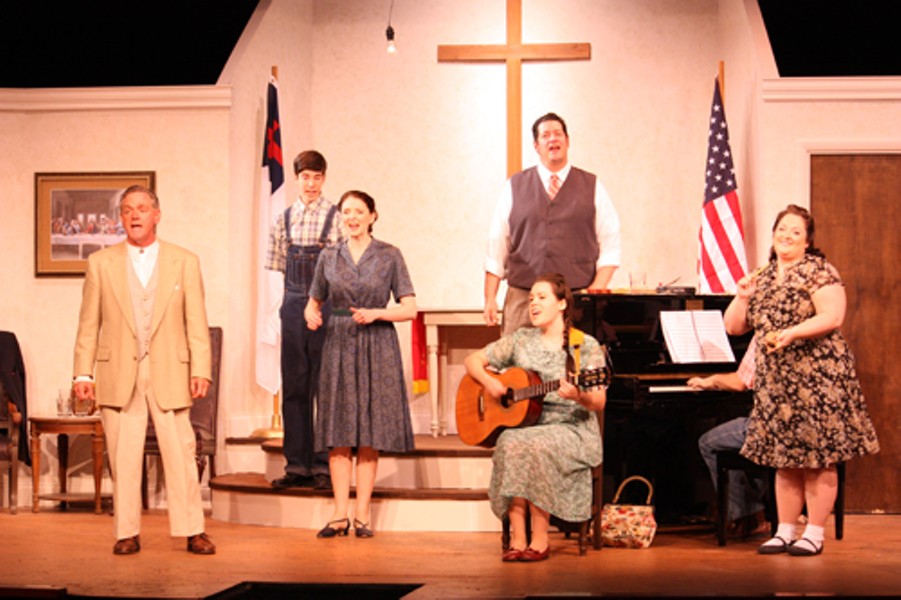 That front-porch ambiance ushered in by Story Slam last summer seems to be contagious. Hanging out at new musical openings last weekend exposed the missus and me to some genuine cracker-barrel charm. First on Friday night at Theatre Charlotte, there was Smoke on the Mountain, a charming little hootenanny that I had managed to avoid until the late Pineville Dinner Theatre served it up with a fresh menu of countrified Sunday vittles back in 2007.

While some who saw that production down yonder might miss the fine home cookin', director Corey Mitchell has worked a minor miracle with his unpaid cast -- half of whom are making their Theatre Charlotte debuts -- because I only rarely missed the professionals. Mitchell takes the rusticated pickle humor that drenches Connie Ray's original script, set it in 1938 Mount Olive, and sprinkles another pinch or two of salty humor. Particularly tasty is the surprise he plants at the end of Act 1.

Just as deftly, with a couple of stained-glass windows flanking the audience and a few well-timed forays by the cast into the crowd, Mitchell convinces us that we've been transported up into them thar hills for an old-time Saturday night jamboree. Scenic designer Adam York has a decisive edge on Pineville Dinner in simulating Rev. Mervin Oglethorpe's "Mount Pleasant" Baptist Church and pulpit, and the four-piece band, led by Ryan Deal and featuring Jim Duckworth in the banjo-pickin' solos, has all the down-home assurance you could wish for.

If it's hard to distinguish between simulated backwoods awkwardness and genuine inexperience among these actors, that's because Mitchell has effectively insisted that none of them remain soft-spoken. Winston Sims is adorable as the somewhat callow Rev. Oglethorpe, shuttling as smoothly between modesty and priestly lechery as he does between propriety and rambunctious celebration. In the most impressive of the debuts, Meredith Owen is delightfully obstreperous as June, the non-singing member of the Sanders Family, signing earnestly for the benefit of the deaf though none are present.

Sara Johnson as Denise Sanders, the girl twin, is comparably subdued, but only to the extent that her performance seems totally artless and natural. On the other hand, Sloane Wood as the girls' mother Vera needs to be much more forceful in projecting her matriarchal eccentricities. Nicholas DeLaCanal, as boy twin Dennis, is far more successful in capturing the aspiring preacher's schizoid essence.

Two more familiar faces round out the cast, Kevin Roberge as Burl, Vera's spouse, and Matthew Corbett as Stanley. Corbett delivers the most dramatic of the family's testimonies -- you didn't think an upright Christian family just gets up and sings, did you? -- with an admirably thin and convincing overlay of regret. A rather polished and professional performer, Roberge almost seems out of place as Sanders Family patriarch, but there isn't much glue anywhere else to keep these tuneful troubadours together.

The tunes are a mix of the familiar and the outré, with the audience occasionally invited to sing along. If you can stand "Bringing in the Sheaves," the rest will be gravy. My favorite among the traditionals was "I'll Fly Away," but it's hard to resist the comedic verve of "Christian Cowboy" or the sinful "I'll Live a Million Years" that causes the big ruckus.