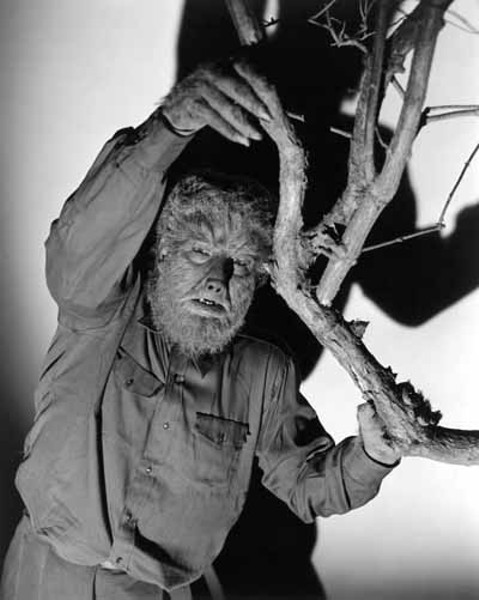 HAIRY SITUATION: Lon Chaney Jr. in a publicity shot for The Wolf Man.

A mild disappointment from Warner Bros.'s richest period (the '30s and '40s), Manpower (1941) stars Edward G. Robinson and George Raft as best friends who work for a utility company, risking their lives fixing power lines during stormy weather. Yet the real stormy weather arrives in the form of Dietrich, a hard-luck woman who ends up coming between the boys. The dramatics are shaky (Raft's somnambular performance doesn't help) while the comic relief is more forced than usual.

Tarzan's Greatest Adventure (1959) is one of the best Edgar Rice Burroughs adaptations not to star Johnny Weissmuller. Here, it's Gordon Scott handling jungle duty, and while he and leading lady Sara Shane are merely adequate, the villains (among them Anthony Quayle and a pre-007 Sean Connery) and the action sequences are exemplary, as the lord of the apes sets off in pursuit of murderous diamond hunters.

Not to be confused with the nifty 2006 horror film of the same name, Slither (1973) stars James Caan as an ex-con who's entrusted by his dying friend (Richard B. Shull) with clues that will lead him to the whereabouts of a large stash of cash. Along the way, he hooks up with his friend's former accomplice (Peter Boyle), the latter's mousy wife (Louise Lasser), and a chatty thief (Sally Kellerman). It's all low-key and amiable, although Kellerman's character is tough to take in such large doses.

Even more likable ­– though no less hit-and-miss – is So Fine (1981), a quirky comedy in which dapper college professor Bobby Fine (Ryan O'Neal) is strong-armed by a New York mobster (Richard Kiel, Jaws from the James Bond films) into helping Bobby's father (Jack Warden) run his failing clothing business. Bobby accidentally invents see-through jeans that save the company, but his own life is at risk once he embarks on an affair with the gangster's wife (Mariangela Melato). Warden and Fred Gwynne (as the English department chairman) score highest.

One of the most notorious bombs of the early 1980s, Under the Rainbow (1981) is an abysmal comedy in which a Hollywood hotel is overrun by scores of little people all auditioning for the parts of Munchkins in The Wizard of Oz; Chevy Chase headlines as an FBI agent uncovering Axis elements at the establishment. This desperate dud is surprisingly mean-spirited toward its stars ("You're bad little people!" one character barks. "You deserve to be short!"), while the gags are a never-ending series of groaners (cracks one dwarf after dallying with a tall prostitute, "That's the first time I've ever gone up on a woman!"). Yeesh.

There are no extras except for the theatrical trailer on So Fine.

WHIP IT (2009). Despite the title, you won't find any Devo on Whip It's soundtrack, but the Ramones and .38 Special both make vocal appearances in this film that marks the directorial debut of Drew Barrymore. If those two songs ("Sheena Is a Punk Rocker" and "Caught Up in You," respectively) made the journey from Drew's iPod to the screen, more power to them, as they're certainly in tune with the rock 'n' roll aesthetic on display throughout this rowdy, rebellious film. Juno's Ellen Page once again flashes her impressive acting chops, this time playing Bliss Cavendar, a 17-year-old whose mother (Marcia Gay Harden) is hell-bent on entering her in every beauty pageant that pops up anywhere near their rundown Texas town. But Bliss eventually finds her true calling when she discovers the sport of roller derby: Adopting the name Babe Ruthless, she lands a second family in the form of her sisters on skates (played by, among others, Kristen Wiig as Maggie Mayhem and Barrymore as Smashley Simpson). The trappings are all familiar – a disapproving parent, a competitive rival (Juliette Lewis as hard-as-nails Iron Maven), scheduling conflicts, and the climactic championship match – but in the capable hands of Barrymore and scripter Shauna Cross (adapting her own novel, Derby Girl), they're all given a fresh coat of paint that allows the movie to easily skate by on the charms of both its novel setting and its gung-ho cast.

The only extras on the DVD are a handful of deleted scenes.

THE WOLF MAN (1941). "Even a man who is pure in heart and says his prayers by night, may become a wolf when the wolfbane blooms and the autumn moon is bright." For approximately a quarter-century, Universal Pictures was responsible for producing the lion's share of the classic monster movies, atmospheric horror yarns starring such genre superstars as Lon Chaney, Boris Karloff and Bela Lugosi. Yet even with a canon that includes the definitive versions of (among others) Frankenstein, Dracula and The Phantom of the Opera, The Wolf Man has always remained my favorite of the studio's prolific output. Lon Chaney Jr. stars as Lawrence Talbot, who returns to the British estate of his father (Claude Rains) after having spent the past 18 years in America. While wooing the local beauty (Evelyn Ankers) one evening, he gets bitten by a werewolf and eventually succumbs to the curse himself. Like most of the Universal crop, this intelligent and sophisticated picture unfortunately sports a brief running time (70 minutes), but the screenplay by Curt Siodmak manages to pack the proceedings with all manner of intriguing developments, including discussions on the duality of man as well as the place of superstition in a God-fearing world. Makeup artist Jack Pierce's werewolf design is superb, and the strong cast also includes Ralph Bellamy as the local constable, Lugosi as a doomed fortune teller, and Maria Ouspenskaya as the gypsy woman who attempts to help Larry.