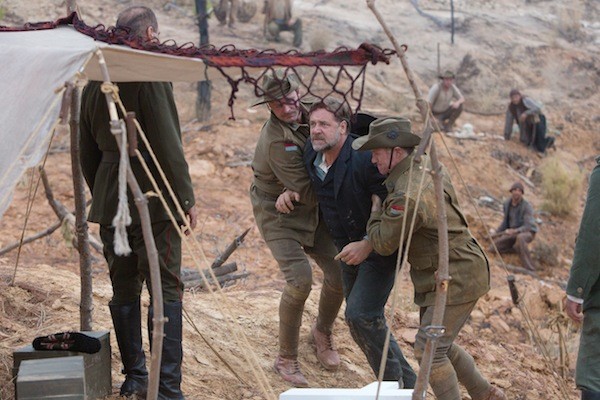 Taking a page or 12 from the playbooks of Mel Gibson, Kevin Costner and other A-list actors who decided to try their hand at directing on an epic scale, Russell Crowe makes his own feature-film debut with The Water Diviner, a sincere if dramatically shaky picture set after the close of World War I.

Crowe stars as Joshua Connor, an Australian farmer who journeys to Turkey with the intention of locating the bodies of his three sons and bringing them home. All were presumably killed in the Battle of Gallipoli, but Joshua is informed that civilians are not allowed at Gallipoli, which is now one massive graveyard. Undaunted, Joshua is determined to follow through on his mission, receiving unlikely assistance along the way from a Turkish officer (Yilmaz Erdogan) who commanded enemy troops at Gallipoli and a war widow (Quantum of Solace Bond girl Olga Kurylenko) who's managing a hotel in Istanbul.

Unlike Costa-Gavras' exemplary 1982 film Missing, this isn't a muck-raking expose as much as it's a personal tale told against an international canvas. That's not to say the movie doesn't comment (subtly and otherwise) on the absurdity of armed conflict, but it's clearly more interested in following Joshua as he undergoes his arduous task against impossible odds. But the more Joshua searches, the sillier the film becomes, as the palpable sense of loss and regret that hangs over the first half like a London fog eventually dissipates in the wake of more conventional elements (daring escapes! last-minute rescues! a lady for every fella!) that seem at odds with the more elegant movie the actor-director was apparently trying to make. The Water Diviner qualifies as a valiant, even worthwhile, effort, even if in the long run it's nothing to, err, crow about.