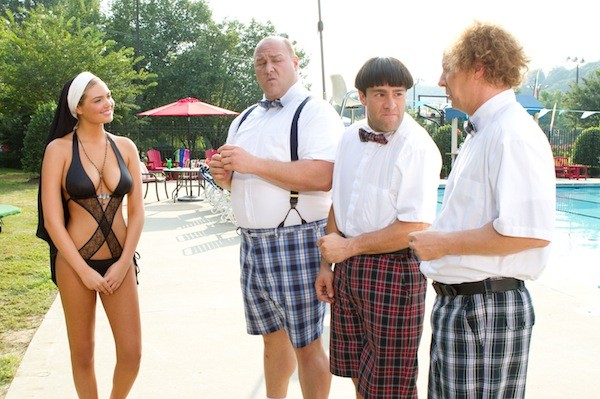 As a longtime groupie of the comic trio of Moe Howard, Larry Fine and Curly Howard (the last-named eventually replaced in succession by Shemp Howard, Joe Besser and Joe DeRita), I'm the proud owner of all 190 shorts The Three Stooges made between 1934 and 1959. Tellingly, I don't own the feature films in which they starred, not only because most of these efforts (the majority produced during the 1960s) found the team past their prime but also because with these guys, the less plot the better. Leave the features to Charlie Chaplin and Preston Sturges and Woody Allen and other comedians with something to say — when it comes to the Stooges, we want our nyuks fast and furious.

The necessity for brevity is just one of the lessons lost on sibling filmmakers Bobby and Peter Farrelly, who felt the world needed a 92-minute Three Stooges movie starring Three Stooges impersonators. Despite their game efforts, Chris Diamantopoulos, Sean Hayes and Will Sasso are never able to make us forget that we're not watching Moe, Larry and Curly — they're the cinematic equivalent of cover bands, competently going through the motions in a superficial manner but unable to compete with the real thing. They're tossed into a standard-issue plot concerning the clods' mission to raise a sizable sum of money in order to prevent an orphanage from going under. Bidding farewell to the nuns who run the place — among the sisters' ranks are Glee's Jane Lynch, Oscar winner Jennifer Hudson, Sports Illustrated model Kate Upton, and Larry David in drag — they head to the big city, where they become ensnared in a plot by a ruthless beauty (Sofia Vergara) and her hapless boyfriend (Craig Bierko) to murder her husband (Kirby Heyborne).

Smart scripting would have played up the premise of these old-fashioned Stooges set loose in a modern world, but only a couple of gags (involving Facebook and an iPhone) even glance in that direction. Instead, the film's jabs at contemporary relevancy take it where we least want it — but most expect it — to go: in the realm of potty humor. There's an endless sequence in which the three use hospital-ward babies as guns, holding up their naked bodies and shooting each other with streams of pee. Still, it's hard to say which is more excruciating, this sequence or the ones which give ample screen time to the cast of Jersey Shore. (You read that right: Snooki, The Situation and all the other open-mouth breathers rack up SAG minutes here.)

The same evening after sitting through this screening, in order to wash away the bad taste left by this film, I popped a classic Stooge short into the DVD player — 1940's A Plumbing We Will Go, to be exact. Now that's eye-poking, ear-twisting, nose-tweaking, head-banging entertainment.