The rise & fall of a Boomer Outlaw 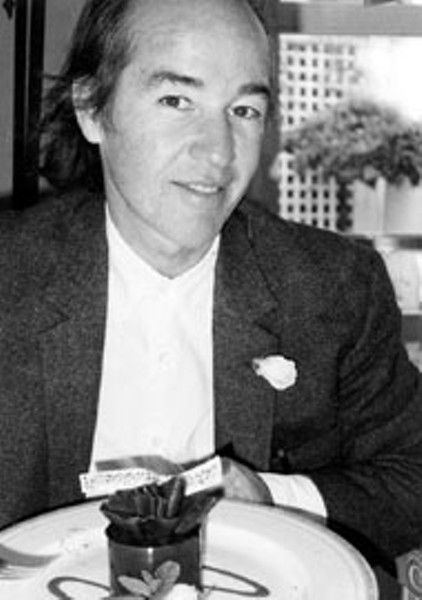 Gentleman Bank Robber Eddie Dodson
When NC native and former Charlotte resident Edwin Dodson was interred recently in his hometown of Shelby, it marked the end of a bizarre and bittersweet journey. The story began in the early 70s when, after living in Charlotte for a few years, Dodson moved to California and opened a successful and trendy antique shop on Hollywood's famous Melrose Avenue. For over a decade, he hobnobbed and partied with celebrities, models and designers. Unfortunately, Dodson also became addicted to cocaine and heroin -- which led him to become the most prolific bank robber in history. Dodson robbed a record-setting 64 banks, including six in one day, and served close to 14 years in prison. He was released last October, and passed away shortly afterward on February 21 from liver failure related to Hepatitis C and cancer. Just A Normal Kid

Dodson was born in Shelby on Christmas Eve 1948. His father, an insurance executive, died when Dodson was a baby, and he was raised by his mother and grandmother. Although money was tight, Dodson's mother worked hard at a textile plant to provide for her only child. Both his mother and grandmother were devout Christians and, while they were strict, they showered him with love and attention. As a youngster, he attended church regularly, played Little League baseball, and was in the school band."He was just a normal kid," says Marjorie Bass of Statesville, Dodson's first cousin.

"He was a cute, sweet, chubby little boy," says Janice Wilson of Blacksburg, SC, another cousin.

After graduating high school in 1967, Dodson enrolled at UNC-Charlotte to study art. By then he had fully embraced the hippie subculture, sported long hair, and lived with a couple of other like-minded folks in a big house (which has since been torn down) in Dilworth, at the corner of South Boulevard and East Boulevard. His mother and aunt, outraged at his lifestyle decisions, at times drove from Shelby and stood on the sidewalk outside Dodson's "hippie house" and quoted scripture, urging Dodson to change his sinful ways.

It was during this time that Dodson and a young woman named "Susan" met at Freedom Park.

"What I remember of Ed is that he was overweight, had long, straggly hair, and wasn't very attractive -- basically a scruffy-looking hippie," says Susan, who now lives in a small town south of Charlotte. "But he was a nice guy, he had a great personality, and was funny and kind. He was just sort of living day to day like so many other people."

At the time, Dodson was a small-time drug dealer, selling pot and acid to folks like Susan and her friends.

"I had my first acid trip with Ed," Susan says. "This was at the height of the whole hippie era in Charlotte. It was all kind of innocent."

Dodson and Susan remained casual friends for about a year, until Susan went off to college in 1969 and later moved to Seattle. However, she would hear from Dodson one more time, seven years later in a surprise phone call.

Dodson, still living in Dilworth, was busted for marijuana possession during a traffic stop in 1971. Facing a drug conviction and possible jail time, he and his girlfriend hit the road and eventually landed in Los Angeles in 1972, with Dodson living under an assumed name. He took to his new surroundings, and landed a job helping out at an antique store.

His good fortunes continued when his lawyer back in Charlotte managed to get his drug case thrown out. Dodson dumped his alias and opened his own antique store on Melrose Avenue. His natural affability, charm and gift for gab helped make his antique shop a success. It also became a favorite hangout for an artsy bohemian crowd as well as celebrities including Barbra Streisand, Joan Collins, John Lennon and Yoko Ono, Steve Martin, Liberace, Lily Tomlin, Tony Perkins, Timothy Leary, Steve McQueen and Jack Nicholson, who would become a good friend.

Dodson had indeed come a long way from his small hometown in North Carolina. But his adventures in La La Land would eventually take a big downhill detour.
The Gentleman Bank Robber

Timothy Ford, a writer and art dealer, arrived in LA in 1976. His buddy, "Bob," who had recently moved to LA from Seattle, picked him up at the airport and took him to the apartment of Eddie Dodson, a charming, dapper and somewhat flamboyant fellow who owned a trendy, hip antique shop on Melrose. The three friends were talking when Bob mentioned his friend Susan from Seattle. The more Bob talked about Susan, Dodson realized it was the same girl he had befriended in Charlotte. They called her on the spot. "I was in complete shock," Susan says of the unexpected phone call. "I figured I would never hear from Ed again. I asked Bob what Ed looked like, and he said he looked really good. He had lost weight, cut his hair, and was very stylish. He was even dating models and hanging out with celebrities. I just couldn't believe it. He had completely re-invented himself."